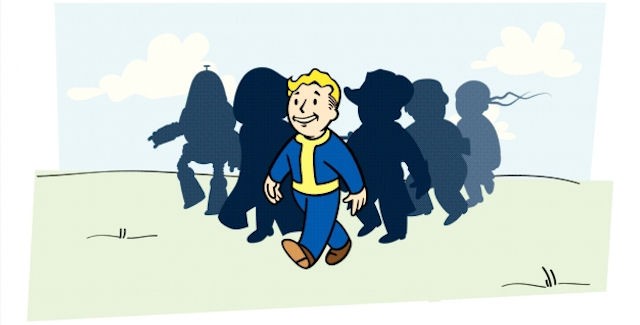 Finding all 13 Companion locations and have them join you will help unlock the following Achievement / Trophy:
* “Never Go It Alone” (20 Gamerscore / Bronze Trophy) — Recruit 5 Separate Companions.

The Timeline for all these in-game Companions locations is listed below.

How to find missing Companions?: Some of the Companions require you to do some missions for them before you get the option of asking them to join you. Some will join you right away after meeting you. While others you have to keep playing the main story to get access to them.

Between the 13 available companions, you can only have one companion with you at any given time.

How to find lost Companions? When you dismiss a companion, they’ll either go to your settlement in Sanctuary, or go back to the place where you found them in the first place.

Creating a bell and placing it within the Sanctuary settlement will make the people living there as well as your followers meet up at the bell’s location.

You can skip the waiting on a Companion to arrive, by putting down a Chair in your settlement, sit down on it and let an hour pass for him/her to appear right away.

Bonus Companion Perk: Each Companion has a unique perk that’s active as long as the Companion is following you, and regardless of the distance between you and Companion.

Death & Kill Tips: Companions cannot die, but when they are hurt badly enough, they’ll get knocked out until the end of combat.

On the opposite side, if your Companion kills an enemy solo you don’t get XP for the kill. You have to at least do some damage to the enemy to be given the XP reward for its kill.

Karma Note: Companions can be directed and can have more options if they like the Sole Survivor a lot, whether being a human, ghoul, synth, super mutant, a dog or even a robot. This is influenced by how the Survivor approaches the quests and talks to other people.

You’ll want them to see you as favorable as possible, because then you can issue all commands to companions, like sending them to pick up items, use objects or go to certain places.

Does the game save each Companions that joins you?: Yes, the game will automatically save the Companion you just asked to join you, so you don’t have to play to the end of the mission if you don’t want to.

Where to find all Companions in Fallout 4? The in-game locations for the Companions are described in this detailed video guide.

The Companions are listed in the video in the order that they appear in chronological order.

Timeline in minutes for the Companions Locations Guide:

• [00:00] — Companion Location #1: CODSWORTH can be found at the start of the game on the Sanctuary Hills. Not Quest related.
Companion Perk: Robot Sympathy
Perk Effect: +10 damage resistance against robot energy weapons
Companion Bio: A robot with the loyalty of waiting 200 years for your return and spending 10 of those years waxing your atomically stained floor. Codsworth can be found at your own house in Sanctuary Hills.

• [00:23] — Companion Location #2: DOGMEAT can be found at the start of the game at the Red Rocket Truck Stop. Not Quest related.
Companion Perk: None. But your Attack Dog perk can be used on Dogmeat.
Armor Upgrade: Dogmeat can be equipped with armor and handkerchiefs. He also starts with maximum affinity level.
Companion Bio: The dog is the second companion you will encounter as you progress through the main story. Shortly after you leave Vault 111 you’ll come across the Red Rocket Truck Stop, you’ll find Dogmeat here.

• [00:52] — Companion Location #3: PRESTON GARVEY can be found at Concord, at the Museum of Freedom. During the “When Freedom Calls” Quest.
Companion Perk: United We Stand
Perk Effect: when facing three opponents or more, +20% damage and +20% damage resistance
Companion Bio: Early in the game you’ll come across the town of Concord. There’s a quest there called When Freedom Calls. Complete that to unlock Preston as a companion.

• [01:54] — Companion Location #4: NICK VALENTINE can be found in Diamond City, inside Vault 114. During the “Unlikely Valentine” Quest.
Companion Perk: Close to Metal
Perk Effect: one extra guess and 50% faster terminal cooldown while hacking
Companion Bio: Nick Valentine is a detective that you encounter during the main quest line. Complete the quest Unlikely Valentine to unlock this companion.

• [02:46] — Companion Location #5: PIPER can be found in Diamond City. During the “Story of the Century” Quest.
Companion Perk: Gift of Gab
Perk Effect: +100% XP bonus for speech challenges and discovering new locations
Companion Bio: This feisty young companion is located in Diamond City. She helps you enter the city during the quest chain, speak to her after the quest objectives to make her a companion.

• [03:32] — Companion Location #6: CURIE can be found in Vault 81. During the “Hole in the Wall” Quest.
Companion Perk: Combat Medic
Perk Effect: heal 100 points if health falls below 10%; can only be used once each day
Companion Bio: Located within Vault 81, Curie is another robotic companion. you have to complete hole in the wall with the vault to make her your companion.

• [04:34] — Companion Location #7: PALADIN DANSE can be found in the Cambridge Police Station. During the “Call to Arms” Quest.
Companion Perk: Know Your Enemy
Perk Effect: +20% damage when fighting Ferals, Super Mutants, and Synths
Companion Bio: A member of the dreaded Brotherhood of Steel. A short distance from Diamond City is the Cambridge Police Station, in Boston. Once you speak with Paladin and join his faction wait for the reinforcements to arrive and complete his missions he will be available as a companion. Note that you have to wait/keep doing their Quests until Prydwen arrives for Paladin to really join you.

• [05:28] — Companion Location #8: CAIT can be found in Boston, in the Combat Zone. Not Quest related.
Companion Perk: Trigger Rush
Perk Effect: When health falls below 25%, action points regenerate faster
Companion Bio: Cait is deadly in combat and fantastic with locks. Head to the combat area within Boston and clear out (kill) all the Raiders there, Cait will join you soon after. Just talk to the two in the cage and he will send Cait with you.

• [06:23] — Companion Location #9: DEACON can be found in Old North Church. After completing the “Tradecraft” Quest.
Companion Perk: Cloak and Dagger
Perk Effect: +20% sneak attack damage, +20% Stealth Boy duration
Companion Bio: Another companion located off the beaten track. Head to the HQ of the Railroad and check in the Old North Church. He can also help you join a new faction. Once you’re far enough down the church’s hallways, gain access to the Boston Freedom Trail secret entrance by spelling out “RAILROAD” on the Freedom Trail Ring wall plaque. After you finish the Tradecraft quest he will join you.

• [07:56] — Companion Location #10: JOHN HANCOCK can be found in the town of Goodneighbor, at Scollay Square (in front of the Guns Guns Guns store). During the “Recruiting Hancock” Quest.
Companion Perk: Isodoped
Perk Effect: Get criticals 20% faster at 250 rads and up
Companion Bio: Check out Scollay Square inside Goodneighbor for a chance to meet John Hancock. After you finished the Recruiting Hancock quest he will become your companion.

• [08:41] — Companion Location #11: ROBERT MACCREADY can be found in the town of Goodneighbor, at The Third Rail. Not Quest related.
Companion Perk: Killshot
Perk Effect: +20% chance of headshots in VATS
Companion Bio: Another seemingly dodgy contact within Goodneighbor. If you pay him 250 bottle caps we will offer his services to you as a companion.

• [09:53] — Companion Location #12: STRONG can be found in Diamond City, at Trinity Tower. Free him from his cell during the “Curtain Call” Quest and then complete the Quest.
Companion Perk: Berserk
Perk Effect: +20% melee weapon damage when health falls under 25%
Armor Upgrade: His strong armor can be found at Trinity Tower (near Diamond City) where you first gain Strong as a companion. Once you have it, equip the Super Mutant Cowl Armor from the companion’s apparel section*.
Companion Bio: During the quest Curtain Call there’s a large tower, Trinity Tower, at the top you’ll find Strong locked inside a cell. Release him from his cell and complete the quest to recruit him as a companion. Protip, don’t shoot Strong or he’ll always shoot you when you see him.

• [12:19] — Companion Location #13: X6-88 can be found in The Institute, which is in the Cambridge area next to the C.I.T. Ruins. During the “Synth Retention” Quest.
Companion Perk: Shield Harmonics
Perk Effect: +20% damage resistance vs. energy
Companion Bio: Continue through the main story until you reach the Institute location. You can’t miss him so just work your way through the quest.

There you go! All Companions in Fallout 4 are yours! 🙂

At the beginning of the game the Vault-Tec Rep that suspiciously sells you last-minute access to the Vault and puts you on the access list is moments later denied access himself at the gate. This is him 200 years later as a ghoul. He can not be your companion but he can be a follower at a base of your choosing. Your Charisma only has to be 1, but in the below video guide it’s at 3 or 4 with a food buff.

The Vault-Tec Rep is located at Goodneighbor. He is more of a follower type character because he can not go out and fight with you. He will go to a base you send him to, but it doesn’t seem like you can get him to fight.

To unlock Anne Hargraves as a follower, complete the “Curtain Calls” Quest at Trinity tower outside of Diamond City, and then save Rex from the Super Mutants at the WRVR Broadcast Station first (this is where she works), before returning to your Sanctuary to find her.

Anne Hargraves is an optional follower that you can send to your town. She can’t seem to fight for you, but she’s got seamstress skills.

Huge thanks to Gametastik & GamerForEternity for the guide videos and tips.

Please comment if you have any additional Fallout 4 Companions location tips of your own, we’ll give you credit for it. – Thanks for visiting!