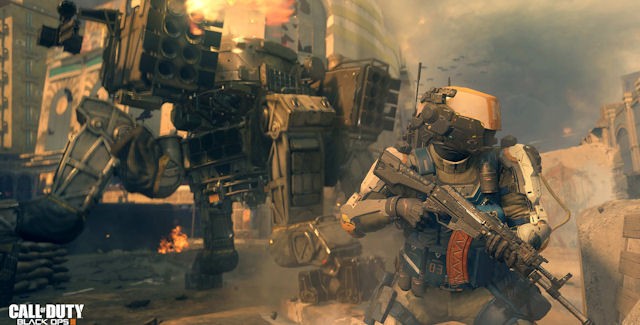 The Call of Duty: Black Ops 3 trophies guide lists every trophy for this PS3 & PS4 first-person shooter game and tells you how to get and unlock them.

1. Platinum (Platinum) — Awarded when all other trophies have been unlocked.

5. Belly of the Beast (Silver) — Complete Provocation on Hardened, Veteran, or Realistic.

6. Into the Abyss (Silver) — Complete Hypocenter on Hardened, Veteran, or Realistic.

8. Friends and Foes (Silver) — Complete Rise and Fall on Hardened, Veteran, or Realistic.

Requirements: From the Main Menu select the “Campaign” section and choose to “Go To Safehouse”. – Then you must buy the Blidning Swarm cyber core upgrade in the Safehouse, which is part of the ‘Chaos’ skill tree.

Now unleash the swarm near a big group of human enemies and quickly kill them while they are stunned by the swarm. A good place early in the game is in mission 4. After killing the enemies in the first big area you will come by a mobile armory and civilians/prisoners come running down some stairs. There is a large group of enemies standing close together. Unleash the swarm and pick them off one by one when they are stunned.
Note: Kill yourself to restart the checkpoint if the trophy doesn’t unlock.

Requirements: From the Main Menu select the “Campaign” section and choose to “Go To Safehouse”. – Then upgrade the “Overwhelming Force” Ability in the Safehouse, which is part of the ‘Martial’ skill tree.

Tip: The fully upgraded version is called “Unstoppable Force”. It lets you fly for a couple of meters and destroy everything in your path. You must line up 5 enemies and then activate the skill.

Location: A great spot is in Mission 4: Provocation. A few minutes after the mission starts you come a little village where some slaves are being held. There’s a turret in the middle. After killing the first wave of enemies, six robots will approach the area. They will stand still after a while to defend the path to the next area. Approach them and use the Unstoppable Force ability on the group of robots. It should instantly destroy all of them. It’s recommended to do this on Recruit difficulty. If it didn’t work you can kill yourself to restart the checkpoint.

15. Sting like a Talon (Bronze) — In Campaign, kill 20 enemies while flying the same Talon.

Right at the start of the mission your teammate Diaz will tell you to take control of a drone. You can pick from little robots and flying drones. Pick the flying drone, which is called the titular Talon, and kill all the enemies in the next room.

Location: Can be done at the earliest in Mission 1: Black Ops.

At the end of this mission you will be driving a truck and can use its turret against enemies. At one point your truck will stop and many robots come to fight you and try to climb the truck. They die in 1 shot from the turret. Quickly shoot the large group of robots and you should get the trophy. If it doesn’t unlock you can back out to the main menu and then resume from last checkpoint.

17. Curator (Silver) — Discover all of the collectibles in the Campaign.

Tip: To find all 56 collectibles, check out our “Call of Duty: Black Ops 3 Collectibles Locations Guide“.

Location: A few minutes into Mission 4: Provocation you’ll come to an area with lots of containers and you get ambushed by lots of robots. There is a mobile armory here.

A) The “Tried and True” Decoration is covered in the “For real this time” trophy section below.

B) The “Good Listener” Decoration is obtained by collecting all Audio Recordings in Mission 5: Hypocenter. – You must interact with some computer screens to listen to the recordings. Luckily, they are all in the same room. This is after descending into the core of the facility, when you get ambushed by a large group of robots.

20. Doing Camo Right (Bronze) — In Campaign, unlock all camos for any weapon.

Requirements: From the Main Menu select the “Campaign” section and choose to “Go To Safehouse”. – Then buy the “Remote Hijack” skill in the Safehouse, which is part of the Control Core skill tree.

Location: Can be done at the end of Mission 7: Rise & Fall, where you will have to fight some large robots – the so called “ASP”. The first one you must destroy cannot be hacked. After that a smaller ASP is dropped off by a helicopter. Use the Remote Hijack ability on it. It takes a few seconds to hack it. Once you are in control of the machine the trophy will unlock.

22. Walking Encyclopedia (Bronze) — Discover all of the collectibles in any Mission.

Location: Can be done at the start of Mission 9: Sand Castle, when you will be flying a VTOL and must destroy the defenses of an enemy base.

Fly 100+ meters away from the base and start shooting the enemies from afar. This works best with the VTOL’s Machine Gun. You can also zoom in to see enemies more easily. Odds are you will get this trophy here without even trying.

24. Can’t Hide (Bronze) — In Campaign, kill an enemy through a wall or obstruction.

Requirements: From the Main Menu select the “Campaign” section and choose to “Go To Safehouse”. – Then first buy the fully upgraded “Takedown” skill in the Safehouse, which is part of the Martial skill tree. The fully upgraded version is called “Rapid Strike”. It allows you to do a x3 melee combo. Make sure you equip it in your loadout before starting a mission.

Location: Now look for 3 enemies that are standing close together. The first 3 enemies in Mission 7: Vengeance are perfect for this. Press the right stick to attack one after the other. You should see a button prompt when close to an enemy. When done correctly you will see a little animation of you rushing from enemy to enemy and instant-killing them.

27. For real this time (Bronze) — Earn a Gold Rating in the training simulator.

Tips: The training simulator can be accessed in the Safehouse of campaign mode, after beating mission 2. It’s a combat simulation consisting of 16 rounds. If you beat all 16 waves you are pretty much guaranteed a gold rating. Do it as quickly as possible and you’ll get even more points.
27,500 points are required for gold.

Note: Set the game to Recruit difficulty to make it easier.

Bonus: If you want the “Tried and True” decoration you must get at least 35,000 points. You must be very quick to pull this off. The decoration is required for the “Personal Decorator” trophy.

Right at the start of the mission your teammate Diaz will tell you to take control of a drone. You can pick from little robots and flying drones. Pick the little robots, which is called the titular Combat Robot, and kill all the enemies in the next room.

Location: Can be done at the earliest in Mission 2: New World, when you chase down the suspect.

You must cook a frag grenade and throw it at the talons just a moment before it explodes. Talons almost always fly in swarms of 3 or more. It also counts when you throw the grenade on the ground and the talons are flying over it. The trophy description is a bit misleading, the grenade doesn’t have to explode mid-air.

31. Lock, Stock, And Then Some (Bronze) — In Campaign, unlock all attachments for any weapon.

32. In Their Sleep (Bronze) — In Campaign, kill 5 stunned enemies in under 3 seconds.

Location: Can be done in Mission 3: In Darkness.

Requirements: Set the game to Recruit difficulty level and make sure you have some Flashbangs in your loadout.

The first group of enemies in this mission is perfect for this. Now wait until 5+ enemies are close together (there are more than enough enemies in this section) and throw the Flashbang at them. Kill them as quickly as you can. Use a machine gun or semi-automatic shotgun from up close. This only works on human enemies, not robots.

33. The Beginning of the End (Silver) — In Shadows of Evil, complete all Rituals.

34. From the Shadows (Bronze) — In Shadows of Evil, spot the Shadowman fives times in one game.

35. Not out of Gobblegum! (Bronze) — In Shadows of Evil, purchase and chew every type of GobbleGum in your Pack.

37. Strike! (Bronze) — In Shadows of Evil, use the rocket shield attack to kill at least 10 zombies in one burst.

38. Beat CoP (Bronze) — In Shadows of Evil, summon the Civil Protector in every district in a single game.

39. The Spider and the Fly (Bronze) — In Shadows of Evil, kill 10 zombies ensnared by a Widow’s Wine grenade.

40. Margwa Party (Bronze) — In Shadows of Evil, kill 2 Margwas in a single round.

41. Parasite-Seeing (Bronze) — In Shadows of Evil, kill 5 Parasites while riding on the train.

42. Welcome to the Club (Bronze) — Reach Sergeant (Level 10) in Multiplayer while playing online.

44. Tactical Specialist (Bronze) — Get 5 Medals based on a Specialist Ability in a single game.

45. Deadly Specialist (Bronze) — Get a Specialist-based medal that requires 3 or more rapid kills while using any Specialist Weapon.

46. No One Will Believe You (Silver) — Complete the Campaign on Realistic.

47. Another Side of the Story (Bronze) — Complete the Campaign on any difficulty.

48. Silverback In Black (Bronze) — Hack the Data Vault and brace yourself for Cyber’s Avengening in Dead Ops Arcade 2.

Location: After beating Mission 2: New World in the campaign you can enter the Safehouse at any time from the Main Menu’s Campaign section. In the Safehouse is a data terminal (looks like a big computer screen). Access the terminal and press the hidden button in the top left corner. Pressing the button is going to start up Dead Ops Arcade 2. – The trophy pops automatically after watching the intro sequence.

Special thanks to Activision, Maka & Powerpyx for the list, tips & guide videos.

Please comment if you have any Call of Duty: Black Ops 3 trophy unlock tips of your own. Kudos will be given. – Thanks for visiting!