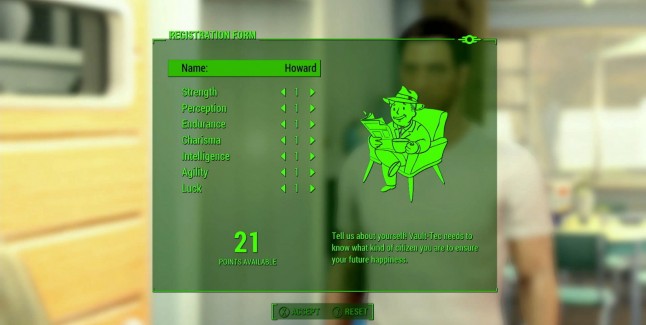 Check out the early leak of the full Fallout 4 perks list! 😀 There’s a total of 70 perks with 275 ranks, spread over 7 SPECIAL stats (10 perks in each category), and you can choose 1 perk every level as you progress in this action-RPG game.

Developer Bethesda is none too happy with the leak forcing the original poster to retract the leak, but this being the internet everyone (including us) already copied and spread it. With Pete Hines, the vice president of Bethesda Softworks, likening it to “watching someone else open your Christmas presents in November.” Must feel awful to have so many to have so many fans excited for any early info on Fallout 4! 😉 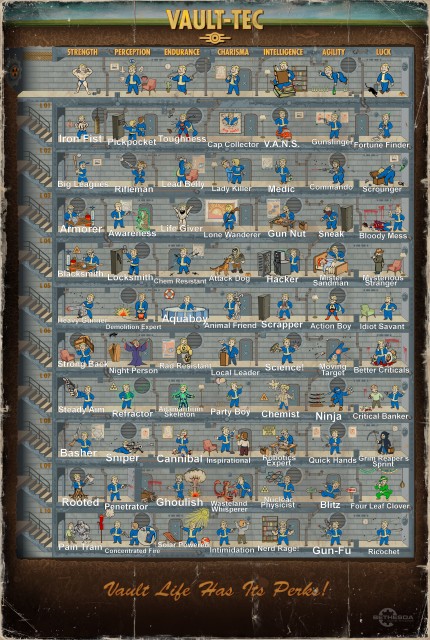 The perks list below is also shown in this complete Fallout 4 perks chart.
.
This perks chart was also available as a physical Vault-Tec Perk Poster in the sold-out Fallout 4 Pip-Boy Edition.
.
The original poster allows you to “Keep track of your perks with your very own physical Vault-Tec perk poster, fully-colorized retro fun for the quintessential Wasteland survivor.” But in the digital chart — that you can click on the left-side of this paragraph to zoom in on — I’ve added the names of the newly revealed perks!

STRENGTH is a measure of your raw physical power. It affects how much you can carry, and the damage of all melee attacks.

PERCEPTION is your environmental awareness and “sixth sense,” and affects weapon accuracy in V.A.T.S.

ENDURANCE is a measure of your overall physical fitness. It affects your total Health and the Action Point drain from sprinting.

CHARISMA is your ability to charm and convince others. It affects your success to persuade in dialogue and prices when you barter.

INTELLIGENCE is a measure of your overall mental acuity, and affects the number of Experience Points earned.

AGILITY is a measure of your overall finesse and reflexes. It affects the number of Action Points in V.A.T.S and your ability to sneak.

LUCK is a measure of your general good fortune, and affects the recharge rate of Critical Hits.

Spending your 21 perk points on your character at the start of the game is shown at 8 minutes into this official video:

What are your favorite Fallout 4 perks?