How To Unlock All WWE 2K16 Characters 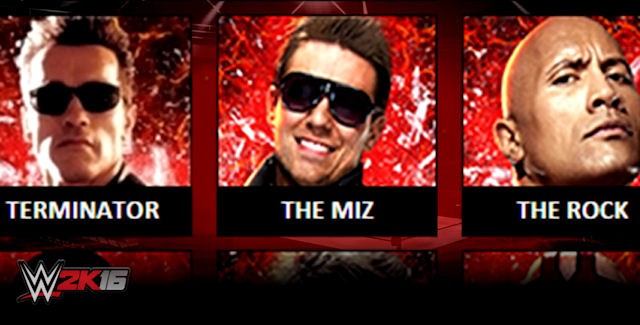 This official video shows gameplay for most of the WWE 2K16 characters in action.

Below we’ve listed the playable characters. Take the following steps to unlock each of them, so that all unlockable characters in the game will be available to you.

How To Unlock All WWE 2K16 Characters

Below we’ve listed the 40 secret characters in alphabetical order. Take the following steps to unlock each one.

How to unlock additional characters?: As you can tell, when you start the game not all characters are available to choose from in the 120+ roster. You can unlock more by taking certain steps, as explained below.

• Unlock Method #1: You must achieve all conditions set in the 2K Showcase mode starring Stone Cold Steve Austin as well as the MyCareer Mode.

• Unlock Method #2: Buy the $25 Season Pass or spend the $2 on the separate DLC pack to obtain the “Accelerator” DLC (which is part of the Season Pass, and gives you instant access to all unlockable characters / content available in the game from the moment you start playing.

How To Activate All “Accelerator” DLC Unlockables: Simply buying & downloading the “Accelerator” DLC does not unlock all characters automatically. You still need to do one more thing to unlock everything…
– Step #1: After downloading the Accelerator DLC (never pay for it more than once; note that it’s already included for free in the Season Pass) exit out of the WWE 2K16 Shop — back into the game’s Main Menu — then exit out of there to the Title Screen.
– Step #2: Once you’re on the Title Screen let the game load again until you have to press the Start button and select your harddrive device to go back into the Main Menu.
– Step #3: From the Main Menu, scroll down to the “Unlockables” Options menu and select “Unlock Everything” with the X button on Xbox / Square button on PlayStation to “unlock all WWE 2K16 Superstars, Divas, alternate attires, arenas, and championships in the game.” Now you can go back to the Main Menu and select “Play” to go into a game mode and play as all characters from the get-go.

Aside from the extra 1 Pre-Order Bonus DLC character & 36 Season Pass DLC characters listed at the bottom of this page, there are also 18 extra secret characters hidden in the main game’s roster. They are…

How To Get The Terminator (Arnold Schwarzenegger)

At launch it is only available for those who pre-order the game at participating retailers for the PlayStation 4 and PlayStation 3 computer entertainment systems, as well as Xbox One and Xbox 360.

Schwarzenegger, a longtime WWE fan and WWE Hall of Famer, will expand his relationship with WWE through WWE 2K16 with two playable characters – T-800 from The Terminator and Terminator 2: Judgment Day films.

How To Download: First enter and activate your “Arnold Pack” DLC code in your console’s store. Next, for example from the PSN menu, scroll over to WWE 2K16, press down to go to related items and see the “My Add-ons” tab to click on. Finally, next to the “Arnold Pack” there should be an arrow pointing down, click on that to download it. After that make sure it’s downloaded and installed.

Troubleshooting Tip: If you’re on a PlayStation platform sometimes the Terminator doesn’t show up in the Downloadable characters tab of your roster. If that’s the case for you, the solution to make him appear is to: A) Make sure he’s downloaded and installed on your console; B) You may have to renew your licences on your PlayStation’s download settings.

How To Get 29 More Characters (Season Pass)

These are the DLC characters you get with the DLC Packs in the WWE 2K16 Season Pass:

This trailer shows everything you get in the WWE 2K16 Season Pass:

[Work-In-Progress: Please share any improvements you may have to the unlock requirements]

Credits: 2K Sports. Feel free to comment if you have any other tips to unlock characters.

Who are your favorite WWE 2K16 characters?