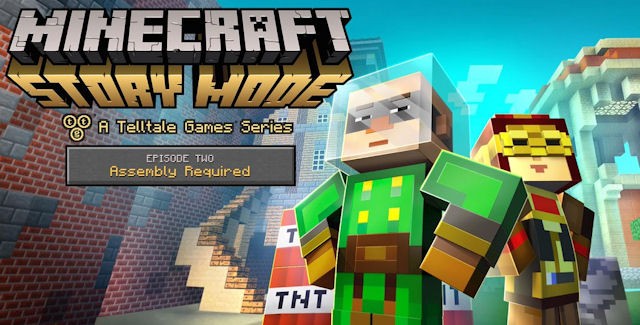 The Minecraft: Story Mode Episode 2 walkthrough for “Episode 2: Assembly Required” will guide you through the beginning to ending moments of gameplay with strategy tips for this graphic adventure game on the PC, Mac, Xbox 360, Xbox One, PS3, PS4, PS Vita, Wii U & Mobile (iOS and Android-based devices).

The full Minecraft: Story Mode Episode 2 walkthrough is livestreamed by me right now!

Minecraft: Story Mode Season One is a five part episodic game series set in the world of Mojang’s popular Minecraft game. Although you won’t be playing as Minecraft’s Steve.

In Minecraft: Story Mode, playing as either a male or female hero named ‘Jesse,’ you’ll embark on a perilous adventure across the Overworld, through the Nether, to the End, and beyond. You and your friends revere the legendary Assembly Required: Warrior, Redstone Engineer, Griefer, and Architect; slayers of the Ender Dragon. While at EnderCon in hopes of meeting Gabriel the Warrior, Jesse’s friends discover that something is wrong… something dreadful. Terror is unleashed, and you must set out on a quest to find The Order of the Stone if you are to save your world from oblivion.

Synopsis: In the second chapter of your story, time is running out for our intrepid heroes. The Wither Storm looms ever closer, consuming everything in its wake. Depending on their decisions, Jesse and friends are off to explore either kingdoms of chaos or wondrous Redstone marvels in search of Magnus or Ellegaard, the remaining known members of The Order of the Stone. Can these legendary figures help our heroes stop the impending threat?

Your path in ‘Assembly Required’ will differ greatly depending on your choices made in ‘The Order of the Stone’, so more than one playthrough is definitely recommended after your season concludes! Did you choose to save Gabriel or Petra amid the Wither Storm? Did you choose to seek the help of Magnus the Griefer or Ellegaard the Redstone Engineer? This is one of Telltale’s most divergent episodes yet depending on the paths you’ve chosen – and many players will have completely different experiences depending on where they’ve decided to go!

The Episode 2 chapter names are:

Alternative playthrough for the full Episode 2:

Next Episode: Please join our upcoming “Minecraft: Story Mode Episode 3 Release Date” discussion about what will happen in Episode 3: The Last Place You Look.

Thanks to Telltale Games, Doug, Alzu Gaming & AFGuidesHD for the walkthrough videos.