Tales from the Borderlands Episode 5 Walkthrough 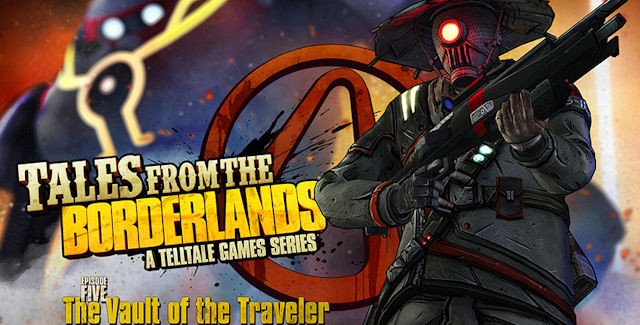 Our Tales from the Borderlands Episode 5 walkthrough will guide you through the beginning to ending moments of “Episode 5: The Vault of the Traveler” gameplay with strategy tips for this episodic graphic adventure game on the PC, Mac, PS3, PS4, Xbox 360, Xbox One & Mobile devices.

The full Tales from the Borderlands Episode 5 walkthrough is being livestreamed by Doug right now!

Tales from the Borderlands Episode 5 Walkthrough

Welcome to the Tales from the Borderlands Episode 5: The Vault of the Traveler walkthrough!

Doug will be your voice-over commentator showing you around the game’s areas. The full 2-hours-long playthrough can be seen at the top of this page.

Synopsis: In the final episode of the season, all hell breaks loose. Jack is now in control of Helios’ systems, and he’s ready to reclaim his rightful place as king of Hyperion (with or without you). It’s a mad dash to get out of the chaotic space station alive, as everyone scrambles to grab the final Gortys piece and high tail it back to Pandora. Can you guide our ragtag team through perilous corporate dangers in hopes of getting some sweet alien riches? Loyalties will be tested, secrets will be revealed, and explosions will be in large supply in this climactic chapter of Tales From The Borderlands!

Here you’ll find all Alternative Choices in Tales from the Borderlands – Episode 5 “The Vault of the Traveler”.

This video shows all the above listed choices in chronological order:

Sadly no Season 2 Preview gets shown after the ending.

Next Episode: Future episodes are unconfirmed as of yet, but with an open ending like that they are a sure thing! – Please join our “Tales from the Borderlands Season 2 Release Date” discussion about what will happen next.

Thanks to Telltale Games, Doug, AFguides & GamerZombie for the walkthrough videos.