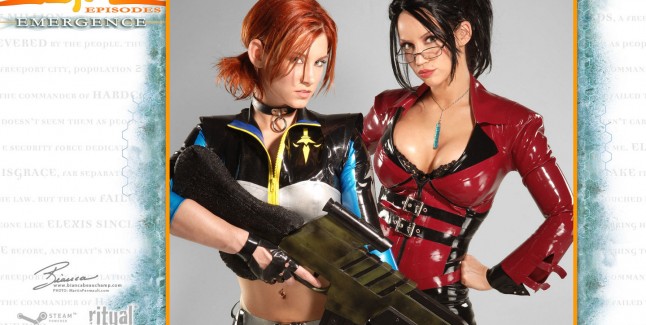 Elexis Sinclaire Cosplay from Sin Episodes: Emergence by Bianca Beauchamp! This buxom latex model was the official cosplay actress for Elexis that was handpicked by the game’s developer Ritual Entertainment, and made appearances at official events like E3 2006.

Here is the Elexis Sinclaire cosplay image gallery from Sin Episodes.
Click on the image thumbnails to see the full-size cosplay photos: 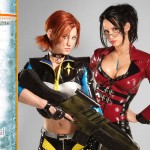 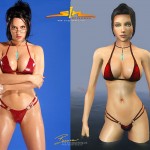 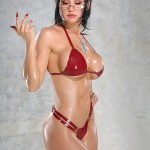 When a latex lair drives you bonkers! 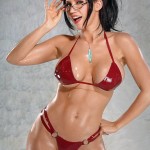 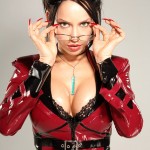 Smokin! I love glasses on a woman! Elexis is clothed & dangerous! 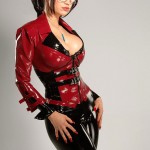 Is this one buxom babe or what? 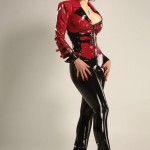 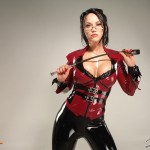 Better play nice or you get a whippin’! 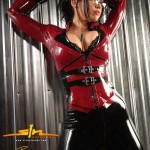 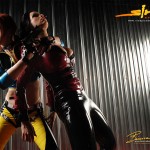 Elexis vs Jessica. We are all winners. 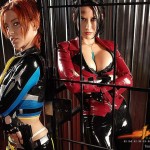 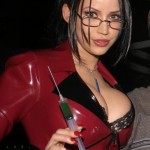 Ready for your checkup, dear? 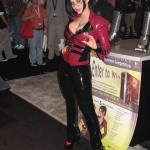 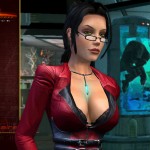 YOUNG WOMANHOOD, UNIVERSITY, AND MODELING…
“I finished high school at the tender age of 16. In my late teens I would meet Martin Perreault, the man of my life. I first met him in a theater-style restaurant where the waiters were dressed up and played their characters throughout the night. Martin played a crazed undead spy. When he saw me he fell under my charm and flirted with me all evening, through his character of course. At the end of the evening he left me a note and his phone number but I never called him. I decided to write to him instead and brought my letter to the restaurant. We wrote to each other for about three months before meeting again at the same restaurant. This time, he was playing a charming vampire. A year later, at the age of 18, I moved in with him.

Not too long after that, I started posing for Martin. He wasn’t really considered a photographer back then. He wanted to be a filmmaker. He did study photography back in high school and also at university. He saw me as his muse but I still had problems seeing myself in pictures: I would rip them up. It took a lot of time and patience to convince me and I finally started to enjoy modeling. It was also at around the same time that we both discovered latex. And from that point on, most of our shoots were done wearing it. I’ve been posing for the public now since 1998.

While modeling, I started my studies in French Literature at Cegep and then went on to get my certificate in French grammar at university. I then started my teaching degree specialized in French Language teaching for high school students. I knew that one day I would have to stop modeling and dedicate myself to teaching but since I was only a student I didn’t object to doing both at once. I also worked for five years in a McDonald’s. Yup! I didn’t like working there but my schedule was flexible. I was often tired but I knew that when my studies would end I would be able to rest a bit.

My first Teaching Internship was at my own high school! Imagine the teachers’ faces when they saw me! I have to say that I had been rude to a few of them… And to say that I now wanted to be one of them! During my second internship, in my second year, one of the teachers “accidentally” found my website; Bianca’s Latex Lair and advised my internship supervisor. I met with my supervisor and he pressured me into closing my site (even though there wasn’t any nudity at the time) until the end of my internship. Once my internship completed, I reopened it. My supervisor then threatened to fail me and brought it up with his superiors. I was summoned to a meeting and had to explain my position. Luckily I had help from Martin and from another university teacher who despised injustices. It’s with this help that I managed to get a passing grade for my internship. But, after this incident, the university submitted its conditions: closing down my site during each one of my internships. I had two more internships to do spanning over many months. So I started my 3rd year wondering if I wanted to stop modeling. Being up against a wall made me realize that my passion for modeling was also quite strong. After lots of self reflection and self questioning I chose to pursue my modeling career and left university. It was one of the most difficult choices that I had to do and I don’t regret it.

Of course, for some readers reading all this today, it may seem like not such a big deal. But one has to go back in the late 90’s to really understand the dilemma that I was facing. The mere word “fetish” thrown in a conversation had people frown at me. I lost many friends over my decision to model latex. Back then, internet was new, people knew little to nothing about latex fashion, let alone the erotica possibilities of latex photoshoots without it being vulgar or sexually graphical. I was the first online to do it, publically, as a professional model who is INTO the latex fetish side of it too. And that threw off a few people. It was hard for people to understand. But the fans showed me a different light. All of a sudden, I started getting tons of emails from fans who were discovering their latex fetish. For the first time, they could gather on a website, and talk about it openly, with someone who not only didn’t judge them, but was actually into it openly. For many many people back then who had a sense of attraction towards the erotic art of latex fetish, may it be as a voyeur, or as a wearer, they would keep it inside themselves and never have the chance to talk about it. And this is how the latexlair started, as a sense of community, and a place for me to express myself in photos.

Soon after making my decision to make a career out of my latex photography, I set some goals and one of them was to pose for Playboy. Being in this magazine would represent a personal and professional accomplishment, which I did a few years later…” – Written by Bianca Beauchamp, read the rest of her official bio at her website.

SIN Episodes was to be a 9-part Episodic first-person shooter series, based on the 1998 PC FPS “SIN”. However, the grand plans of developer Ritual Entertainment were not to be, as the planned “SIN: Episodes” series ended at the first installment, “SIN Episodes: Emergence”, which was released on Steam for PC in 2006.

SIN Episodes: Emergence was ahead of it’s time, released “way back” in 2006, before Episodic gaming really took off, and before Indie developers had the power of AAA developers and the many independent funding options they enjoy today. SIN Episodes would have featured “community-driven outcomes” where the storyline would change depending on how key features were received and what players enjoyed based on user-statistics. SIN Episodes: Emergence maintains the distinction of being the first PC videogame by a major developer aimed to be produced episodically from the start; and delivered over the Internet without the intervention of a publisher. Way before that became an actual reality in the modern age.

Sin Episodes: Emergence Synopsis
You are John Blade, commander of HardCorps, an elite security force dedicated to protecting the people of Freeport City. Four years have passed since your first battle with Elexis Sinclaire, a beautiful, brilliant, and ruthless scientist who is out to remake humanity according to her own twisted vision. The law has failed to bring Elexis and her multi-billion dollar empire, SiNTEK, to justice, so Blade is determined to take matters into his own hands. Joining Blade on his mission are JC – a hacker with a secret to keep – and Jessica Cannon, a fiery rookie who can find her way into any secure facility.

Enter the living, breathing world of Freeport City, a futuristic collision of New York, San Francisco and Tokyo. As Freeport continues to suffer from mutant attacks, you must now bring down Sinclaire before she can set her deadly plan in motion and alter the shape of humanity forever.

Key Sin Episodes: Emergence Features:
* Intense Combat: Face off against ruthless enemies, like jetpack soldiers and mutants that evolve as you fight them. Witness enemies that adapt to your actions and truly work as a team, as they cover each other and help fallen comrades to get back on their feet. Outsmart your opponents by using your surroundings to your advantage as you set up traps using lethal elements of the environment. Location-based damage rewards accuracy while melee combat moves enable you to get up-close and personal.

* Unprecedented Interactivity: Blast your way through highly interactive environments powered by an enhanced version of the Source engine. Characters dynamically react to what you’re looking at and the environment. Target and shoot off specific vehicle parts and literally blow cars to pieces. Experience the next level of vehicle combat with a flexible positioning system enabling you to move around the interior with an unprecedented degree of freedom, allowing you to pick the ideal position to attack that enemy position up ahead.

* Personal Challenge System: Driven by one of the most elaborate statistics systems ever created, SiN Episodes will constantly adapt to your playing style and offers a challenge that is custom-tailored to your skill level.

* Episodic Delivery: Buy as little or as much of the game as you want, with each installment offering 3 – 6 hours of action-packed gameplay. But tread lightly, as the choices you make may influence future episodes in unforeseen ways.