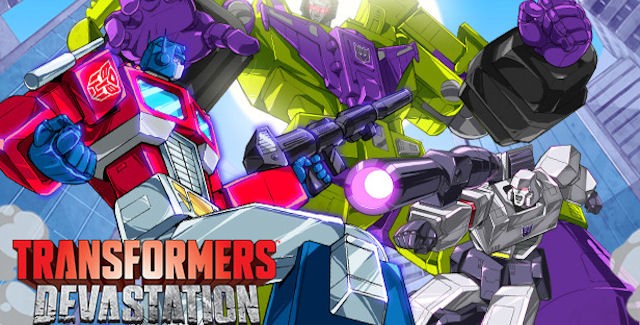 Our Transformers Devastation walkthrough will guide you through the beginning to ending moments of gameplay with strategy tips for this hack ‘n slash action game on the PS3, PS4, Xbox 360, Xbox One & PC.

Let’s start the Transformers Devastation walkthrough with an introduction video!

Please note that viewers must be at least 12-13 to watch, in Europe & America respectively, so no harm comes to those with innocent eyes. This game includes Fantasy Violence.

The Transformers are back, and this time they’re in the hands of acclaimed developer Platinum Games, who has married their over-the-top, stylish action with a major dose of nostalgia to create a Transformers game like none other. The AUTOBOTS face off against DECEPTICONS when MEGATRON discovers a way to harness the enormous power of Plasma Energy to Cyberform Earth.

Welcome to the Transformers Devastation walkthrough!

XCV will be your progamer guide showing you around the game’s levels.

Chapter Description: Something strange is tearing apart a human city. The Autobots roll out to investigate.

Mission Objectives:
– Advance into the City! Uncover the cause of disturbance in the city.
– Defeat Megatron! Find Megatron and learn what his plans are.
– Head to the Steel Tower! Follow Megatron to the Steel Tower.
– Follow Megatron! Chase after Megatron and attack until he relents.
– Defeat Megatron! Give Megatron a taste of true Autobot strength.
– Find the Sub-Generators! Find and shut down the three sub-generators.
– Defeat Devastator! Bust up Devastator like he stole somethin’.

Chapter Description: The Autobots must go into the Proudstar to discover what Megatron is up to.

Chapter Description: The Autobots must find a way through a Decepticon stronghold to reach the Plasma Core.

Mission Objectives:
– Find a Decepticon! Search for a Decepticon who knows where the core is.
– Catch Tundercracker! Get Thundercracker to tell you the location of the core.
– Head to the Island! Make your way to the Plasma Core on the island.
– Carry Energon! Use energon cubes to break through the Decepticon defenses.
– Defeat Starscream! Teach Starscream that he’s no match for the Autobots.
– Defeat Blitzwing! Defeat Blitzwing to retrieve the core.

Chapter Description: The Plasma Core is out in the open, and the Autobots must reach it before the Decepticons!

Chapter Description: Megatron’s escaped to Cybertron with the Plasma Core. The Autobots follow.

Mission Objectives:
– Defeat Starscream! Unleash some Autobot justice on Starscream inside the Space Bridge.
– Defeat Blitzwing! Knock Blitzwing aside and hurry to Megatron and the core.
– Head within Cybertron! Proceed deeper into Cybertron to recover the core.
– Defeat Shockwave! Tear through Shockwave — Don’t let Megatron escape!