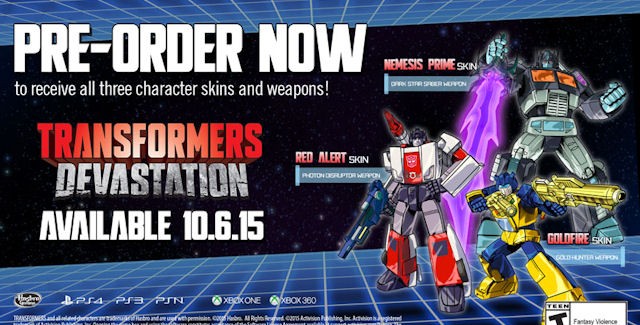 Here we will show you how to unlock all Transformers Devastation codes with a cheats list that’s valid for the PC, PS4, PS3, Xbox 360 & Xbox One versions.

You can see a picture of all three pre-order bonus skins/weapons at the top of this page.

The DLC Unlockables Include:
• Nemesis Prime Skin with Dark Star Saber Weapon. – The Dark Star Saber is a fiercely intimidating blade that radiates waves of dark energy with every swing.
• Red Alert SKin with Photon Disruptor Weapon. – The Photon Disruptor is an incredibly powerful, shotgun-style weapon that has a short range but deals huge amounts of area damage.
• Goldfire Skin with Gold Hunter Weapon. – The twin Golden Hunter is a pair of blaster pistols that causes enemies to drop credits when attacked.

It’s unconfirmed if you can get these unlockables as paid DLC later on, but it’s likely Activision will make it available after launch.

Here you get gameplay tips from the game’s Japanese creators.

In this video the game’s producer Atsushi Kurooka brings a better look at the gameplay in Transformers Devastation.

Watch the behind the scenes making of Transformers Devastation with acclaimed developer Platinum Games, who have combined their over-the-top brawler action with comic book inspired art to create a TRANSFORMERS game like none other.

Do you know of any Transformers Devastation cheats or unlockables?
Let us know in the comments, you’ll get credit for finding out. – Thanks for visiting!