Nintendo’s NX system is rumored to feature rotational shoulder buttons & rumble for the Wii U-like tablet touchscreen, according to new rumors based off some Nintendo patents that have been unearthed.

As always, this is rumor & speculation and should be taken with a big grain of salt. These patents are just that; often patents are made and Nintendo (and other companies) don’t actually use them or bring them to reality. Remember the Wii Bicycle Accessory & Wii Teddy Bear patents? Case in point.

This patent features an all-new way to control videogames: Rotational Shoulder Buttons! In the diagram, the GamePad/Tablet only features two face buttons, everything is else done via “rotational shoulder buttons” which is exactly what it sounds like.

Here is the official patent description:

According to the above configuration example, it is possible to provide a new operation apparatus which can effectively utilize an index finger. 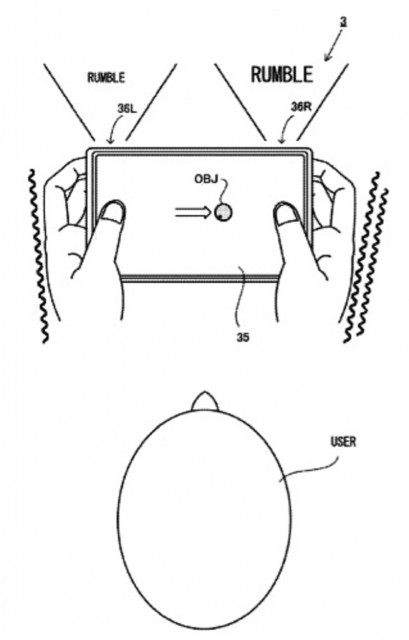 This rumor would make touchscreens more tactile by having a rumble or haptic feedback feature.

Here is the official patent description:

I really hate commenting on rumors & speculation regarding new systems.

To me it really spoils the surprise. Why are people so intent on spoiling the surprise these days? Whatever happened to just waiting to see what happens?

But I digress. The Rotational Shoulder Buttons is a really cool idea.

It will be really interesting to see if Nintendo once again goes with a Tablet/GamePad design with the NX, or if they do something entirely different. 2016 can’t come soon enough!

Are you excited about these patent ideas for the Nintendo NX?