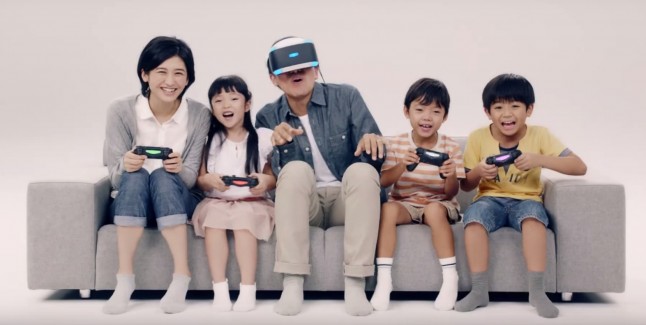 Project Morpheus is officially called “PlayStation VR” now, as Sony has given their Virtual Reality headset a final name. It will arrive as a PlayStation 4 accessory in 2016, although Sony Entertainment’s CEO Andrew House recently told Bloomberg that its price will be that of a new gaming platform ($300-$400?).

Check out the official PlayStation VR announcement trailer, showing a bunch of gameplay clips of upcoming titles & projects. About 10 of which will be launch titles.

Sony Computer Entertainment (SCE) has announced PlayStation VR (PS VR) as the official product name for the virtual reality (VR) system that takes PlayStation 4 (PS4) to the next level of immersion and enables players to feel a sense of presence.

PS VR has generated huge excitement from many developers as well as consumers since its first unveil in March 2014. PS VR is a unique VR system that combines with PS4 and PlayStation Camera to enable players to enjoy a variety of content.

“The name ‘PlayStation VR’ not only directly expresses an entirely new experience from PlayStation that allows players to feel as if they are physically inside the virtual world of a game, but it also reflects our hopes that we want our users to feel a sense of familiarity as they enjoy this amazing experience,” said Masayasu Ito, EVP, Division president of PS Product Business and VP, Software Design Division. “We will continue to refine the hardware from various aspects, while working alongside 3rd party developers and publishers and SCE Worldwide Studios, in order to bring content that deliver exciting experiences only made possible with VR.”

When the player places the VR headset on their head, an impressive virtual world will appear right before the player’s eyes, and as the player’s head rotates, the image of the world will also rotate naturally and intuitively in real-time. By utilizing 3D audio technology uniquely developed by SCE, sounds that players hear will also change in real-time depending on their head orientation within the 360-degree virtual space.

Furthermore, by using PlayStation Move (PS Move) Motion Controller or Wireless Controller (DualShock 4), players can explore virtual environments, and interact with virtual characters as if they are actually present in the world of a game.

3rd party software developers and publishers as well as SCE Worldwide Studios have been leveraging these unique features of PS VR to develop a broad range of software titles.

SCE will continue to further develop PS VR in order to realize amazing VR experience on PS4, and will contribute to the foundation of the VR.

Why does Sony always have to pick such boring names? PSVR, really?

I hope that people continue to call it “Morpheus” or “Project Morpheus”, as that was such a cool name based on one of the Matrix movie trilogy’s main characters (amazing tie-in with the movies’ main plot!). “PlayStation VR” is so boring, I cringe every time I say it.

Things will get really, really interesting once this thing drops, as Sony will be the first console manufacturer to have a VR set; especially since Microsoft’s Hololens isn’t actually an Xbox One peripheral but its own device. And Nintendo isn’t looking to get into the VR business (at least not that we know of).

So that leaves the PSVR in an interesting spot, as Valve’s Vive and Facebook’s Oculus Rift, are not really direct competitors as they both are in either the PC space, or this weird space all of their own.

Although we will certainly see Microsoft pick their game up in 2016 as they do more to directly integrate the Xbox One with the Hololens, their “Augmented Reality” (as opposed to Virtual Reality) headset, in order to further compete in the videogame headset space.

Are you planning on picking up the PlayStation VR next year and what do you think of the final name?