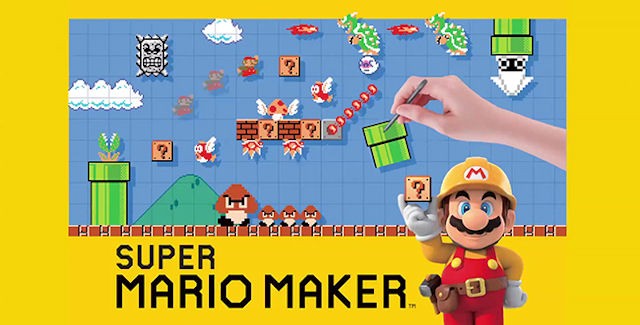 Our Super Mario Maker walkthrough will guide you through the beginning to ending moments of gameplay with strategy tips for this 2D platformer & level editor game on the Wii U.

Please note that viewers must be at least 3 to watch, so no harm comes to those with innocent eyes. This game includes Comic Mischief.

The ultimate evolution of Super Mario Bros. is here!

Mario experience of your dreams has arrived and is bursting with creativity…including yours! Play a near-limitless number of intensely creative Super Mario levels from players around the world. It’s easy enough to create your own levels with the Wii U GamePad controller that it may feel like you’re simply sketching out your ideas on paper, but you can now bring enemies and objects into a playable course in ways you could only dream of before. What was impossible in traditional Mario games is now impossibly fun, so let your imagination run wild!

Create and play the Mario levels of your dreams!

Making levels is easy. Want a Goomba to wear a Piranha Plant on its head, have a Bill Blaster fire coins, or make a giant Bob-omb fly? Then simply drag and drop elements to create pure Mario magic. Switch between 4 Super Mario Bros. game themes—from the 8-bit pixel art of the original to the world of New Super Mario Bros. U—and enjoy the action that each provides. In the mood to play other players’ creations instead? Something surprising? Silly? Intricate? Tough? You’ll find a near-limitless number of levels in the online community. Whether creating or playing, with Mario Maker, the game is your playground.

Welcome to the Super Mario Maker walkthrough where we play through all 60 Nintendo pre-made levels!

Sunny will be your guide showing you through the game’s levels.

The introduction to Super Maker Maker. We learn how to create levels and about the (new) features of the game. Super Mario Maker is currently only available on Wii U.

This is Part 1 of the 10 Mario Challenge mode in Super Mario Maker.

Tip: In order for you to unlock all of the pre-made levels in the game, you’re required to do several completions of this mode.

Note: In these sets of 8 levels you’re asked to try and clear all eight courses without losing 10 lives! Any courses that you clear will be added to Coursebot.

Here are the levels in the completion order they are featured in the video guide:

Here are Part 2’s levels in the completion order they are featured in the video guide:

Here are Part 3’s levels in the completion order they are featured in the video guide:

Here are Part 4’s levels in the completion order they are featured in the video guide:

Here are Part 5’s levels in the completion order they are featured in the video guide: