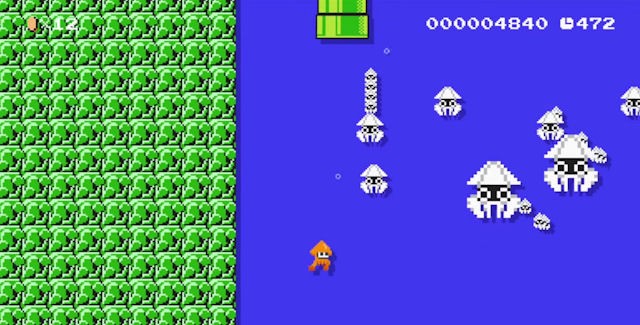 Here we will show you how to unlock all Super Mario Maker codes with a cheats list that’s valid for the Wii U title.

How to make it look like you’re playing the game on an old-school CRT TV with horizontal scanlines:

Immediately after selecting a level… On the level loading screen — where you see a black screen with the level name & Mario in the middle — enter the following cheat code:
At the same time press Down on the Directional Pad (D-Pad), the A button, and the B button.

Note: You can also turn off this “Old-School CRT TV Mode” again by pressing the same 3-button-combination. But you’ll have to be on the level loading screen again to turn off this cheat.

Here’s a video by Andre that shows what it looks like when you activate the Old-School CRT TV Mode:

– Unlock Method #1: While in Editing Mode AKA Course Maker, select a black Munchers plant, but instead of placing it on-screen shake it until 3 flies appear that you have to swat with your stylus.

– Unlock Method #2: While in Editing Mode, do not touch the controls or even the controller itself (or it will detect your motion) for a full 15 minutes. After that 3 flies will appear on screen that you have to swat with your stylus.

– Unlock Method #3: While in Editing Mode, keep moving lots of blocks around a lot of short distances. At some point there’s a random chance 3 flies will appear on screen that you have to swat with your stylus.

The other two methods…

How to get special Squid abilities from Splatoon series amiibo:

Transform into different character costumes with the new Mystery Mushroom item. Expand the roster of possible costumes by tapping compatible amiibo accessories, which scans your amiibo character (or rather the NFC chip in the bottom) and brings its costume into the game through said character’s Mystery Mushroom (this item can be used in the Editing Mode AKA Course Maker).

The Splatoon series of Inkling Squid, Inkling Boy and Inkling Girl 3 amiibo will not only unlock their own character costume, but they also bring with them special Squid abilities. You can:

A) Turn into a Squid on ice to speed up and make very large jumps. On land levels you can switch between the human & squid forms like in Splatoon itself (you can even switch to the Inkling’s firing mode);

B) On underwater levels you automatically turn into an orange, blue or green colored Squid, which allows you to better avoid underwater enemies. Although sadly the other white squids still see you as an enemy.

This official video from Nintendo of Japan shows gameplay of the special Squid abilities:

How to unlock the Nintendo World Championships 2015 levels for play:

Tip: Once they are unlocked, complete All 4 Nintendo World Championships 2015 levels — titled World 17: NWC 2015-1 to 4 — to unlock the Luigi Mushroom item. In Editing Mode AKA Course Maker grab & shake a Super Mushroom to make the Luigi Mushroom appear.

Take a look at a gameplay video that guides you through the 4 NWC 2015 levels once they are unlocked:

Do you know of any Super Mario Maker cheats or unlockables?
Let us know in the comments, you’ll get credit for finding out. – Thanks for visiting!