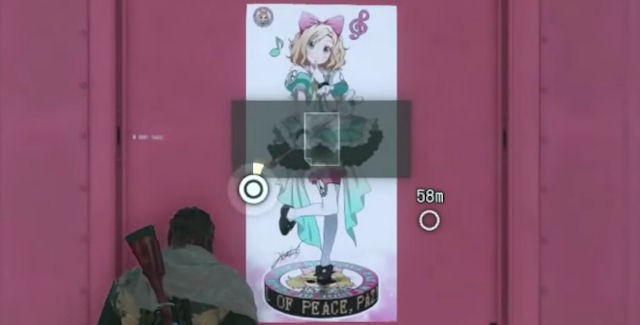 Welcome to the Metal Gear Solid 5: The Phantom Pain Posters locations guide that helps you find the total of 6 Posters locations in the PS4, PS3, Xbox One, Xbox 360 & PC action-adventure stealth game. We’ll also show you how to put & change Posters on the Cardboard Box.

Finding Posters and picking them up will let you change the look and enemy distraction function of Big Boss’s Cardboard Box (notably when you the Glamor Model Poster on the box).

The Timeline for all these in-game Posters locations is listed below.

How to find missing Posters?: Posters can be found on walls. It can be confirmed as being a Poster simply by walking up to it, as the on-screen text will then tell you can press the action button/key to pick up said Poster.

Tip: Once you acquire a poster, it can be used an unlimited number of times! — Despite this good fact, it will still respawn on locations where you found it before, but there is no need to pick up the duplicates. The overview below will show these extra locations in case you missed it before.

Does the game save each Posters you collect?: Yes, the game will automatically save the Posters you just collected if you picked up the Poster, so you don’t have to play to the end of the mission / current task. After picking up each collectible you can safely quit the mission / game. But it’s always recommended you save your game before quitting so you never lose your collectibles progress.

Where to find all Posters in Metal Gear Solid 5: The Phantom Pain? The in-game collectibles locations for the Posters are described in this detailed video guide.

Timeline in minutes for the Posters Locations Guide:

• [00:05] — Poster Location #1: Soviet Soldier Poster can be found outside on a stone-brick building in the Eastern Communications Post (Northern Kabul, Afghanistan) during “Episode 4: C2W”.

• [00:23] — Poster Location #2: Glamor Model Horizontal Poster can be found in the Eastern Communications Post (Northern Kabul, Afghanistan) during “Episode 4: C2W”. It’s inside the mission objective’s building where you have to destroy the communications equipment.

• [00:40] — Poster Location #3: Idol Girl Vertical Poster can be found on the side of a container, left of the shower where your helicopter lands on Mother Base’s Command Platform.

• [01:01] — Poster Location #4: Glamor Model Vertical Poster can be found outside on the north-side of Nova Braga Airport (Angola-Zaire Border Region) inside an open hangar. This airport is the target of “Episode 21: The War Economy”.

• [01:25] — Poster Location #5: PF Soldier Poster can be found in the center of Nova Braga Airport (Angola-Zaire Border Region) inside the biggest hall. This airport is the target of “Episode 21: The War Economy”

• [01:40] — Poster Location #6: Idol Girl Horizontal Poster only appears after you’ve completed the main story mission “Episode 18: Blood Runs Deep”. It can be found on the side of a container, next to stairs at the center of Mother Base’s Command Platform.

There you go! All Posters in Metal Gear Solid 5: The Phantom Pain are yours! 🙂

Huge thanks to GosuNoob & AcceleratedIdeas for the guide videos and tips.

Please comment if you have any additional Metal Gear Solid 5: The Phantom Pain Posters location tips of your own, we’ll give you credit for it. – Thanks for visiting!