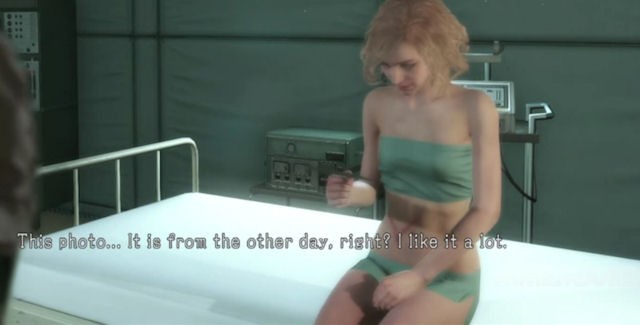 Finding all 11 Paz Memento Photo locations and picking them up will help unlock the following Achievement / Trophy:
* “Reminiscence” (15 Gamerscore / Bronze Trophy) — Obtain all memento photos.
* Bonus: You’ll finally find out more of Paz’s backstory, the truth what really happened during the helicopter explosion 9 years ago, and whether Paz is dead or alive in Metal Gear Solid V: The Phantom Pain.

The Timeline for all these in-game Paz Memento Photos locations is listed below.

How to find missing Paz Memento Photos?: Complete the game’s campaign up to main story mission 42 — titled “Episode 42: (Extreme) Metallic Archaea” — to unlock all 10 of the “Extract the Wandering Mother Base Soldiers” Side Ops #51-60 that you in turn need to complete. This will earn you each of those 10 Side Mission’s Paz Memento Photos.

Protip: The final Memento Photo is on the wall outside Paz’s room on the Medical Platform at Mother Base (3rd deck) after you show here the previous 10. After you show her each one, you will have to return later. Speed up time a full day using a Phantom Cigar (level 2 preferably) and each time you do that you can show her a new photo.

When you first pay Paz a visit there, the following cutscene will play and she’ll ask you “Do you have something to show me, Snake?” Hinting you to go find the other Memento Photos.

Tip: To view the Memento Photos, after collecting them through gameplay, they can be viewed if from the main menu you go to the Mother Base-developed “iDROID” data device, then go to the Database & Documentation folder and select the “Memento Photos” tab.
This will show you a list of the Memento Photos you have obtained.
It’s important to know that the game does not pause while you use the iDROID app!

The Paz Memento Photos are listed in the video in the order per wandering soldier Side Mission.

Timeline in minutes for the Paz Memento Photos Locations Guide:

There you go! All Paz Memento Photos in Metal Gear Solid 5: The Phantom Pain are yours! 🙂

Huge thanks to Brian & Doug for the guide videos and tips.

Please comment if you have any additional Metal Gear Solid 5: The Phantom Pain Paz Memento Photos location tips of your own, we’ll give you credit for it. – Thanks for visiting!