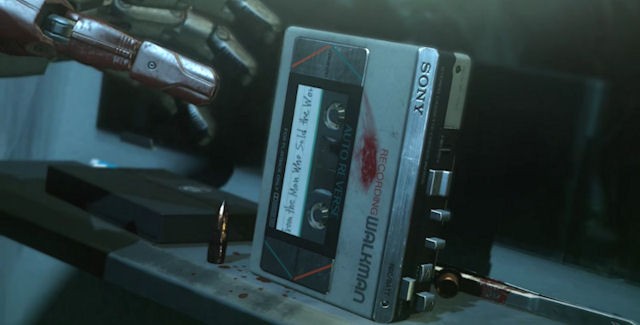 Finding all Cassette Tape locations and picking them up will not help unlock any Achievements or Trophies (like it was in Ground Zeroes). But as a bonus, by listening to all the tapes you get the game’s full backstory, as well as unlocking catchy music to play during your missions.

The Timeline for all these in-game Cassette Tapes locations is listed below.

How to find missing Cassette Tapes?: All of the Cassette Tapes are scattered across the “The Phantom Pain” Main Mission and Side Ops. So you’ll first have to complete the main mission to get access to the side mission.

Tip: To listen to the Cassette Tapes, after picking them up during gameplay, they can be played if from the main menu you go to the Mother Base-developed “iDROID” data device, then go to the “Cassette Tapes” tab and select “Listen To Tapes”.
Additionally, when the cassette tape icon is showing while you are in the Aerial Command Center (your helicopter), press the Triangle button on PlayStation / Y button on Xbox & PC to switch to the Cassette Tapes screen.
It’s important to know that the game does not pause while you use the iDROID!

Alternatively, you can download the free Metal Gear Solid V: The Phantom Pain iDROID app for iOS (or Android), since that allows you to use the game’s unique second-screen elements. The app’s Cassette Tapes Mode allows you to use found cassettes on a to your game console linked iOS, Android or Smart Glass system.

The Cassette Tape Types Are:
– Info Tapes: These contain information pertaining to the story.
– Acquired Tapes: Some tapes enable you to influence your surroundings under specific conditions if you turn on an external speaker from the control panel by pressing on the right trigger (R2 on PlayStation / RT on Xbox & PC).
– Music Tapes: Various music recordings that can also be set as your helicopter’s arrival music.
Fun Fact: For PC players it’s also possible to use MP3 files placed in the “CustomSoundtrack” folder withing the game’s installation directory.
* Files must be located less than 2 directories deep under the “CustomSoundtrack” directory.
* The maximum is 100 songs.
* Please do not delete or move songs while playing the game.

Does the game save each Cassette Tapes you collect?: No, your collectibles progress isn’t automatically saved. After picking up a collectible you need to reach the next checkpoint to save the progress. If you die before saving the game, you will have to collect it again.

Where to find all Cassette Tapes in Metal Gear Solid 5: The Phantom Pain? The in-game collectibles locations for the Cassette Tapes will be described in this guide.

Timeline in minutes for the Cassette Tapes Locations Guide:

• [00:00] — All Info Cassette Tape Locations.
Where To Find Info Tapes: 90% of these Info Tapes are gained by completing the story missions and some by completing important Side Ops (indicated in a yellow color).

• [09:03] — All Music Cassette Tape Locations.
Where To Find Music Tapes: Music Tapes are found in the world by listing for music playing on the radio, but note that they may not be playing all the time. So if a location indicated in the video guide doesn’t show up for you, head back to your helicopter and enter the area again to make it appear. On top of listening for them, you can also use the binoculars’ microphone to be on the lookout for them.

• [26:28] — All Acquired Cassette Tape Locations.
Where To Find Acquired Tapes: Acquired Tapes can be found lying around in the field. They have useful in-game effects such as cancelling the enemy’s suspicion or alert.

Why Are Briefing Tapes Not Included: Because the Briefing Tapes cannot be played from the regular cassette tapes screen.
Instead, you must go to the [MISSION LIST] under the iDROID’s [MISSIONS] tab, highlight a mission, and press the Triangle button on PlayStation / Y button on Xbox & PC to play a tape with information pertaining to that mission. Use these tapes as a reference when selecting a mission.
These tapes can also be played during a mission by going to the iDROID’s [MISSIONS] tab.

Huge thanks to AFGuides for the guide video and tips.

Please comment if you have any additional secret Metal Gear Solid 5: The Phantom Pain Cassette Tapes location tips of your own, we’ll give you credit for it. – Thanks for visiting!