Turok 1 & Turok 2 remastered have been announced for PC! Turok: Dinosaur Hunter and Turok 2: Seeds of Evil are being revived AT LAST! FREAKIN’ YESSSSS!

In case you forgot the greatness of Turok, here is a gameplay video from the N64 version.

The remaster of both games will be based on the PC versions of Turok 1 and Turok 2 that came slightly after the N64 releases. They featured enhanced, crisper graphics with less fog, and upgraded music that contained more instruments (making it sound different). It’s this console gamers opinion that the music & sound effects were superior in the N64 version, whose less-is-more approach gave it greater punch & impact. But I digress.

Other improvements for these remasters, outside of a major graphical facelift of course, are on the docket; although exactly what this will be has yet to be revealed. Achievements will certainly be created for both titles, which will add a ton of replay value and will be very fun to unlock. 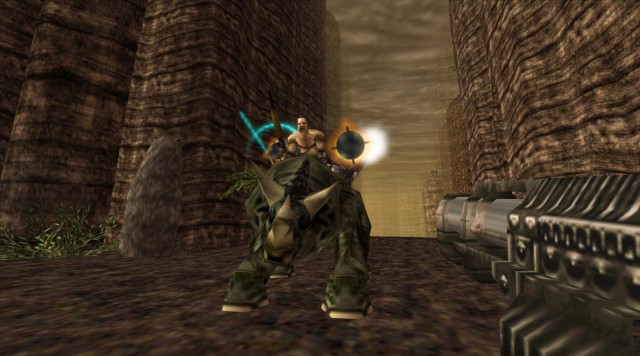 Will we see any online multiplayer?

Turok 2 features multiplayer, so hopefully it will be upgraded to run online. But maybe they could go back in and add multiplayer to Turok 1, which would be a very interesting prospect. However it’s unknown if they will change the game’s in any significant capacity, or simply remaster them.

Turok 1 & Turok 2 will be released for all major digital PC platforms including Steam, GOG, the Humble Bundle Store and through GamersGate, Greenman Gaming and via the developer’s own store.

From the Developer:
Stephen Kick, CEO and Founder of Night Dive Studios, explains, “When Turok: Dinosaur Hunter was first released it was nothing short of revolutionary. To that point, no game had ever offered the combination of graphics and an open world environment that Turok featured. We are very excited to have the opportunity to bring this great franchise back to life and to be able to share these great titles with today’s gaming audience.” 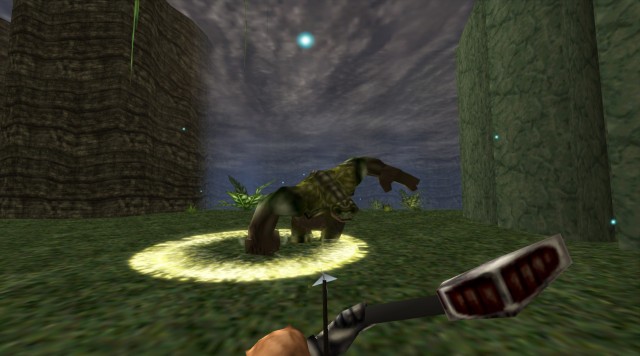 Pur-lin? Big Daddy’s is what I call them!

WOW! What absolutely amazing timing this is!

I just got done purchasing Turok: Dinosaur Hunter in it’s original cartridge format and replaying it on my actual Nintendo 64 on an oldschool TV.

And let me tell you, this game holds up PHENOMENALLY well! I had such a fun time with the game that I actually performed a Master Run. That is, I played through Level 1 all the way through Level 7 in ONE SITTING on HARD! Not only that, but I would go on to beat the game on Hard for the first time in my life, after beating it on Normal as well.

Then, just to add the cherry on the top, I replayed the entire game through on Easy, so that I could officially say I COMPLETED Turok 1 by beating it on Easy, Normal and Hard! 😀 I wanted to see if beating it on Easy unlocked a different set of cheats (it doesn’t, you get nothing lol). 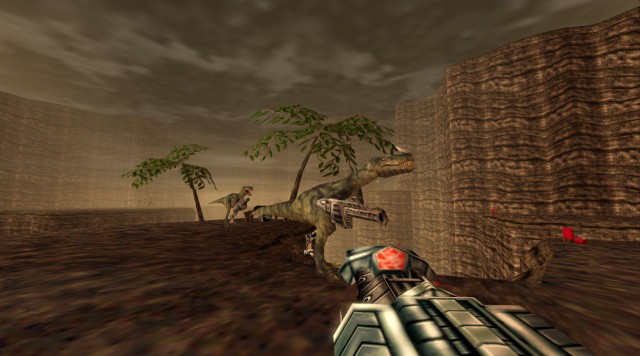 I previously thought beating the game on Hard would be IMPOSSIBLE. Cause the game is extremely difficult, and I had a really rough time on the final level on Normal. Take note however, I do things oldschool & refuse to use guides or look things up on youtube. If you know the layout and look at a map so you know where you are going in Level 8, then that’d make things way easier. I DID NOT have a map outside of the in-game one and never looked anything up. So I was playing it truly blind.

Much to my absolute amazement, I was able to conquer Level 8 on Hard without too much problem. Playing through on Normal prepared me as I learned the layout pretttty well. On Hard enemies do not drop ammo, so I thought running out of ammo would be the main problem. And enemies in the narrow hallways are virtually impossible to “skip” by just running passed. But all told, it was a HUGE personal accomplishment for me.

So then I moved on to Turok 2 for N64…. I found a gray cart copy of Turok 2: Seeds of Evil and purchased it without hesitation! So how is it?!

I own an Expansion Pak for my N64… and let me tell you right now. Turok 2 is UNPLAYABLE on N64.

I do not know how this can be, considering that, as a kid, I was able to get passed Lair of the Blind Ones, and to the Alien level (which I was never able to beat)… I remember knowing the layout so well that I could zoom through the levels without much problem.

Today… Maybe I need a brand-new N64 controller, but you CAN.NOT.AIM on the N64. The game is so clunky, that it is hard to dodge and precision shooting is nigh impossible. I tried changing the sensitivity of the stick in the options menu, turning off & on auto aim, I tried playing in both Hi-Def and Low RES (UGLY AS SIN), I thought low-res may solve the “clunky” problem…. NOPE. I’m telling you. The game is unplayable! 🙁 *sad face & much crying* 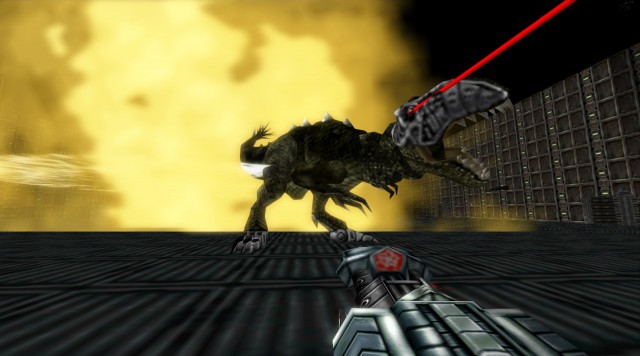 I AM THUNDER HEAR ME ROAR!

So given all that, I have given up trying to play the N64 version of Turok 2 (my childhood is ruined!). This makes me sad, as I’m on a total N64 kick and both Turok 1 and Extreme-G hold up extremely well and are a blast to play even today in 2015. There is simply no substitution to playing these classics without the original N64 controller.

But Turok 2. I refuse! I do not see how anyone could even make it passed level 1. I may still track down a copy of the PC version of Turok 2 (oldschool) because at least on PC, you can aim due to the mouse & keyboard controls. However I am a console gamer, and the idea of playing with Mouse & Keyboard and no N64 hurts my soul.

Even so however, I AM SUPER HYPED for these remakes! It’s about damned time!

I hope against all hope that these remakes will do the games justice. 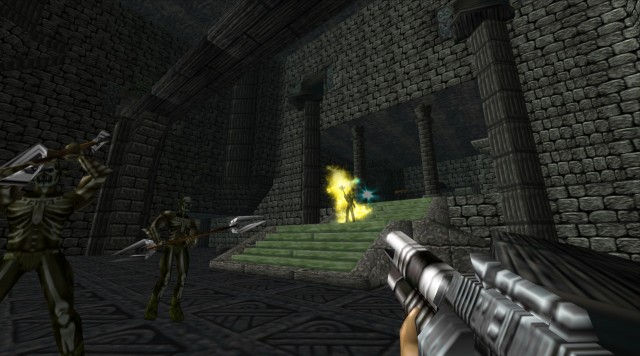 These mofos are dangerous!

Already, you can see how freakin’ weird Turok 1 looks in HD. Turok 2 will fare better I think, because it’s visuals absolutely crippled the poor ol’ N64 & pushed it’s graphical capabilities to the limits (beyond them). The game is simply too ambitious for N64, so now we will finally get to play both games in 60FPS (hopefully, if all goes well) and play them the way they were truly intended (sans N64 controller).

I can tell that Turok 2 would be absolutely amazing if it weren’t for the movement issues on N64.

It’s NOT the control scheme. I absolutely LOVE the Turok control scheme, which I prefer to the GoldenEye 007/Perfect Dark control scheme. Whenever I play those games, I change the controls to match Turok. So with a remaster, all of these issues will be solved!
The only question is whether they will change too much to lose the nostalgia factor (like the fog, which is part of it’s charm). I hope this does not happen, but even it does, I think the game’s will still hold up extremely well. Turok 2 is a great game, it was simply held back by the hardware. 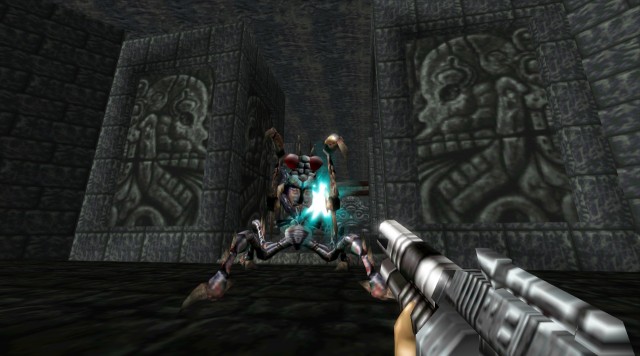 I pray that these games sell like gangbusters and PC-centric developer Night Dive Studios deems gamers fit to see console versions of both titles. As both games DESERVE to get console re-releases! And I think they’ll sell much better on console (where most people remember them from the N64 days) than on PC.

I also hope that these screenshots are early. The games need to get cleaned up further so it doesn’t look so odd.

Here’s the Turok 1 Remake image gallery.
Click on any of these image thumbnails to see the full-size photos: 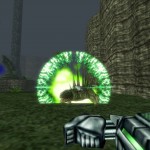 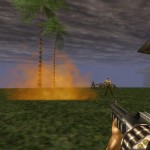 The Auto Shotgun rocks but I love the feel of the Normal Shotgun. 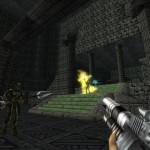 These mofos are dangerous! 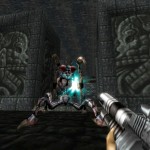 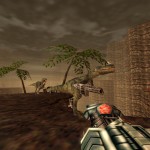 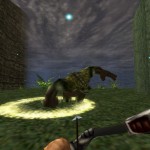 Pur-lin? Big Daddy’s is what I call them! 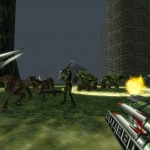 Four rockets are better than one! Or not. This weapon actually sucks in practice lol. 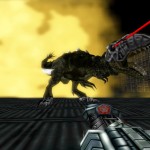 I AM THUNDER HEAR ME ROAR! 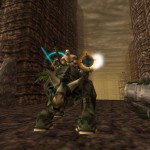 
How excited are you to see Turok 1 & Turok 2 being remastered?!