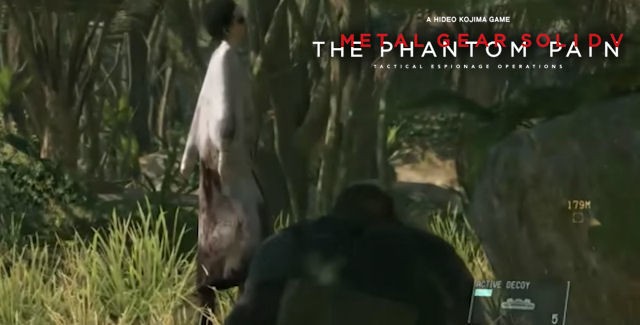 Easter eggs have been confirmed for Metal Gear Solid 5: The Phantom Pain. Watch footage of them all below.

The Lisa ghost from Silent Hills, aka the PS4’s P.T. demo, can be used as an Active Decoy balloon in Metal Gear Solid 5: The Phantom Pain.

It will become available to you in-game once you’ve expanded your Mother Base with an R&D platform that in turn has advanced enough to develop & upgrade this ghostly Decoy.

The strange occurrence of events in the Silent Hill series is described in a radio crime news report in the Metal Gear Solid 5: The Phantom Pain campaign.

This can be found at a barrel fire-lit campsite in a tent with a radio inside during the “Locate and rescue Shabani” mission in the Angola-Zaire Border Region of Ngumba Industrial Zone (North Top).

You’ll only be able to get Hideo Kojima into The Phantom Pain if you rescued him in Metal Gear Solid 5: Ground Zeroes. After completing the “Ground Zeroes” Main Mission, you’ll unlock Side Ops missions. Go play the “Intel Operative Rescue” Side Ops and upon completion Big Boss finds out the Intel Team agent VIP he rescued is actually the Metal Gear series creator Hideo Kojima!

He then eventually arrives at Mother Base in The Phantom Pain as a “special volunteer” and can be recruited as worker with a specialty in Intel (S-Rank rating) and further skills in Research & Development (A+ rank).

You can also recue Hideo Kojima in the “Intel Agent Extraction” Side Op. Fun quotes and all!

Find out what happens when you turn your tranquilizer gun & CQC on Revolver Ocelot at Mother Base in Metal Gear Solid 5: The Phantom Pain.

In “Episode 11: Cloaked In Silence”, if you take down Quiet during her boss fight when playing on Extreme difficulty, during the cutscene that follows she’ll start to look like Sniper Wolf who trained Big Boss.

Have you found any Metal Gear Solid 5: The Phantom Pain easter eggs?