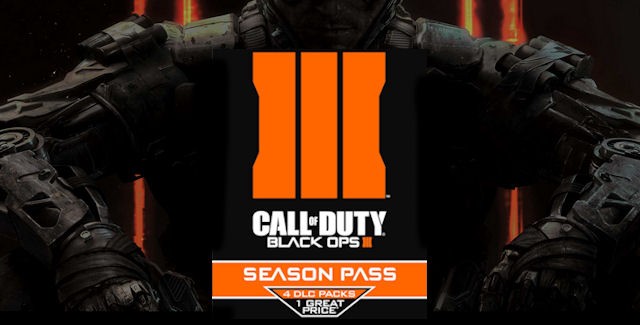 What are the Call of Duty: Black Ops 3 DLC release dates? Everyone’s asking that question and so far Activision have only confirmed the four action-packed DLC Map Packs in the Call of Duty: Black Ops 3 Season Pass will be “content available in 2016”, after the November 6th 2015 worldwide release of the main game. BUT based on previous years — which we got 100% correct *humblebrag* — we will show you the expected release date for each DLC in the list below!

For the first time in many years the Black Ops 3 DLC will be a timed PlayStation 4 exclusive for the first month. That means the Xbox One and PC releases will follow the next month. – Sorry everyone on Xbox, this year Sony was willing to pay more than Microsoft for the month early release of the DLC maps.

Note: The above release dates are not final and subject to delays. We will update this page if the dates change (seems to be 1 week later than previous years). We’ll find out more about each Map Pack when we get closer to the first DLC pack’s launch.

The 4 DLC Packs are titled: 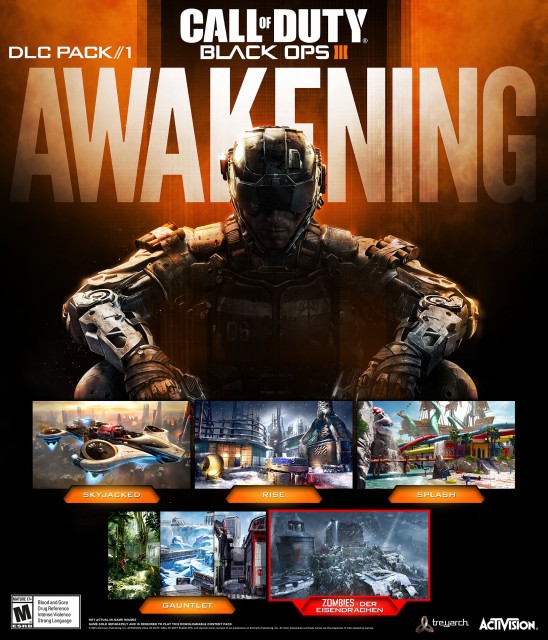 Call of Duty: Black Ops III’s epic Zombies DLC season begins here. In “Der Eisendrache”, Origins characters Richtofen, Nikolai, Takeo, and Dempsey embark on a suicide mission to an enemy research facility built upon an archaic site of unspeakable horror. Massive deposits of Element 115 have recently been discovered, delivering inspired new gameplay and — in Zombies tradition — a variety of plot twists and surprises to discover at every turn.

Take a behind-the-scenes look at Awakening, the first DLC pack for Call of Duty: Black Ops 3: 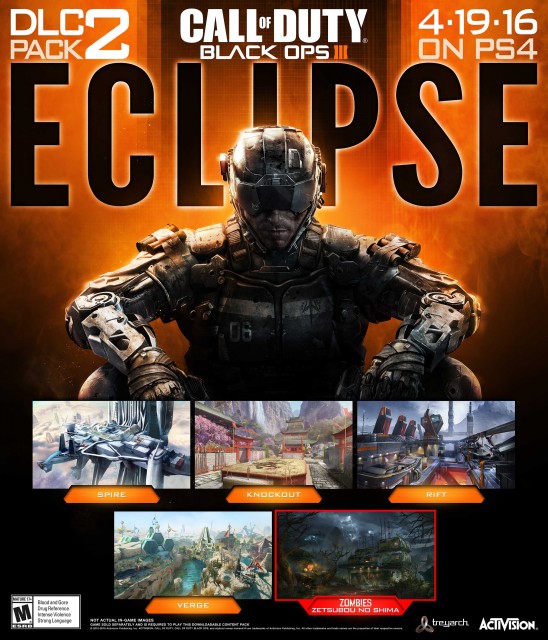 Take a look at Eclipse’s zombies map, part of the second DLC pack for Call of Duty: Black Ops 3: 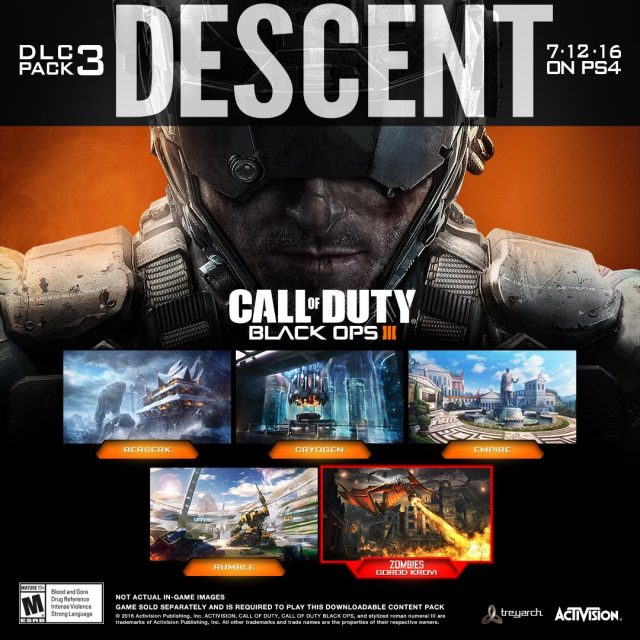 After escaping the swamps of Zetsubou No Shima, the Origins characters are hurled into an alternate, war-torn Stalingrad riddled with Element 115. Our heroes will face their most dangerous enemies yet among the remnants of a battle between giant mechanised soldiers and ferocious dragons controlled by Group 935. That’s right. Dragons.

Take a behind-the-scenes look at Descent, the third DLC pack for Call of Duty: Black Ops 3: 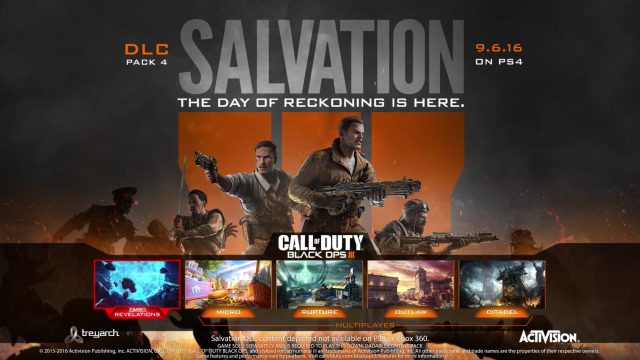 – Pack #4: Salvation — Includes four new multiplayer maps — Outlaw, Citadel, Rupture, and Micro — and Revelations, the thrilling climax of Treyarch’s Origins Zombies saga that has been eight years in the making. Salvation is available first on PlayStation 4 on September 6th, 2016.

In their epic journey through space and time, Richtofen, Dempsey, Takeo, and Nikolai come face to face with the mysterious Dr. Monty in The House.

Take a look at the fourth DLC pack for Call of Duty: Black Ops 3 at the top of this page.

Fans that order the Season Pass will be among the first to experience the return of Zombies with “The Giant” Map in all of its undead glory on Day One. Set in a World War II-era research facility featuring the weapon-upgrading Pack-a-Punch Machine, re-live the chaos of Treyarch’s classic “Der Riese” Zombies map, picking up the Zombies story with Dempsey, Nikolai, Richtofen, and Takeo where Origins left off.

Season Pass and “The Giant” Zombies bonus map are not available on Xbox 360 and PS3.” That last bit of news is pretty shocking! 😮

Aside from the Season Pass being available separately, the Digital Deluxe Edition and the Juggernog Edition will also come with the Season Pass, which unlocks access to the four forthcoming DLC multiplayer map packs (in-game) on the day they launch for your system of choice.

Each Map Pack comes with 4 multiplayer maps of its own, and early access to bonus DLC weapons!

Call of Duty: Black Ops 3 Season Pass holders will get all four DLC’s as part of the $50 / €50 / £35 package, which you can get during the 8 months in 2016 before the final DLC pack comes out. Otherwise, you’ll have to buy each DLC separately at a slightly higher price per DLC ($10 more total), since each one individually will set you back $15. The $10 discount is based on the Season Pass suggested retail price of $49.99 USD.

Call of Duty: Black Ops 3 expands the possibilities of Call of Duty Multiplayer. The new movement system allows players to fluidly chain movements together while playing in maps that have been designed from the ground-up to push strong head-to-head action. Choose to play as one of nine new Specialists, each with their own look, personality, abilities, and level progression system. Finally, equip up to five attachments and an optic while customizing nearly every aspect of your loadout with the new Gunsmith, then tap the power of the Weapon Paintshop to give your weapon a signature look.

What maps do you want to see in the Call of Duty: Black Ops 3 DLC?