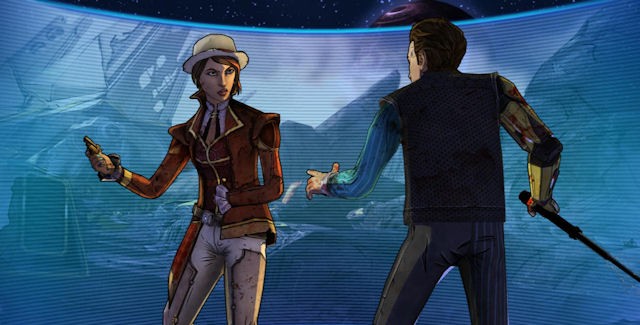 What is the Tales from the Borderlands Episode 5 release date? Telltale Games has promised that during Season 1 you can expect a new downloadable episode every 5 to 8 weeks. Yet prior episodes took 12, 14 & 8 weeks to arrive. As such, Episode 5 (titled “The Vault of the Traveler”) will arrive on October 20, 2015. – Page updated with the confirmed dates!

Note: Dumpy is missing from the poll since it’s unclear if it will return, but if it does we’ll hear its screams first LOL! 😆

While normally we’d get a sneak peek at the continued adventures of Rhys & Fiona on Pandora. No Tales from the Borderlands Episode 5 preview was included at the end of the Episode 4. 🙁 Which seems to happen at the end of each Telltale season. Which means we’ll have to wait at least 2 months to see the launch trailer with any gameplay footage for Episode 5.

Episode 5 Synopsis: “The past and Present collide in Rhys and Fiona’s final chapter.”

The Episode 4 chapter names hint at what events to expect:
• Chapter 1: A Maze Of Twisty Passages, All Alike
• Chapter 2: Unforseen Consequences
• Chapter 3: Give And Take (Mostly Take)
• Chapter 4: Definition Of Insanity
• Chapter 5: Time’s A Wastin’
• Chapter 6: What’s It Worth?
• Chapter 7: Tales Twice Told

Update September 16: While Telltale hasn’t confirmed the release dates for all platforms yet. They did mention that the final episode of the Tales from the Borderlands season is still under development. To quote…

“And one quick note for those looking forward to the season finales of Tales from the Borderlands and Game of Thrones – they are shaping up to be two of our most ambitious finales yet! Look out for more news on those coming out soon.”

Update October 7: Telltale keep hinting that after Minecraft: Store Mode’s first episode comes out on October 13, that we’ll be seeing a lot more Telltale for the month. Clearly suggesting the season finales of Tales from the Borderlands or Telltale’s Game of Thrones will be released on either the 20th or 27th of October. Stay tuned!

Update October 8: Telltale has announced release dates for the Tales from the Borderlands season finale falls on the week of October 20th, 2015! They also gave a sneak peek at “Episode 5: The Vault of the Traveler”, you can find that trailer at the top of this page.

Update October 16: Tales from the Borderlands: A Telltale Games Series Episode 5 – ‘THE VAULT OF THE TRAVELER’ arrives for download next week, from October 20th onwards!

Check out the latest trailer to get a glimpse of the chaos right around the corner. Secrets will be revealed, loyalties will be tested, and explosions abound in this climactic chapter!