Tales from the Borderlands Episode 4 Walkthrough 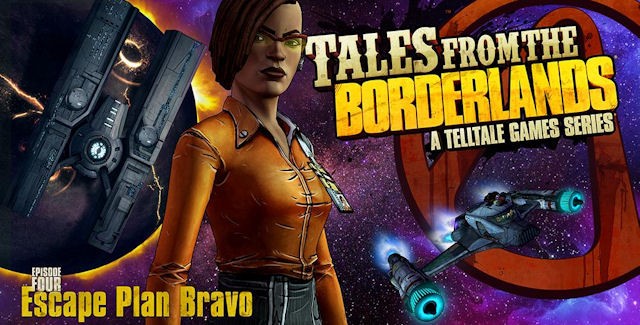 Our Tales from the Borderlands Episode 4 walkthrough will guide you through the beginning to ending moments of “Episode 4: Escape Plan Bravo” gameplay with strategy tips for this episodic graphic adventure game on the PC, Mac, PS3, PS4, Xbox 360, Xbox One & Mobile.

The full Tales from the Borderlands Episode 4 walkthrough is being livestreamed by Doug right now!

Tales from the Borderlands Episode 4 Walkthrough

Welcome to another full 2-hours-long Tales from the Borderlands Episode 4 walkthrough!

Synopsis: In this penultimate episode of the season, captured by the criminal Queenpin Vallory and her goons, Rhys and Fiona are forced to continue the search for the Vault beacon (the next Gortys upgrade) – at gunpoint. The beacon is on the Hyperion moon base – Helios – while our heroes are on Pandora… so there’s the pesky cold void of death known as ‘space’ to overcome. Even with assistance from a familiar face, and with a worryingly helpful Handsome Jack hitching a ride in Rhys’ head, getting on board the ominous ‘H’ is going to take every drop of guile, and quite possibly all the spunk you’ve got.

There is ONE last thing you should know about this episode… sacrifices will need to be made. Can you make the tough choices required to succeed?

Doug will be your voice-over commentator showing you around the areas in “Episode 4: Escape Plan Bravo”.

There you’ll find all Alternative Choices in Tales from the Borderlands – Episode 4 “Escape Plan Bravo”.

This video shows all the above listed choices in chronological order:

• Ending Choice #1: Rule Hyperion alongside Handsome Jack
(The choice scene starts at 16:25 minutes into the video)

Sadly no Episode 5 Preview gets shown after the ending.

Next Episode: Episode 5 will follow in around 2 months time! – Please join our “Tales from the Borderlands Episode 5 Release Date” discussion about what will happen in Episode 5: The Vault of the Traveler.

Thanks to Telltale Games, Doug, AFguides & GamerZombie for the walkthrough videos.