Nintendo NX Not As Powerful As PS4? Wii U Successor’s Manufacturing Begins

Rumor says the Nintendo NX will not be as powerful as the Sony PlayStation 4 — but may be on par with the Microsoft Xbox One — and will begin manufacturing soon, with Nintendo aiming at shipping 20 million consoles by launch next year in 2016. The “Nintendo NX”, in case you haven’t heard, is the successor to Nintendo’s commercial miss, the “Wii U”, which is likely to go down in history as Nintendo’s worst-selling major console system of all time.

Manufacturing of the NX is set to start soon, with pilot production set for October 2015 “at the latest”. Meanwhile Wii U manufacturing has begun to wind down, with only 2 million systems shipped in 2015 (unconfirmed by Nintendo). 9 Million Wii U systems have been shipped worldwide since it’s launch in 2012.

Here is a video discussing the announcement of the NX.

Manufacturing is expected to be finalized in February or March of 2016; with mass production to begin around May or June of 2016 with an expected launch in July of next year.

However all of this is due to reports and rumor and subject to change. The Foxconn deal comes from a report by Taiwan-based “Digitimes“.

On the rumor of the NX being less powerful than the PlayStation 4, it comes from a tweet by “Liam Robertson” from “Unseen64”, who has had wild success and incredible accuracy in terms of his rumors being true. His long track record of being correct makes this latest NX rumor credible. 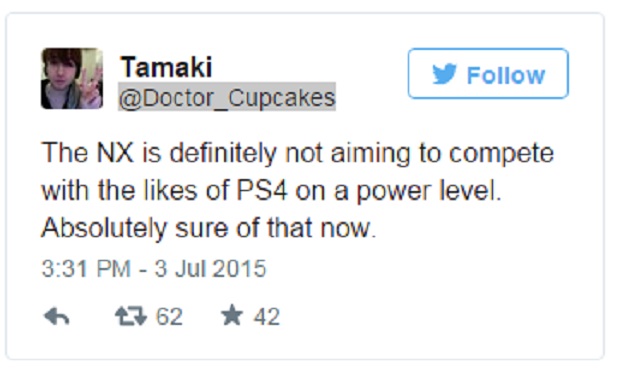 “The NX is definitely not aiming to compete with the likes of PS4 on a power level. Absolutely sure of that now.” @Doctor_Cupcakes

Further adding, “Talking to the right people :)” when asked “What makes you say that?” in regards to the NX’ polygon-pushing power.

The Nintendo NX system was announced by late Nintendo President Satoru Iwata (R.I.P) this past March, where they confirmed to investors that the system was in development, and that it would be revealed officially in 2016 as the successor to the Wii U.

Tied into the new system will be Nintendo’s successor to “Club Nintendo” and their mobile platform deal with DeNA (iOS/Android). The former will be a reward system that works between multiple Nintendo devices; the latter allows mobile-developer & publisher DeNA to co-develop new games using Nintendo properties for mobile platforms with Nintendo’s guiding hand.

Exactly what these games will look like is unknown, but this landmark deal will mark the first time Nintendo has released it’s titles for non-Nintendo platforms. Although in this case, Nintendo sees mobile platforms as simply “another screen in which gamers can access Nintendo content & software”. The DeNA titles are rumored to be smaller & not AAA like you will find on Nintendo’s core platforms.

It is rumored that the Nintendo NX may be a home console/portable system combo, and may include Nintendo’s long-in-development health & wellfare products that have yet to see the light of day, like their Vitality Sensor (a thumb-device announced in 2009 that reads your heartbeat, originally to be for Wii) and popular products in the vein of the Wii Balance Board and Wii Fit.

Nintendo had previously announced that their health & wellfare products would be a key focus of their future, but it’s unknown if it will get major push with the NX or if the health & wellfare focus is a thing of Nintendo’s past.

Personally, it is very disheartening to learn that Nintendo may not compete graphically with the PS4 & Xbox One with NX.

If this rings true, then I think gamers will be incredibly disappointed and this may be the true nail-in-the-coffin for Nintendo as a platform manufacturer.

Right now, their lack of major third-party releases due to an underpowered system, and their lack of a competitive online environment, among other issues, has lead to gamers all but abondoning Nintendo’s Wii U system.

All these non-competitive issues have caught up to and bitten them hard.

While the 3DS has kept Nintendo afloat (and rightfully so, it’s a fantastic portable); they are losing major ground in the war on the console front.

What Nintendo needs to realize is that graphical power is what will determine whether Mass Effect IV, The Elder Scrolls VI, Grand Theft Auto VI the next Assassin’s Creed, et al, will grace the NX console or not.

Developers would love to include Nintendo’s audience in their fanbase, but won’t do it if the development is too troublesome because of underpowered hardware or a lack of a competitive online infrastructure, both of which the Wii U suffered from.

Nintendo MUST correct this for their NX, or risk another Wii U disaster.

Let’s hope Nintendo has truly learned from their mistakes, if only they could get those two above pieces of the puzzle right (at least make the system graphically competitive); then add the innovation that only Nintendo manages to bring to the equation layered atop; THEN you’d have a must-buy product. Come on Nintendo, I have faith in you!

Are you excited about the Nintendo NX? Do you think the NX will be as powerful as the PS4?