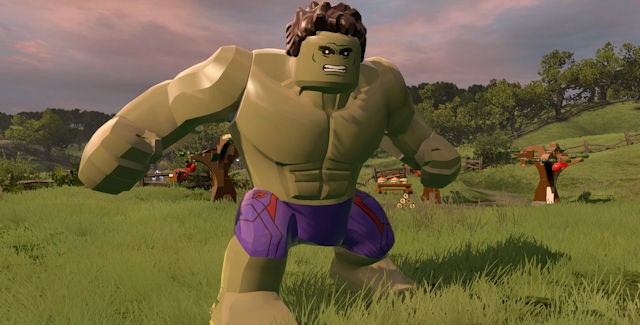 The bad news: The Lego Marvel’s Avengers release date is delayed into 2016.
The good news: It’s only been delayed into January of next year. To be exact, it’s releasing in America/Canada on January 26th, 2016 and in Europe/Australia on January 29th, 2016.

In addition, an exclusive UK retailer will be announced very soon, where consumers can pre-order their copy and receive an exclusive Silver Centurion Iron Man LEGO minifigure, which is one of the many suits that will be playable in LEGO Marvel’s Avengers. The minifigure will ship along with the game for online customers; in-store customers will receive at time of purchase at the exclusive UK retailer while stocks last.

Watch the first gameplay footage from Gamescom 2015 of these characters in action at Hawkeye’s AKA Clint Barton’s farm, which is a free-roaming area (like New York) in the game where you can do races, find characters, explore, and have an adventure. As you’ll see in the demo video, in free-roam areas Hulk can do massive leaps! 😀

Going back one month to July, we’ve found a Comic-Con 2015 live demo of the game showing the Battle of New York level action from the Avengers: Age of Ultron movie. This video also reveals Quicksilver and Scarlet Witch’s animations as they beat up the baddies.

Going back another month to June, here’s an E3 2015 stage demo once again presented by from Traveller’s Tales.

Are you ready for Lego Marvel’s Avengers to be released?