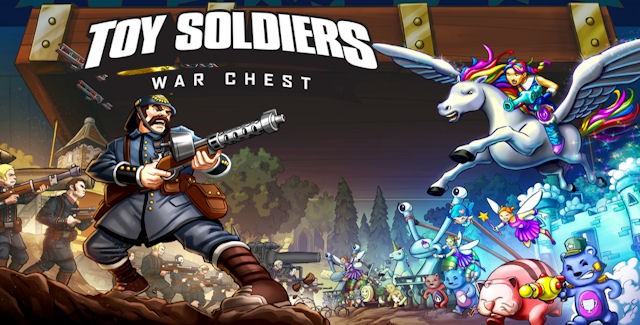 The Toy Soldiers: War Chest walkthrough will guide you through the beginning to victory moments of gameplay with strategy tips for this strategic tower-defense/action hybrid game on the PS4, Xbox One & PC.

Let’s start the Toy Soldiers: War Chest walkthrough with a “What Is It?” introduction video!

Please note that viewers must be at least 13 to watch, so no harm comes to those with innocent eyes. This game includes Tobacco Reference and Violence.

Ubisoft and Signal Studios have released Toy Soldiers: War Chest, the next iteration in the Toy Soldiers series. Leaving the battlefields of past eras behind, players face off against rival toy armies to determine who rules the battlefield.

With eight unique armies to protect your tox box with – all with distinct strengths and personailties – there’s a faction for every play style. Customize your loadout before battle and earn new items while conquering and exploring over 15 unique maps. Whose toys are best? Grab up to three other friends and find out! Multiplayer includes up to 2v2, survival mode, and you’ll be able to play any of the modes co-operatively, locally on one console or online. Get new maps and earn new content every seven days with the Weekly War Challenges.

With more heroes, missions and playable armies than any previous iteration of Toy Soldiers, Toy Soldiers: War Chest is the most expansive title to date. Additional features in the game include more turrets and turret upgrades, more barrages, new game modes and expanded multiplayer and cooperative gameplay.

Quotes from the Creators:

”Partnering with Ubisoft presented an opportunity to create the Toy Soldiers game we had always envisioned,” said D.R. Albright III, the Founder of Signal Studios. “Gamers of all ages can play as and face-off against toys familiar to them from their childhood to recreate the battles of their imaginations. Fans will have a great time learning how each army plays, and the individual strengths of their troops and weapons.”

“Toy Soldiers has always been a top digital arcade title on XBLA and we are very proud to bring the new opus of this well-known franchise on next-gen. We strongly believe the universe of Toy Soldiers will offer a unique and intense gaming experience and we hope that fans will enjoy the deep game mechanics” said Thomas Painçon, EMEA Digital Publishing Director at Ubisoft. “Toy Soldiers is a unique blend of tower defense and strategy, and Toy Soldiers: War Chest makes the toy box eternal, letting gamers face off against rival toys and friends to determine which army will reign victorious.”

Brian will be your voice-over commentator showing you around the game’s starting solo mission and multiplayer VS match as a tutorial to show you the ropes.

Defend your toy box and take the battle to your enemies with one of four incredible armies. Lead from the strategic level, placing and upgrading turrets, or take direct command of turrets or heroes to decimate the opposition. Upgrade and customize armies while fighting through each of the four campaigns or take the fight online in new and returning multiplayer modes.

Phantom’s interstellar base features a Holografic game with LED Illumination. Trespassers will be attacked on sight for the good of mankind.

The Serene home of Starbright’s pixi allies, Bubble Brook trickles down from Marshmallow Mountain, and empties into Gumdrop Bay.

Black Dragon’s Army scours the countryside, enslaving what they do not devour. Reenact their conquest with this war ravaged playset.