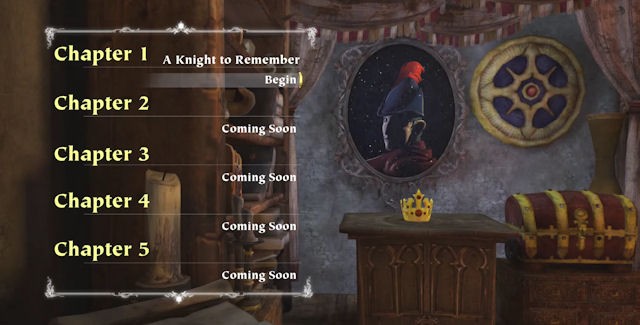 What is the King’s Quest 2015: Chapter 2 release date? Hints were given in a Sierra Games launch press release that leads us to believe we can expect a new downloadable episode every 2 months. It’s unknown what the roll-out schedule will be until Chapter 2 comes out of development (hopefully by the last week of or December), so all we have confirmed is that that will be in 2015. – UPDATE: The final release date for Chapter 2 is December 16th, 2015!

So what did the press release say exactly?

To quote: “*Subsequent chapters and epilogue may be downloaded in-game as available upon individual release throughout 2015 and 2016.”

If the chapter releases are similar to how other episodic adventure games have a spread-out release, it could mean the 4 remaining chapters will arrive over the next 8 months, around 1 new chapter being released every 2 months. But we won’t know for sure until Chapter 2 gets released… which hopefully happens by the end of September 2015.

Chapter 2 Synopsis: Unconfirmed as of yet, but the Chapter 1 ending suggests King Graham will continue telling his stories from his sickbed.

This lead-in to Chapter 2 can be seen at 19 minutes into the “Chapter 1: A Knight to Remember” ending video:

“Season 1” Info: Developed by The Odd Gentlemen, an independent studio with a talent for crafting fantastical tales, characters and worlds, the new King’s Quest rekindles the classic charm and curiosity that has captivated fans of this family-friendly series for over 30 years. As an aging King Graham looks back on a life of heroic adventure with his precocious granddaughter, Gwendolyn, players will be able to experience first-hand the unforgettable puzzles, places and personalities of his greatest untold stories. The first passage in a five-chapter journey, King’s Quest: A Knight to Remember unfolds on Graham’s early days as a bright-eyed teen in Daventry, competing in a contest of wit and valour for a knighthood in King Edward’s royal court.

In this video The Odd Gentlemen founder & the game’s Creative Director Matt Korba as well as Producer Lindsey Rostal talk about the early parts of the new King’s Quest.

Up next, PlayStation’s Meredith Molinari interviews Lindsey Rostal and the video ends (at 8:30 minutes in) with further Chapter story ideas, including a fun Season 2 idea for another princess with potentially more grandkids to tell stories to.

The description reads: “In King’s Quest – Chapter 2: Rubble Without a Cause, Goblins have kidnapped everyone in Daventry, and a newly crowned King Graham must learn to be the leader the kingdom needs. Players will influence his decisions along with the events that shaped the kingdom.

Continue the extraordinary journey across the world of Daventry, full of whimsical characters, charming puzzles, and perilous dangers.”

Update December 1: Sierra has announced today that King’s Quest: Rubble Without a Cause, the second chapter of the new King’s Quest, is expected to launch worldwide on 16th December 2015 on the PlayStation 4, PlayStation 3, Xbox One, Xbox 360 and Windows PC via Steam.

In this latest page in the acclaimed reimagining of the classic adventure gaming series, King Graham takes players back to his first test as ruler of Daventry. When a band of goblins holds the kingdom hostage, a newly crowned and ill-equipped Graham must lead a daring rescue to free his people and prove himself the leader they deserve. But the choices he makes along the way may have dire consequences for those most counting on him.

Will Graham & his friends unearth a way to escape their rock-brained captors? Will he take for granite everything he learned as an adventurer? Does he have the stones to reclaim his mantle & lead his kingdom to safety? Will the hat make it out ok?

“Chapter 2: Rubble Without a Cause” Announce Teaser: