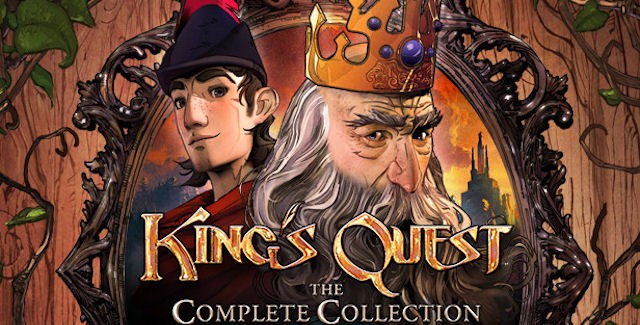 The King’s Quest 2015 walkthrough will guide you through the beginning to ending moments of gameplay with puzzle solutions and strategy tips for this episodic adventure game on the PC, PS3, PS4, Xbox 360 & Xbox One.

Let’s start the “King’s Quest 2015 – Chapter 1: A Knight to Remember” walkthrough with an intro video!

Chapters Download Note: If you bought the “King’s Quest: The Complete Collection”, then future chapters can be downloaded from in-game upon individual release throughout 2015 and 2016.

Welcome to the King’s Quest 2015 walkthrough!

Developed by The Odd Gentlemen, King’s Quest rekindles the classic feelings of exploration, wit and wonder that have always defined this family-friendly series since its introduction over 30 years ago. – The first entry in a planned five-chapter arc, King’s Quest: A Knight to Remember sets the stage for an unforgettable journey to come with original places, puzzles and personalities to discover.

For starters, the game’s Producer Lindsey Rostal from developer The Odd Gentlemen will be your voice-over commentator, showing you around the game’s early areas with backstory and puzzle tips.

In the first part of the walkthrough, you will experience the first boss fight of the new King’s Quest series.

King Graham reflects on a life of adventure with his granddaughter to recover the fable mirror from the Dragon. Use your cleverness to hide from the dragon.

We’re off to visit Daventry for the Tournament. Help the Merchant of Miracles find a wheel. Get Across the river. And search for odd Horn’s missing Mouth Piece.

Find a way across the Missing Bridge to get to the Knight Auditions. The video guide shows the Chivalry Test Puzzle being completed.

Graham chose a path to pursue for the eye. Find the Hideous Beast Eye. And buy a gardening tool called the Epic Weed Whacker.

The Water Well & Rope Puzzle must be solved. Graham and Achaka the Knight team up, to face the Dragon in the Water Well. Graham uses the gardening tool to cut the Spiniferous Thornweeds.