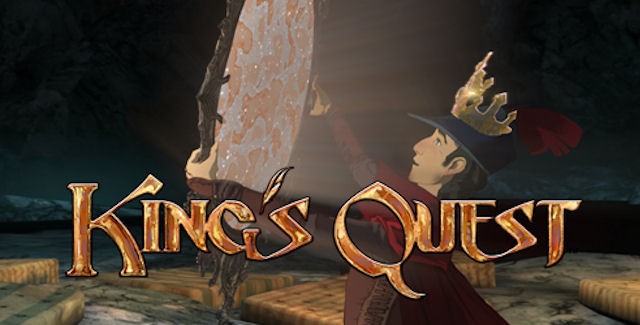 Here you get gameplay tips from two of the game’s creators.

In this video The Odd Gentlemen founder & the game’s Creative Director Matt Korba as well as Producer Lindsey Rostal talk about the early parts of the new King’s Quest.

Next, we get more info on the first episode titled Chapter 1: A Knight to Remember. It shows why the game’s attention to detail and story got Roberta and Ken Williams’s approval.

There’s no guarantee these cheat codes like god mode will work, but try them out if you’re playing on PC.

To get into the game console mode press “shift-ctrl-7” all at the same time (or if that doesn’t work, try left & right shift keys simultaneously like how it was in the first King’s Quest game with the 0 cheat mode). You won’t be able to play the game again until you hit the same keys to exit that console commands panel.

Once you are in the codes console you’ll see a prompt asking for your password. There you can enter in all the below listed codes in lower case letters.

• god: This is the god command, it makes you practically invincible. He can still die from the River of Death and from falling great distances – mainly because it would have been a pain to program – so don’t be too confident. However, monsters can’t hurt you!
• ungod: Turns God mode off.
• bump – makes you move a little bit forward and through walls.
• teleport: Type this and your map clears completely. Click on the current world’s map and you will be teleported to that spot. Click somewhere high on the side of a mountain, though, and he could fall to his death! (This only works in the land you are in – all others go away.)
• noConCollide – clipping mode, walk-through walls, etc.
• conCollide – turns off clipping mode.
• setFirstPerson
• setThirdPerson
• give templearmor1: Best armor.
• give templesword: Best melee weapon.
• give icecrossbow: Best ranged weapon.
• exist
• listActive
• handsOff
• show
• lookup –
• mask
• console
• run
• alias
• ruth – easter egg.
• jeffo
• leslie
• welch-piel – easter egg.
• adam
• oscar – easter egg.
• rocket – easter egg.
• testCast

There are no confirmed King’s Quest 2015 cheats on Xbox 360, Xbox One, PS3, PS4 & PC yet. So until they are discovered, we made the handy King’s Quest 2015 guides listed above to help you with tips and tricks for the game!

Do you know of any King’s Quest 2015 cheats or unlockables?
Let us know in the comments, you’ll get credit for finding out. – Thanks for visiting!