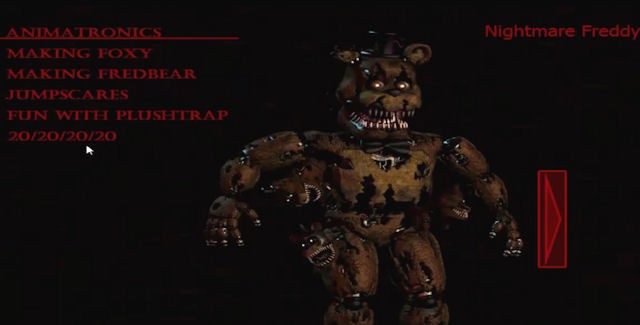 Here we will show you how to unlock all Five Nights at Freddy’s 4 codes with a cheats list that’s valid for the PC, iOS & Android versions.

How To Unlock Nightmare Mode (Night 7)

After finishing Night 6, Night 7 is a Nightmare challenge you can start by selecting ‘Extra’ from the Main Menu and going to ‘Nightmare’. It’s under ‘Jumpscares’ & ‘Fun with Plushtrap’.

This video shows how to go from Night 6 to 7:

This video shows how to enter the cheat code that unlocks Night 8:

Note: See our walkthrough page to find out how to finish up to Night 6 (and beyond).

Do you know of any Five Nights at Freddy’s 4 cheats or unlockables?
Let us know in the comments, you’ll get credit for finding out. – Thanks for visiting!