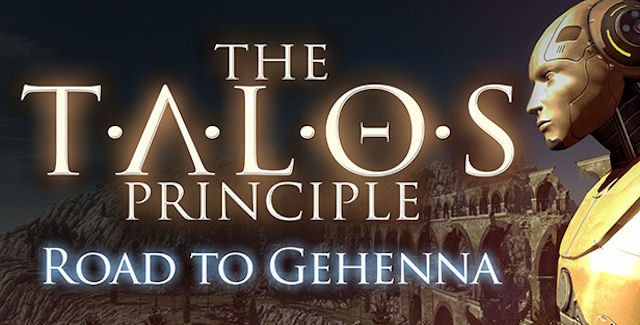 The Talos Principle: Road to Gehenna walkthrough will give you all puzzle solutions and guide you through the beginning to ending moments of gameplay with strategy tips for this first-person-puzzler game expansion on the PC, Mac, Linux & later PS4.

The Talos Principle gets a 4 episode downloadable expansion pack, titled Road to Gehenna, from developer Croteam. Enjoy discovering the wonders of Gehenna, and may the words be with you!

Let’s start The Talos Principle: Road to Gehenna walkthrough with an introduction video!

Please note that viewers must be at least age 7 to watch, so no harm comes to those with innocent eyes. This game includes non realistic looking violence towards fantasy characters.

Index of The Talos Principle: Road to Gehenna Guides:

The Talos Principle: Road to Gehenna follows the narrative of Uriel, Elohim’s most beloved messenger, as he explores a strange, hidden part of the simulation on a mission of mercy and redemption in an attempt to free the souls of the damned at all costs.

This substantial expansion consists of four episodes that take experienced players through some of the most advanced and challenging puzzles yet. The Talos Principle writers Tom Jubert and Jonas Kyratzes have returned to pen the expansion and show players an entirely different side of Elohim’s world through a journey to Gehenna filled with new characters and a new society with its own history and philosophy.

Welcome to The Talos Principle: Road to Gehenna walkthrough!

Joe will be your voice-over commentator showing you around the game’s levels.

Immerse yourself into the magic of the Gehenna world and be prepared to challenge your mind with groundbreaking puzzles that will shake you to the bone.

This Intro and World 1 (Medieval World) story playthrough of the Road to Gehenna DLC, includes all puzzles, narrative and terminal dialogue.

Next, you get to see all puzzles, narrative and terminal dialogue in World 2 (Egypt World).

Get ready to solve all puzzles, explore every narrative and find all terminal dialogue in World 3 (Rome World).

At the end of World 4 (Floating Island World), you’ll get the no-star ending to the “Road to Gehenna” expansion.

How To Unlock The First Ending?: The ending can be initiated after freeing all 17 of the prisoners in Worlds 1-4.

This is the normal ending you get if you decide to collect no stars and not free the Admin.

How To Unlock The Star World?: Find all the Stars in Worlds 1-4 using our “The Talos Principle: Road to Gehenna Stars Locations Guide“. Then go to the back of World 4’s dome area, drop down to the mini-island at the back there, and then take a jump-trip using all the now-activated fans as you leap from floating mini-island to mini-island. Eventually you’ll reach the Star dome / room, open it by inserting all your Stars Tetris-style, and teleport away to the Star World.

Getting all Stars, and completing the 7 Star World puzzles (you need all 7 sigils), is required to open the door to free prisoner #18 (the Admin) in the bunker below the ascension platform. Which can give you the good ending if you convince the Admin to stay behind and upload/ascend your soul along with the other 17 prisoner souls you rescued in Worlds 1-4.

Here’s a full guide for the final puzzle room after using 10 stars. It includes all 7 puzzle solutions and one of the game endings. There are 3 of these final endings you get if you free the admin by getting the 7 sigils from the star room.

Ending Choice 1: This is what happens if you persuade Admin to sacrifice himself to send you through.

Ending Choice 2: This is what happens if you sacrifice yourself to send Admin through.

Ending Choice 3: This is what happens if you and Admin choose to stay behind together.

Big thanks to Croteam & Joe for the puzzle tips and walkthrough videos.