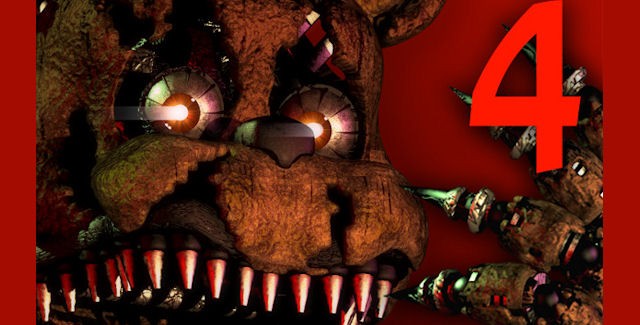 The Five Nights at Freddy’s 4 walkthrough will guide you from the start, past all the jumpscares, to the good ending with strategy tips for Scott Cawthon’s point-and-click survival-horror game on Windows PC, iOS & Android.

“This time, the terror has followed you home.” -FNAF4

Let’s start the Five Nights at Freddy’s 4: The Final Chapter walkthrough with an introduction video!

Please note that this game may not be suitable for younger viewers / players due to the game’s many jumpscares and nightmare-ish setting.

In this last chapter of the Five Nights at Freddy’s original story, you must once again defend yourself against Freddy Fazbear, Chica, Bonnie, Foxy, and even worse things that lurk in the shadows. Playing as a child whose role is yet unknown, you must safeguard yourself until 6am by watching the doors, as well as warding off unwanted creatures that may venture into your closet or onto the bed behind you.

You have only a flashlight to protect yourself. It will scare away things that may be creeping at the far end of the hallways, but be careful, and listen. If something has crept too close, then shining lights in its eyes will be your end.

Welcome to the Five Nights at Freddy’s 4 walkthrough!

Cory will be your voice-over commentator showing you around the game’s areas.

The challenging Night 3 gets successfully completed in this video guide.

Get ready to finish Night 4.

Get ready for the unbelievable ending to Five Nights at Freddy’s 4: The Final Chapter that shows who caused the bite of ’87.

You didn’t think Night 5’s sad ending was it did you? There’s a good ending too!

– Night 6 unlocks in the Main Menu as ‘6th Night’ after finishing Night 5.

From the game’s Main Menu you can select to see all Jumpscares (as shown in the video), which reveals there will be a Night 7 animatronic.

– Night 7 is a Nightmare challenge you can start by selecting ‘Extra’ from the Main Menu and going to ‘Nightmare’. It’s under ‘Jumpscares’ & ‘Fun with Plushtrap’.

Note: To see the Night 7 solution, skip to 5:30 minutes into the video guide.

Thanks to Scott Cawthon, Cory Kenshin, Party Wolfe & FusionZGamer for the tips and walkthrough videos.

Do you need help anywhere? Please don’t hesitate to ask in the comments section below. We’re here to help out! Or just comment to let us know if you want to see Five Nights at Freddy’s 5 to be made?