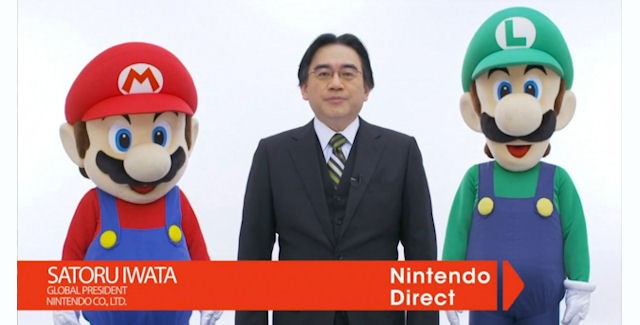 Yesterday was a sad day for the world of gaming. Nintendo today announced that their 4th President, Satoru Iwata, has passed away at the age of 55 due to cancer. RIP Satoru Iwata! 😥

To quote Nintendo’s press release: “Nintendo Co., Ltd. deeply regrets to announce that President Satoru Iwata passed away on July 11, 2015 due to a bile duct growth.”

“On my business card, I am a corporate president. In my mind, I am a game developer. But in my heart, I am a gamer.” -Satoru Iwata in his keynote speech at GDC 2005.

Mr. Iwata started out in HAL Laboratory, where he helped program Balloon Fight, EarthBound, and the Kirby games, until being promoted to President of HAL Laboratory in 1993 when he saved the company from bankruptcy.

He joined Nintendo in 2000 as the head of Nintendo Corporate Planning Division. When Hiroshi Yamauchi, Nintendo’s president since 1949, retired on May 31, 2002, Iwata succeeded him until the day he died. Under his leadership Nintendo was reinvigorated as a company with the huge successes of the Nintendo DS handheld and Wii console that took the world by storm and earned the company billions of dollars in profit.

Here’s a video tribute to Satoru Iwata’s many new game announcement presentations over the years.

Next is a career accomplishments overview video that also shows all of Iwata’s games starting at 5:39 minutes.

Update: Nintendo’s Shigeru Miyamoto issued a statement about the loss:

To quote: “Nintendo of Europe is today mourning the passing of Mr Satoru Iwata, Nintendo’s Global President. It is difficult to put into words the sadness we feel at this time. Mr Iwata was a strong leader, a unique figure in the gaming industry and an important part of Nintendo’s history. He was a visionary in every sense of the word and we will miss him dearly. Just as Mr Iwata challenged us to always push forward, we will ensure his legacy lives on through our ongoing work to always surprise and delight our fans. At this time our thoughts are with his family.”

“As we gather here today for a joint funeral with Nintendo Co., Ltd. and Mr. Iwata’s family, I would like to share my heartfelt condolences. President Iwata, allow me to call you Iwata-san, just as I always used to.

Iwata-san, you left us far too soon. Having just chaired our shareholders’ meeting the other day on June 26, the news of your sudden death has left all the employees overcome with a deep sorrow. The late Yamauchi-san passed the baton to you in naming you the president of Nintendo in 2002, and the two Senior Managing Directors of the company, Shigeru Miyamoto and I, have been assisting and working alongside you. Being rather short-tempered myself, the thing that I am most deeply struck by is that you were a true leader in every sense of the word, overflowing with compassion for people. You always maintained a two-way dialogue, even with the next generation of employees, or with much younger members of the development and marketing teams, or with employees outside of Japan whose different customs and cultures can make communication challenging — sometimes even admitting your own mistakes to them. You demonstrated this through your belief that people could eventually come to understand one another, and your strong conviction that the best way for us to grow is through patient communication, even if it took several times, a dozen times or even seemingly endless discussion.

You succeeded in planting the seed in employees’ hearts that, in order to solve an issue, there is a fundamental cycle whereby you make a hypothesis, execute the plan, see the result and then make adjustments, and by which you have caringly nurtured these seeds to sprout and mature into plants.

Until now, our successors and the younger generation would take a few first steps and then look back at you for guidance because they could not tell if they had chosen the right path. Today they cannot ask for your guidance anymore.

However, I am sure that they have already made the firm determination that they will continue on their own, making the hypothesis, executing the plan, seeing the results and reflecting on the results to improve and adjust by themselves.

In the face of your unbelievable passing it will surely take some time before we can emerge from this deep sorrow. Please know, however, that the seeds you have planted, and the plants that have sprouted will put forth small flowers as they bring smiles to the faces of people around the world, blossom into a grand flower bigger than even you, our leader, Iwata-san. Together with Miyamoto and others of our generation, we swear in our hearts that we will continue our efforts so that, someday, we can report and present to you the blossoming of these flowers. May you continuously watch over and guide us managers, our employees and your family.

On behalf of all of us, I would like to offer my heartfelt condolences and sincerest prayer. May you rest in peace, Iwata-san.”

Whatever your beliefs are on life and death, I think we can all agree that Mr. Iwata deserves a 1UP Mushroom or a Maxim Tomato powerup to live another life someplace, somewhere, maybe in Kirby’s Dream Land? Thanks for all the fun games that made us smile and gave us good memories Iwata-San!