Tales from the Borderlands Episode 3 Walkthrough 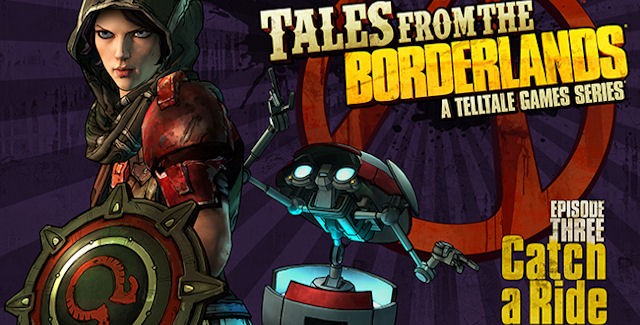 Our Tales from the Borderlands Episode 3 walkthrough will guide you through the beginning to ending moments of “Episode 3: Catch a Ride” gameplay with strategy tips for this episodic graphic adventure game on the PC, Mac, PS3, PS4, Xbox 360, Xbox One & Mobile.

The full Tales from the Borderlands Episode 3 walkthrough (Fiona choice) is being livestreamed by Doug right now!

Tales from the Borderlands Episode 3 Walkthrough

Welcome to another full 2.5-hours-long Tales from the Borderlands Episode 3 walkthrough!

Synopsis: After a dizzying escape from a very-near-almost-certain-death scenario (involving statuesque buttocks), Rhys and Fiona find themselves looking for another piece of the puzzle that will lead them to the untold riches of Vault key ownership. Lost in the mysterious jungle of an Atlas terraforming facility, Fiona finds help from an unexpected mentor, Rhys continues to share brain-space with the disembodied mind of a dead dictator, and love is in the air. Pursued by the ruthless criminal ‘Queenpin’ Vallory, and with very little help from Vaughn’s accountancy skills (or stellar abs), getting anywhere near the Vault will be entirely up to you.

Doug will be your voice-over commentator showing you around the areas in “Episode 3: Catch a Ride” (Handsome Jack choice).

Chapters covered in Part 2 are:
• Chapter 4: So Many Bandits, So Little Time
• Chapter 5: Rupture
• Chapter 6: Maneater

Finally, we have the Episode 3 Ending: Angry Eyes & the Episode 4 Preview at 19:53 minutes:

Note: Both playthroughs have been included on this page, Fiona up top and the Handsome Jack choice below.

Here are all Alternative Choices in Tales from the Borderlands – Episode 3 “Catch a Ride”.

Next Episode: Episode 4 will follow in around 2 to 3 months! – Please join our “Tales from the Borderlands Episode 4 Release Date” discussion about what will happen in Episode 4: Escape Plan Bravo.

Thanks to Telltale Games & Doug for the walkthrough videos.