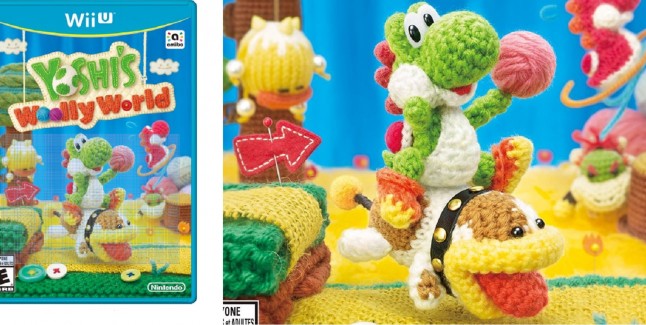 The Yoshi’s Woolly World release date for Wii U has been announced as October 16th, 2015 in America. The game will be released in Europe on 26th June and in Australia on 25th June, so European fans will get their Yoshi goodness this month! (It hit Japan on July 16th)

Nintendo also revealed in this second Making of Yoshi’s Woolly World behind-the-scenes video (Developer Story) that Amiibo support will allow players to change Yoshi’s pattern into that of the Amiibo they touch to the GamePad. So you can make a “Samus Yoshi” pattern or a “Mario Yoshi” pattern or a “Captain Falcon Yoshi” pattern! Neat!

She (Nintendo’s Emi Watanabe) also reveals how Nintendo came up with the previously announced “Yarn Yoshi Plushy Amiibo’s” that will be released alongside the game. The Yarn Yoshi Amiibo will initially come in Blue, Green & Pink colors.

Check out this Yoshi’s Woolly World documentary to see how Emi Watanabe herself came up with the idea for Yarn Yoshi at her home as a hobby, and how Nintendo adopted it for Amiibo! This video is from Nintendo’s E3 2015 Digital Event.

Team up on a grand Yoshi adventure!

Set off with a friend through a wild, woolly world in this grand Yoshi adventure. A treasure trove of clever handicraft stages are ready for you to explore. Unravel their secrets and color your world with a spectrum of yarn balls to knit new paths and get every last collectible.

Knitting yarn, patchwork, and other handicraft materials combine into a whimsical and crafty backdrop for our knit Yoshi to explore. Instead of eggs, this time Yoshi tosses yarn balls that he can use to clear blocked paths, tangle-up enemies, or even knit together platforms and warp pipes.

Check out 20 minutes of Yoshi’s Woolly World gameplay with Producer Tezuka’s commentary in this video.

Tackle challenges in local 2-Player co-op by partnering up with a friend. Gobble ‘em up and spit ‘em out to reach new heights or take out craftwork creepers like paratroopas, piranha plants and shy guys! It’s time to get crafty.

Check out another full 20 minutes of Yoshi’s Woolly World gameplay in this video.

Puzzles: Unravel puzzles and walls to discover hidden areas and collectables. Collect, cooperate, and get crafty.

I’m so super excited that they have returned to the Yarn idea for Yoshi’s Woolly World.

Now that they have done it with Kirby & Yoshi, I’d love to see it also applied to a Mario game or some other property. It’s such an interesting idea!

Do you plan on buying Yoshi’s Woolly Wold when it hits stores on October 16th?