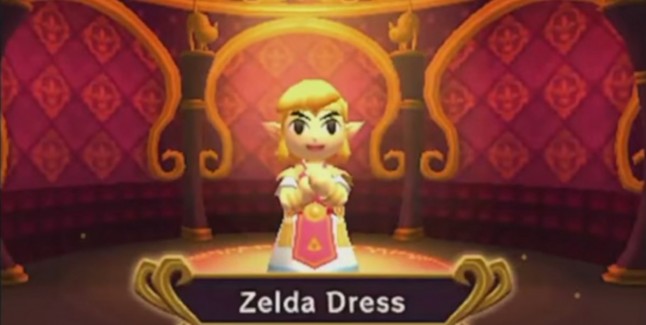 The Legend of Zelda: Triforce Heroes has been announced for Nintendo 3DS! Hitting this Fall 2015, it is an all-new top-down The Legend of Zelda game, inspired by the previous multiplayer Zelda: Four Swords games; but this time focusing on Cooperative play instead of Competitive play… And shining the spotlight back on serious puzzle-solving & Zelda dungeon gameplay.

Check out the debut gameplay trailer & background info from the developers of The Legend of Zelda: Triforce Heroes.

The main new mechanic is the idea of what Nintendo has dubbed “Totem”, like a totempole seen in Native American culture. That is the idea of stacking three Links on top of each other. From here, each player can attack at a different height at the same time! As you can imagine, this opens up all sorts of crazy puzzles to solve wherein each player must attack at a certain height.

This is combined with the extreme focus on depth & stereoscopic 3D achieved in The Legend of Zelda: A Link Between Worlds, to give this Zelda game real spunk.

Another new feature is new Armor & Costumes that Link will wear (including dressing up as a girl with the Princess Zelda outfit!). These will change Link’s abilities, and the dungeons will change as well, depending on how players are dressed! Costumes include the “Lucky Loungewear” and “Big Bomb Outfit”.

Zelda: Triforce Heroes looks like it will be just as much fun, if not moreso, than The Legend of Zelda: Four Swords Adventures! I love the fact that they borrowed from Four Swords, while completely changing the focus. I’m more of a puzzle-solving guy, and tackling Dungeons & Temples is among my favorite aspect of the Zelda series. So I absolutely dig what Nintendo is doing here.

Are you happy to see an all-new Co-OP Zelda spin-off with The Legend of Zelda: Triforce Heroes?