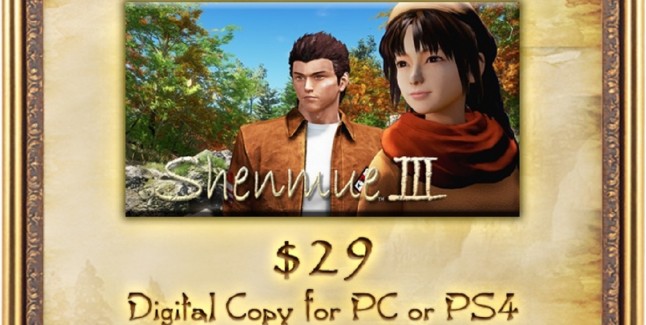 Shenmue 3 has been officially announced for PS4 & PC! That was the nuclear bomb that went off at Sony’s E3 2015 Press Conference! Back it now via Kickstarter and keep the dream alive!

Check out the debut trailer for Shenmue III, being funded by Kickstarter!

As you can see, Shenmue III is the true sequel that fans have been dreaming for! Until Kickstarter came around, as creator Yu Suzuki explains in the video above, it was considered a pipe dream that Shenmue 3, or the continuation of the Shenmue story, would ever actually become a reality.

But thanks to crowd-funding, and the promotion of Sony, Shenmue 3 reached it’s 2,000,000 (that’s two million!) dollar funding goal in only TEN HOURS. It is now possible to double or even triple this goal!

Shenmue III is being helmed by Yu Suzuki himself (Space Harrier, Hang-On, Out Run, After Burner, Virtua Fighter, Virtua Cop, Shenmue; often referred to as Sega’s Shigeru Miyamoto) with the permission of Sega (who owns the rights to Shenmue, which Yu Suzuki apparently purchased back), and developed by Suzuki’s new company, “YsNet”. It will be created using Unreal Engine 4 for PC & PS4.

It’s unknown at this moment whether Shenmue III will come to other platforms like the Xbox One, or whether the promotion by Sony at their E3 2015 Press Conference, has sealed the deal on Shenmue staying exclusive to PS4 on consoles.

“Shenmue 3 is the true sequel to the classic open world action RPG games, Shenmue and Shenmue 2. Created for modern platforms (PC and PlayStation 4) and built in Unreal 4, Shenmue 3 will continue the legacy of Shenmue.

With your help, we can #SaveShenmue and rejoin Ryo and our favorite characters on this new adventure!

Shenmue 3 will have familiar elements from its predecessors and new fight mechanics to achieve a new level of interactive storytelling.
If this project reaches its funding goal, Shenmue 3 will be available on the PS4 and PC.

Our ambition is to deliver a Shenmue experience that will draw in newcomers to the series and reward diehard fans with its deep story and rich gameplay.”

Why Kickstarter?
“Since the release of Shenmue 2, now 14 years ago, I have been greeted by the passionate outpouring of dedicated fans and Shenmue community members wherever I go. They all want to know one thing: “When will Shenmue 3 be coming out?” With the advent of games using Kickstarter during these past few years, the new and now frequent demand from the fans has been, “Do a Kickstarter for Shenmue 3!”
If Shenmue 3 was going to get made, I wanted to make it with the fans. Through Kickstarter, I knew that could happen. Together, with Shenmue fans everywhere, I knew we could build the game that the series deserves.

If we do not reach our funding goal, Shenmue 3 will not go forward. I know that the goal of making Shenmue 3 with the fans, and seeing Shenmue in the hands of gamers all around the world is a lofty one. We are balancing our ambitions for a grand sequel with the pragmatic realities of developing a game of this scale. It will not be easy, but I have dreamed of making this sequel for 14 years – it is time to bring Shenmue back! And to make it come true, it will need the love and support from each and every one of you!

So please join us in making Shenmue 3 – let us grow our community and build a new, exciting Shenmue experience!

Cast of Characters:
* Ryo – On a journey to avenge his father.
* Shenhua – Raised among the forests of China.
* Lan Di – Coldblooded boss of the shadowy Chi You Men.
* Niao Sun – Deadly siren of the Chi You Men

This is absolutely amazing news.

Thank God for Kickstarter! Can you imagine where the industry would be today without crowdfunding? It is because of Kickstarter that dreams like Shenmue are becoming a reality!

What a world we live in! And yes I’m aware that I just said this recently, but I’m once again blown away by yet another property getting a revival! And Shenmue of all things!

I never played Shenmue, but I actually currently own it on Dreamcast. I just never got around to playing it. I also owned the Xbox re-release of the Dreamcast’s Shenmue 2.

I do wonder how many people are being fueled by nostalgia and just a desire to see Suzuki’s dream come true (this would be me) and how many people have actually finished (let alone played) Shenmue 1 & Shenmue 2. I know there is a lot of fan love for Shenmue, and the game’s were ahead of their time, but they are not exactly the most polished or well-executed of experiences, and I think the vast majority of gamers have not played them, let alone count them among their favorite games.

I’ve heard that the first game, in particular, is a real chore to get through.

Either way, it looks like there is enough fan interest to keep the Shenmue dream alive! The only question now is whether Shenmue 3 will double, triple, or even quadruple it’s funding goal. There is already over 29,000 Backers and 2 million dollars earned, and the Shenmue 3 Kickstater Project hasn’t even entered it’s second day! It still has 31 more days to go!

Will this be the most-funded videogame project in Kickstarter history?

We’ll find out soon… But it is already in GOOD COMPANY with the following “Most Funded Kickstarter Videogames”:

How high will Shenmue 3 go?

Are you excited about Shenmue III and will you be backing the project?