EarthBound Zero aka Mother 1 that originally only appeared on the Japanese NES (Famicom) is OUT NOW for Wii U Virtual Console worldwide as “EarthBound Beginnings”! Glory hallelujah praise the Lord! 😀

Check out this launch trailer for “EarthBound Beginnings”; exclusively for Wii U Virtual Console!

That’s right, the original NES EarthBound game, known as “EarthBound Zero” by fans and “Mother 1” by hardcore followers of the “Mother” series (“EarthBound” outside of Japan) have AT LONG LAST received the game they’ve been asking & praying for! They’ve been begging Nintendo to officially re-release EarthBound Zero for nearly two decades!

And now it is finally a reality, with a new title, and is playable right this minute via the Wii U Virtual Console! 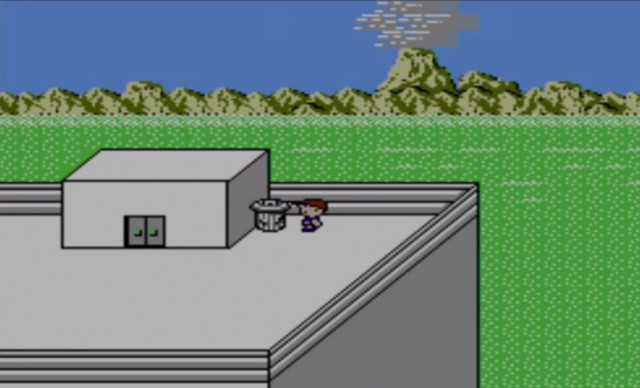 For those who don’t know what all the fuss is about, the original Mother is the prequel to EarthBound for SNES (which is technically entitled “Mother II” in Japan). Mother was originally fully translated into English and set for release near the end of the NES lifecycle in 1990 or 1991, but was then scrapped (and thus never released outside Japan) in favor of “EarthBound” for SNES, which wouldn’t come to the West until 1995.

But the reason the game is so infamous, is due to piracy. After Nintendo continously refused to officially re-release the game, hardcore EarthBound fans like those at the EarthBound fansite Mother.net, banded together and were able to release the Mother I ROM, in it’s English translated form, onto the interwebs. They titled it, “EarthBound Zero” and the game was fully playable and in English, just as Nintendo originally intended before changing their plans.

That version has been playable for over a decade now by using an NES emulator.

However an even better retranslated fan-made English version was also released online of EarthBound Zero, this version taken from Mother I&II Collection for Game Boy Advance, a compilation that was released exclusively in Japan (representing a dagger to the fanboy & fangirl heart) in 2001.

This updated fan translation is not only in English with better quality writing & improvements that Nintendo added to the GBA re-release in Japan; but it also includes an Easy Ring that balances the game and takes away much of the frustration of the original version (giving you more experience when defeating enemies, and cutting random encounters in half).

Even with the Easy Ring however, you can still encounter a new random fight every other step, so don’t be fooled; because of this, the original version of Mother I is nearly unplayable without the Easy Ring.

So that begs the question, which version is EarthBound Beginnings?

Hopefully Nintendo did the right thing and re-balanced it themselves, essentially giving you the Easy Ring and all the enhancements made to the GBA version. It will also be interesting to see if Nintendo added any other additional tweaks or additions to the script for EarthBound Beginnings.

Nintendo has finally listened to EarthBound fans and given us one of the most highly requested Nintendo titles of all time! Will Mother 3 be next?! COME ON NINTENDO! YOU CAN DOO IT!

I just recently played through EarthBound Zero, and let me tell you, it’s a GREAT game. I had loads of fun and an absolute blast.
Unlike EarthBound however, EarthBound Zero is greatly dated, and if you don’t like NES RPGs with their very minimalist graphics (I’m talking about green grass being represented by a solid color of green) and random battles (you don’t see enemies coming at you on the overworld in EarthBound Zero, unlike in the SNES sequel); then you definitely won’t want to sign up for EarthBound Beginnings. It is definitely one tough nut to crack.

However, EarthBound Zero lays the groundwork for what you saw in an evolved form in EarthBound. It sets the template, and you will see how the same character archetypes, situations and worlds were updated from Zero to EarthBound.

EarthBound Zero is also just a completely wacky, intriguing adventure from beginning to end. I absolutely loved it.

However it’s not as good as EarthBound. Because the graphics are more minimalist, less detailed, and repeat more often, the overworld is less fun to explore; and it’s easier to get lost.

Thus EarthBound truly is the proper evolution of EarthBound Zero and the game you should properly start with first (the stories are NOT connected).

Either way, you definitely owe it to yourself to pick up “EarthBound Beginnings” and give the game a shot!

Support Nintendo and support EarthBound by buying EarthBound Beginnings, so that we will assure the release of EarthBound 3 (aka Mother 3) for Game Boy Advance!

And personally, Earthbound Beginnings comes with my highest recommendation! If you do love oldschool gaming, then you will absolutely adore EarthBound Beginnings, so pick it up without delay!

WILL YOU BE BUYING EARTHBOUND BEGINNINGS?