Tony Hawk’s Pro Skater 5 has been announced for PlayStation 4, Xbox One, Xbox 360 & PlayStation 3, announced publisher Activision and all-new developers Robomodo & Disruptive Games, who are seeking the return of the Birdman in bringing this classic long-running Skateboarding videogame franchise back to the roots that made it great (in consultation with Tony Hawk himself, who has been heavily involved in the development of every game in the series).

There is no gameplay video or official trailer for THPS5 yet, but check out this video looking at five reasons one should be worried about part 5.

The Birdman is back with Tony Hawk’s Pro Skater 5, expected to release later this year. The game retains the timeless, combo-driven energy and tightly designed levels of the Pro Skater games while expanding the experience with online play.

“Skateboarding has always been about the freedom of ripping with your friends, and creating a game that captures that feeling has been a vision of mine since the Pro Skater series began over 15 years ago,” said Tony Hawk.

“I’m beyond excited to see that dream finally come true with Tony Hawk’s Pro Skater 5, which takes the old-school attitude of the original games online in a big way.”

Tony Hawk’s Pro Skater 5 rekindles the signature style of classic Pro Skater games in a brand-new set of levels with the same infamous focus on daring objectives, fine-tuned controls and high-score tricks – including manuals and reverts – for endless shredding.

New items like power-ups and projectiles change up the core skating experience in a variety of fresh and entertaining ways.

Online multiplayer is where Tony Hawk’s Pro Skater 5 truly takes off, letting players drop in and out of online skate sessions with friends and challengers from around the world for the first time.

Complete missions, unlock new content and level up online or offline, or go head-to-head on the fly against all takers in competitive matches. Players can also build their own imaginative skateparks to share with the community.

Unlike previous games in the franchise, Tony Hawk’s Pro Skater 5 gets rid of all the chafe that began to bog the franchise down once it hit open-world, Jack Ass-inspiration and more & more non-skateboarding-elements from THUG onward. Part 5 will cut all that off, and return to what made the franchise great in the first place: Skateboarding.

Tony Hawk’s Pro Skater 5 will be released this year, as the series celebrates 16-years of Skateboarding excellence, with THPS5 technically being the 10th game in the franchise. 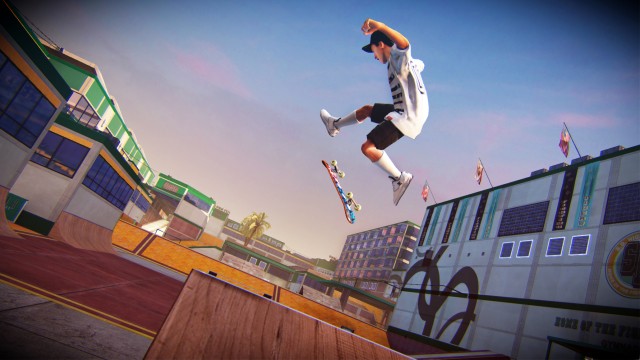 It’s great to see the Tony Hawk franchise come back, and I have high hopes that this back-to-basics approach will give the dormant franchise the boost it needs to make a full comeback.

By this point, so many gamers grew up with the franchise and it holds a lot of nostalgia for them; so I think this is the best approach to making a revival.

It’s fun to see that not only do we have Tony Hawk’s Pro Skater getting a reboot, but we also have Guitar Hero Live and Rock Band 4 reviving their respective franchises.

All are good things.

Are you excited about Tony Hawk’s Pro Skater 5?