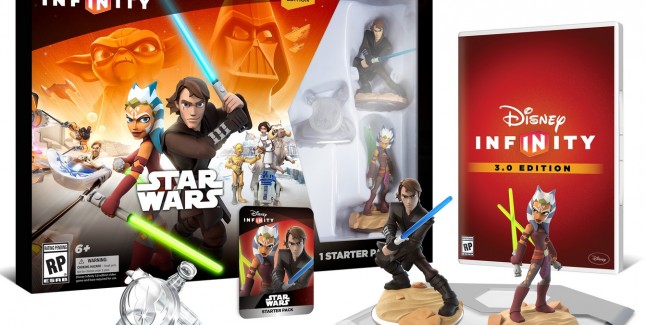 Priced at $65 for the Starter Set, Disney Infinity 3.0 adds Star Wars to the growing stable that already includes Marvel, Pixar & Disney characters, worlds & toy figurines to collect. It will be released this holiday 2015 for virtually every system (excluding handhelds): Wii U, PlayStation 4, PlayStation 3, Xbox One, Xbox 360, PC, iOS & Android. – Strangely no 3DS or PS Vita version, maybe in the future. In the meantime developer Ninja Theory has revamped the game’s combat, read more on that below.

Check out this debut trailer for Disney Infinity 3.0.

Disney Interactive announced that the Star Wars universe will join Disney, Disney-Pixar and Marvel in Disney Infinity 3.0 Edition – the latest installment of the best-selling “hybrid toy / video game” of 2014.

* Three Star Wars Play Sets, one set in the timeline of Episodes I-III, the second set during the original trilogy, Episodes IV-VI, and the third available this winter based on Star Wars: The Force Awakens.

* Additional Play Sets offering distinct gameplay and environments, including a Disney-Pixar Play Set based on the upcoming film Inside Out, and a Marvel Play Set featuring Hulkbuster Iron Man, Ultron, and other Marvel characters.

* More figures of fan-favorite characters from across The Walt Disney Company, like Mickey and Minnie, Sam Flynn and Quorra from Tron: Legacy, Mulan and Olaf, among many others.

“Disney Infinity is the only game where fans can play with Disney, Pixar, Marvel and Star Wars characters together in one experience,” said James Pitaro, President, Disney Interactive. “We worked closely with Lucasfilm to deliver an authentic Star Wars game experience, featuring some of the most iconic stories and characters from the past, present and future.”

Each of the Star Wars Play Sets offers distinct experiences, with varied gameplay, environments and characters.

The “Star Wars: Twilight of the Republic” Play Set takes place in the height of the Jedi’s powers, where players will use the Force and Lightsabers in epic battles and master their combat skills alongside Ahsoka Tano, Anakin Skywalker, Obi-Wan Kenobi, Yoda and Darth Maul.

The “Star Wars: Rise Against the Empire” Play Set will take players on galaxy-spanning missions with Luke Skywalker, Princess Leia Organa, Han Solo, Chewbacca and Darth Vader, piloting X-wing fighters or the Millennium Falcon to fight stormtroopers, or exploring and partaking in land-based missions on planets like Tatooine, Hoth, and Endor. Additionally, fans will have the unique opportunity to play with all of the Star Wars characters in all of the Star Wars Play Sets.

“Star Wars is a cross-generational franchise, and Disney Infinity 3.0 Edition creates an incredible opportunity for families and fans to relive their favorite Star Wars moments,” said John Blackburn, Senior Vice President and General Manager of Disney Infinity. “With the addition of Star Wars, Inside Out and new Disney and Marvel characters, Disney Infinity 3.0 Edition will be the most ambitious and diverse offering yet and also the most accessible, with a lower suggested retail price for this year’s Starter Pack.”

Disney Infinity 3.0 Edition will also introduce an all-new, 3-D Toy Box Hub that will make it easier for players to choose from a wider selection of gameplay experiences – including platform, racing, and farming simulation games. Two new multiplayer Toy Box Expansion Games will bring action-adventure gameplay in Toy Box Takeover and kart racing in Toy Box Speedway, where kids and families can play with popular Disney, Disney-Pixar, Marvel and Star Wars characters together in a structured setting. 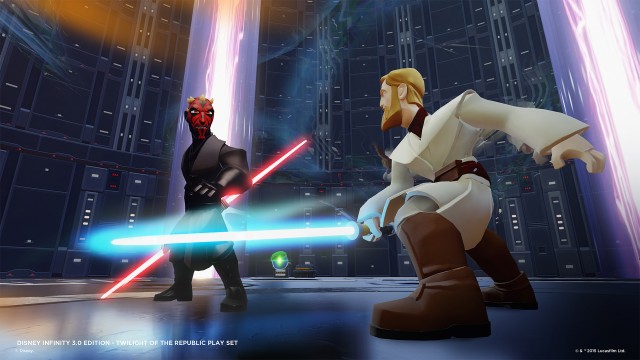 Fans will be extremely excited to know that the combat in Disney Infinity 3.0 has been completely rebuilt from the ground up . . . By none other than developer Ninja Theory!

These are the guys who created the 2013 DMC (Devil May Cry) reboot; as well as the critically acclaimed “Heavenly Sword” (2007, one of Ferry’s favorite games, as you can read in our Heavenly Sword review) and Enslaved: Odyssey to the West (2010, check out our Enslaved: Odyssey to the West review); as well as the upcoming PS4-exclusive Hellblade (also coming to PC).

Basically the combat in Disney Infinity 3.0 is inspired by Devil May Cry and Star Wars: The Force Unleashed, allowing the player to create in-depth combos when fighting enemies. Drastically improving the gameplay from Disney Infinity 2.0 and adding tons of depth for hardcore gamers to master.

In addition to all the Star Wars goodness, it’s also important to note that fans of The Avengers: Age of Ultron (still playing in theaters if you haven’t seen it) will be very happy that they will be getting a Playset; and fans of Star Wars Episode VII: The Force Awakens, will also be well taken care of, when a PlaySet based on that game hits around the time of the films launch on December 18, 2015 (ten years after Star Wars Episode III: Revenge of the Sith… Ten years?! CRAZY).

It will be interesting to see however, now that Disney have covered all the MAJOR bases (Pixar, Disney-proper, Marvel & now Star Wars); where the company goes next for Disney Infinity 4.0.

Perhaps it can mine Disney Channel for properties that TV show youngins would be very excited at seeing in videogame form?

Are you excited about Star Wars entering into Disney Infinity with 3.0?

Here’s the Disney Infinity 3.0 Star Wars image gallery.
Click on any of these image thumbnails to see the full-size photos: 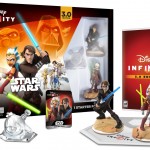 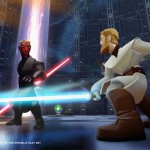