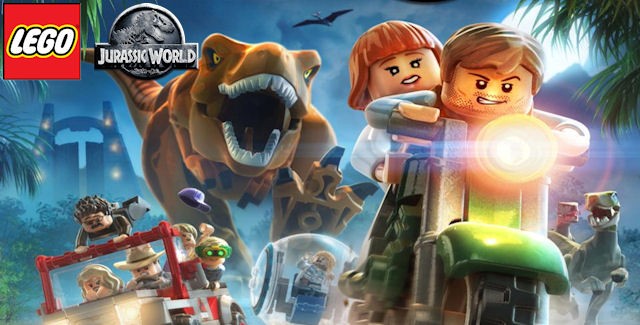 Lego Jurassic World is rated PEGI 7 in Europe & ESRB E10+ in America, for everyone 7 to 10 years or older. This game includes Cartoon Violence and Crude Humor.

The park is open. Welcome to the land of dinosaurs.

Reimagined in LEGO form and told in TT Games’ signature classic LEGO humour, the thrilling adventure recreates unforgettable scenes and action sequences from the films, allowing fans to play through key moments and giving them the opportunity to fully explore the expansive grounds of Isla Nublar and Isla Sorna.

Question: How many playable characters are in the game?

Answer: There are 100+ playable characters in the game. That is, if you’re not counting the 6+ downloadable content (DLC) characters announced so far.

You can also save up multiple custom characters using the game’s character creator in the grey pyramid building, on the bottom-half side of the left island (Isla Nublar from Jurassic World). Inside the building enter the cowboy bar door with the two Jurassic World logo screens left of it to find the “Character Customiser” area.

Question: How many playable dinosaurs are in the game?

Answer: There are 20 playable dinosaurs in the game.

Collect LEGO amber and experiment with DNA to create completely original dinosaurs using the game’s dinosaurus creator in the grey museum building, on the top-left side of the left island (Isla Nublar from Jurassic Park) and a second one in the Jurassic World Innovation Center. Inside the building enter the door with the DNA logo above it to find the “Dinosaur Customiser” room. Dinosaurs can be brought into the open world areas via the big blue Dino Call-In Pads that have a honey-cone structure to them.

Answer: This can only be done while you’re in Free Play mode (it doesn’t work in Story mode) by pressing the “switching characters” button. You can only buy a character that you have already unlocked or found the Character Token of, by holding the Triangle button on PlayStation systems / holding the Y button on Xbox systems / holding the X button on Nintendo systems, to bring up the character menu. When you see that character menu, then select the black silhouette of the character you want from the grid and select “Buy” to make it available for you to play with in Free Play mode.

Important Note: Unlocking characters usually involves completing story missions, bonus objectives, or finding their token hidden throughout the overworld HUB area map. To find out how to get all the characters in the game, please look at our upcoming “Lego Jurassic World Unlockable Characters Guide”.

Question: How to buy vehicles?

Answer: Go to the open world hub to access the grey Vehicle Call-In Points. You can then unlock the vehicles you’ve found Vehicle Tokens of / unlocked through story progression — by holding the Y button on Xbox or Triangle button on PlayStation or X button on Nintendo — to bring up the vehicle grid and selecting them to buy them.

Question: How do I get into Free Play or replay a Story Level?

Answer: What you need to do to get into a Story level again — or try the Free Play mode after completing Story mode (which unlocks Free Play) — is select the level from the kiosk stands all over each movie’s hub area. They can be found where ever each movie’s hub transit starts or ends. Interact with the kiosk to get the choice to start playing the default Story mode or select Free Play mode before entering the level. Note: You can even select which mission/checkpoint you’d like to start the level at if you already finished it.

Answer: None found yet, but we’ll keep you updated on the “Lego Jurassic World Glitches” page listed above.

If the game does freeze up on you. You can restart your game system after it freezes and you’ll be able to start the Level over.

Question: Where is the Red Brick Station to buy Red Bricks at?

Answer: The Red Brick Station is the location where you go to to buy the Red Bricks you found in the game… In the open world HUB area’s map, go to the top-left side of the left island (Isla Nublar). It’s located in the grey museum building and its screen is right by the building’s entrance. — Buying Red Bricks here will unlock new cheats you can then activate via the game’s pause menu.

100% means that using this walkthrough and our location guides (listed at the top of this page), you will see how to solve all puzzles, get all characters, dinosaurs & vehicles unlocked, and see where to find all Minikits, Red Bricks, Amber Bricks, Gold Bricks, as well as where to rescue all Worker in Peril’s. You are a heroic survivor after all!

Your voice-over guide through all the levels will be Brian.

Let’s have some family-friendly fun and a brick-smashing good time! Get ready to roar like a dinosaur! 😀

With the Lego Jurassic Park walkthrough now started, in the second level we get to play as the game hunter Robert Muldoon and Dino Handler Vic. Then dino expert Gerry Harding, Dr. Allie Sattler and a Triceratops dinosaur!! 😀

• Level Theme: “The Calm Before The Storm”

• Level Theme: “Objects In The Mirror”

The fourth level is where we get to run around the island… no really, you better run or risk getting stepped on by dinosaurs!

• Level Theme: “Decided Not To Endorse Your Park”

Brick Interaction Tips: When switching characters in Free Play for each character you’ll get a list of his/her/it’s special abilities!