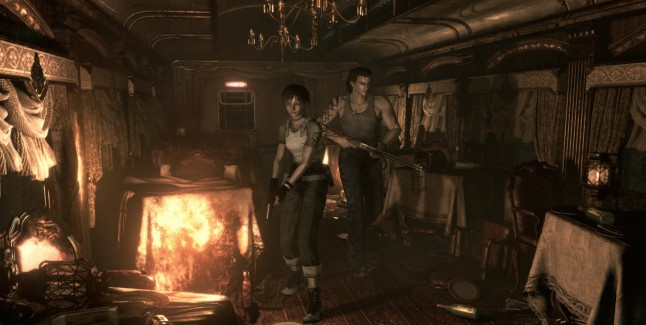 Both series fans and newcomers alike can experience the story of what really happened before the iconic mansion incident that was the catalyst for the entire Resident Evil saga.

RE0 puts players in the shoes of two protagonists—S.T.A.R.S. Bravo Team’s resourceful but green rookie Rebecca Chambers, and Billy Coen, an ex-Navy lieutenant on death row. Throughout the game, players will take control of both characters, with the ability to switch control between the two on the fly. Learning the advantages of each character will be key to surviving the nightmare.

The story of Resident Evil 0 takes players back to 1998. Reports have been mounting about unusual murders on the outskirts of Raccoon City. The city’s Special Forces division, S.T.A.R.S., sends their Bravo Team – including rookie cop member Rebecca Chambers – to investigate. On route, the team’s helicopter suffers engine trouble and is forced to make a crash landing, where they find an overturned prisoner transport vehicle. Splitting up to search the area, Rebecca discovers the Ecliptic Express, a train stopped dead on the tracks. Inside, she meets death row convict and ex-Navy lieutenant Billy Coen. Throughout the game, players will take control of both Rebecca and Billy, at times switching between both characters in order to proceed. Learning the advantages of each character is the key to solving puzzles and surviving the nightmares that lie ahead.

• Return to the series origins – Discover the truth behind what led to the horrors at the Mansion in Resident Evil in this fan-favorite and popular prequel title to the series.

• Completely enhanced visuals – New high-resolution textures have been created from scratch, including 1080p support on next-gen consoles, while still preserving the classic appearance of the original release.

• Relive the classic horror in either its original settings or modified to modern-day standards:
– Experience the horror in the classic 4:3 ratio or newly added 16:9 widescreen mode.
– Play with the classic control scheme, or enjoy a new alternative scheme where the character moves in the direction of the analogue stick.

Original Resident Evil 0 Director Koji Oda and additional staff are returning for the development of this new remastered version.

Here’s a new video message (with subtitles) from Director Koji Oda and Producer Tsukasa Takenaka about the project:

Resident Evil Zero is a game that just looks absolutely phenomenal. Even though it’s from 2002, if you play the GameCube version today, you still will stop just to admire the incredible graphical detail; especially when you are in the train (such as being able to see water rippling from the train’s vibrations in a dish in the foreground).

Once you leave the train, the game becomes a lot more standard; but I still love the scary environments and the creepy music & moody atmosphere.

I also consider Resident Evil 0 to be the SCARIEST outright Resident Evil game. The combination of highly detailed graphics, creepy music and tough difficulty make it very eerie. The game will especially make you piss your pants every.single.time, you encounter the Leech Enemies; which are humanoid creatures made up of thousands of Leech’s.

They are tough as all hell, attack you ferociously and can whip you from afar, and spawn intense music at every encounter. It is VERY HARD not to panic as soon as you hear that music. Nine times out of ten you will run clean in the other direction; and if you do fight, you are often left injured and completely out of ammo (and cursing yourself if one of your Molotov Cocktail throws MISSES!).

When taken as a whole, Resident Evil 0 isn’t very iconic; especially when stacked up against other games in the series.

There is no “Nemesis”; no leather-clad hunter like in Resident Evil 2’s latter half, or iconic “Police Station” to explore with it’s fantastic music; or dogs-breaking-through-windows or zombie-chewing scenes like in the original game (much less “Jill Sandwich” or “Master of Unlocking” phrases)… or making the first transition to polygonal 3D as in Code Veronica (in fact RE0 returned the series back to gorgeous pre-rendered backgrounds) or a pretty-boy named “Steve”…. You get the picture.

However regardless of all that, even though Resident Evil 0 isn’t iconic or isn’t AS memorable when taken as a whole; it still has many memorable & standout moments for those who’ve played it (especially if you’ve played it more than once).

From exploring the train & seeing the first Leech Enemy as described above (these foes are confusingly named “Mimicry Marcus”, officially); to the first time reaching the Training Center, to the moment when you reach the church, to crawling along the top of the train; to the fleeting times when you get to actually see the dark night sky (an old-school Resident Evil rarity)…. To the first time you reach the dungeon depths…. To the moment when you get to fight some completely unorthodox enemies loosed from cages (or jumping out of pools of water)….Resident Evil Zero is highly underrated.

And the more you play the game, you more you fall in love with it.

As I’ve said, REZero has climbed the list to become my third favorite game in the series (following Resident Evil Remake and Resident Evil 4; and engaged in a back-&-forth, life-to-death dual with Resident Evil 2. It’s hard to choose which wins out between them though. My pendulum always swings to & fro).

However Resident Evil 0 is definitely the bastard-child of the franchise. Very few people have played it; and it’s oft-forgotten and lil-remembered. Despite Capcom’s insistence at it’s popularity, it is by far the worse-selling game in the franchise.

The original Resident Evil sold some 4-5 million copies on the original PS1 & Saturn, with the GCN remake selling over 1 million.

Resident Evil 0 meanwhile sold a meager 1.25 million copies, below that of Resident Evil Remake at 1.35 million (although I’d doubt these sales figures; which are via vgsales.wikia and are only initial sales within the first year or two).

Resident Evil Remake is by far the more popular of the two games, as many gamers don’t even know Resident Evil Zero exists (much less have played it. Even less have actually beaten it. It’s quite tough!).

And of course, the recent Resident Evil Remake HD Remaster for Xbox 360, Xbox One, PS4, PS3 & PC quickly became the fastest-selling digital-exclusive game in Capcom’s history; surpassing one million copies sold across all platforms in three months; spurring Capcom to mine Resident Evil 0 HD Remaster as it’s next release!

And while Resident Evil Zero is the bastard-child of the Resident Evil franchise, I have NO DOUBT that the HD Remaster will give the game new life and finally get Resident Evil 0 into the hands of many gamers who never got to play the original. Giving it the recognition it deserves at long last!

I hope Capcom really goes the extra mile with this release. I’d love to see a ton of DVD-style Extras and Special Features, such as behind-the-scenes videos; making-of featurettes, developer commentary as you play the entire game, a music player, unlockable bios & enemy bestiary, a look at how the developers settled on the final designs for the environments, plot, and enemies; especially the Mimicry Marcus Leech Enemies; and a feature that allows you to compare or even REVERT the Train Scenes back to the N64 originals! As well as an unlockable PLAYABLE demo of the Nintendo 64 original of Resident Evil 0 (Zero was originally going to be released for 64DD around 1998, then N64 in 2000, then finally ended up on GameCube in 2002) and a feature that allows you to play the entire game in the N64 style!

Here’s a video of the original N64 version of Resident Evil 0 for those who’ve never seen it, or didn’t know it was originally an N64 title.

I hope Capcom gets really outrageous and really reward fans for making Resident Evil HD Remake such a commercial success and spurring the announcement of RE0 HD Remake.

Especially since Capcom saves money by not creating physical discs, they could use that extra cash to expand the featurettes & extras included in the game.

Resident Evil 0 is unique in that it was in development hell for such a long time, and moved between three different systems; as well as the HUGE graphical upgrade it got between the 64DD/N64 original and the GameCube finale.

So as you can tell, I am SUPER EXCITED about Resident Evil 0 HD!

The future of Resident Evil definitely looks bright; even if we have to mine it’s past to get there!

How excited are you about revisiting the Training Facility and the runaway train in Resident Evil Zero with S.T.A.R.S. Bravo Team rookie Rebecca Chambers?!

Do you think Capcom will do HD remakes of the whole series?