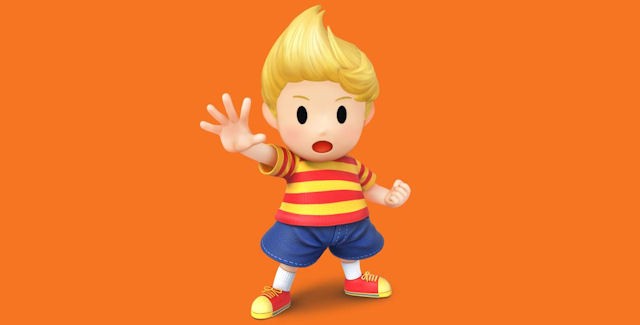 Nintendo has announced that the Super Smash Bros Wii U & 3DS Lucas DLC release date is June 14th, 2015. Expect the second new playable DLC character to cost $4/€4 for one version or $5 to get it for both games, like Mewtwo when that came out for all back on April 28th. Both DLC characters will get their own Amiibo later this year as well!

Watch the Smash Bros. for Nintendo 3DS / Wii U “Lucas Comes Out of Nowhere!” trailer:

The press release mentions that “An update on June 14th brings new content to Super Smash Bros. for Wii U and Nintendo 3DS, including Lucas from Mother 3 as a playable character, a new Wii U Miiverse stage and Mii Fighter costumes inspired by Splatoon.”

To celebrate this update, the game’s director himself Masahiro Sakurai will host a special video presentation exactly one hour before Lucas is made available, at 7:40AM PT / 15:40 BST/CET on June 14th, that outlines the details.

To tune in and see what the presentation holds in store, check out Twitch or Nintendo’s E3 2015 website, where the broadcast will be streamed.

Are you excited for Lucas to join the SSB fight?