Splatoon Demo Out Now! New Features Announced for the Wii U FPS 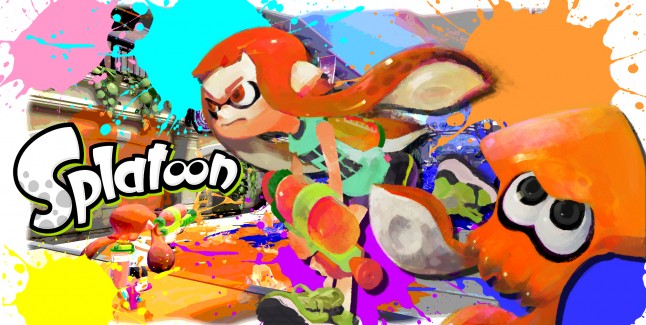 The latest Nintendo Direct presentation has revealed new Splatoon game features, including a free online Splatoon demo available right now, and post-launch content with special events happening throughout May; leading up to the Wii U first-person shooter’s (FPS) launch on May 29th, 2015.

Watch all the new announcements get revealed in the Splatoon Nintendo Direct here:

Are you a budding Inkling wishing to whet your tentacles before the launch of Splatoon on 29th May? Announced as part of a squid-dedicated Nintendo Direct, a free Splatoon Global Testfire demo is now available to download from Nintendo eShop for Wii U, enabling any Wii U user with a broadband internet connection to play – at specified time periods – up to 3 hours of 4-on-4 online Turf War battles on Saturday 9th May only!

Splatoon is a wild new game from Nintendo that combines the creative and family-friendly fun Nintendo is known for with ink-spraying, turf-claiming action. Just like Mario Kart changed the way family and friends play racing games together, Splatoon welcomes players of all ages and skill levels to the world of the action shooter.

Among a splash of new updates delivered by the team at the so-called Squid Research Lab during today’s Nintendo Direct broadcast, Splatoon users can look out for a raft of free post-launch content coming their way after 29th May, with the release of new stages, weapons, gear and modes that will continuously evolve the gameplay experience.

The Nintendo Direct announcements include:

• Global Testfire demo: Participants can download the free demo from Nintendo eShop for Wii U from 17:00 CEST today. This demo will then go live for 1-hour periods at the following times on Saturday 9th May: 04:00 BST, 12:00 BST and 20:00 BST. When live, users will get the chance to jump online and play in 4-on-4 Turf War battles against other players from across the world, including representatives of Nintendo’s Squid Research Lab! Players who download the demo can also claim a 10% discount off the price of Splatoon on Nintendo eShop*, with the offer starting on 29th May and lasting until 4th June.

• 4-on-4 online action: When the game launches on 29th May, players will need to think strategically when participating in online matches. Two stages are refreshed every four hours with an official announcement in-game to sound the changes, meaning players will have to carefully consider weapons and tactics for the stages that lie in wait. Different weapons work better in different stages, so players will discover depth in the weaponry as they focus their strategies on different 2-stage pairings. After each 4-on-4 match, players are randomly reshuffled to form new teams, so sometimes players will be working with their friends and other times they’ll be looking to take them down!

• Free post-launch content: Five stages available from launch – Urchin Underpass, Saltspray Rig, Walleye Warehouse, Blackbelly Skatepark and Arowana Mall – will get players off to a flying start, but new stages are set to be introduced every few weeks that require even more skill to master. As additional free post-launch content, players can also look forward to experiencing new weapons, as well as a Ranked Battle mode ominously named Tower Control. A major game update event in August will add further friend matchmaking functionality to enable 4 players to form a team and battle against other teams, as well as functionality to create private 8-player matches with just friends. Also coming in August is a mysterious third Ranked Battle mode, Rainmaker, a whole new line of items to spruce up a player’s battle appearance, plus more!

• Splatfests: Themed events called Splatfest will ask players from all over Europe to ponder the answer to simple questions such as… Do you prefer dogs or cats? Players must then choose a side and represent their side during Splatfest! These events will have their own ranking system, and based on a player’s overall rank, a valuable item called a “Super Sea Snail” may even be received once the event has ended, helping to freshen up your gear. Prepare for the first Splatfest on 27th June, with the theme being… Which music do you prefer: rock or pop? For this first Splatfest, Super Sea Snails all round to the winning side!

• “Color Lock” Mode: Are you color-blind? Don’t worry, the demo has revealed Nintendo has you covered. Splatoon’s “Color Lock” Mode/Option lets you lock the ink colors to specific combinations, for the benefit of the players who have difficulty distinguishing certain colors.

*Offer price: £31.49; regular price: £34.99 – Splatoon Global Testfire must have been downloaded from Nintendo eShop on the same Wii U before the purchase of Splatoon.

What I thought was cool is how waiting times are made null and void by letting you play new arcade games to pass the time till the next Splatoon match starts. 🙂

Has the demo made you excited to play more Splatoon?