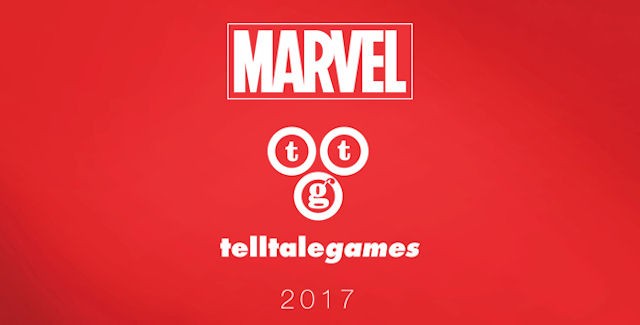 Marvel and Telltale Games have announced a graphic adventure game series based on an unconfirmed Marvel property! The game is set to debut in 2017.

Two to two-and-a-half years is a long time away, but it’s expected Marvel’s episodic series will make its way to PC, Mac, Mobile, PlayStation & Xbox platforms.

“Marvel and Telltale Games Teaming Up for 2017

Announced this evening in San Francisco, we’re excited to reveal an all-new partnership with the incredible team at Marvel Entertainment. We’ll be teaming up on the development of an upcoming Telltale game series project set to premiere in 2017!

As always, stay tuned here for the latest news and details on this and all of our upcoming projects as they become available…”

It could be anything Disney/Marvel throw at Telltale I guess. From The Avengers, X-Men, Spider-Man, and The Fantastic Four.

A quick look at Marvel’s 2017 roster of movies a game series could tie into, includes: Guardians of the Galaxy 2, Thor: Ragnarok, Wolverine, The Fantastic Four 2, and Spider-Man.

Which Marvel universe do you think this Telltale Games Series will be about?