Home » Reviews » Mac Review » The Wolf Among Us Review

The Wolf Among Us Review 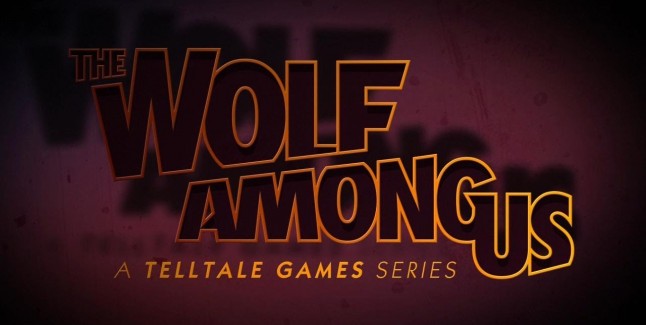 Here is my honest review of Telltale’s The Wolf Among Us.

Check out my interview with Bigby Wolf himself! The awesome, Adam Harrington 😀

FROM PAGE TO SCREEN 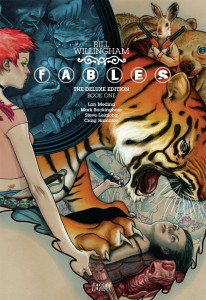 Like The Walking Dead, The Wolf Among Us is also a comic to video game adaptation called, Fables. Shortly after I started reading the Fables comics, I found out Telltale would be in charge of bringing these already classic characters, to life. It’s an interesting adaptation if you think about it though. The Wolf Among Us doesn’t just carry pre-established “baggage” set forth by the creator, Bill Willingham. More importantly, it takes classic fairy tale characters and paints them in a not so “happy-ever-after” kind of way. These are stories that MANY grew up watching, reading, and loving. It’s not easy to take a character as famed as Snow White or The Big Bad Wolf and tell a side story about who they are and what they’re capable of doing. Especially if that story is darker, grittier, and in a land not so far away. It’s a huge risk Willingham took to do this, but I’m glad he did. And I’m even more glad Telltale Games took that risk as well. This series does what many don’t. We don’t live up in the clouds with pink unicorns and fairies that grant our every wish. Sure, it’s nice to escape from the dark reality of things every now and then but I think it’s also good to see that even the brightest of stories, have their shady corners. In the game, you play as Bigby Wolf. But the most intriguing thing about this game is, even though he is the Big Bad Wolf…he’s not quite the only wolf among us.

The storyline was very interesting to me. Not only because I was already a huge fan of the comics but also because I love mysteries and detective stories. I have a very curious and imaginative mind so, everything about it immediately intrigued me. This was an interactive story where you played a detective…and not just ANY detective but THE BIG BAD WOLF! So much yes. Also, Telltale did a great job of telling it’s own story, separate enough from the comics to make it so that non-comic readers wouldn’t feel alienated. It was also different enough so that comic readers didn’t feel like they already knew everything. Sure, some things comic readers would be able to put 2 and 2 together but…only when it came to the obvious. We got to see new characters, returning characters in a different light, and a crazy plot twist that still leaves me wondering to this day. 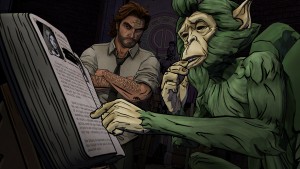 Nowadays, people are very used to associating video game “graphics” with some kind of visual advancement. Graphics need to look crisp, clear, and realistic because of all the technology that is now available. The Wolf Among Us didn’t have these crisp, clear, graphics. Instead, it had a very artistically fitting pallet. It looked and felt like a comic book. It looked like any other Telltale game but felt more like a “film noir” type of graphic novel that was being brought to life in front of you. It fit PERFECTLY with the series and added so much to the feeling of the game. The visuals, represented the story and the characters almost poetically. The darkness juxtaposed with the neon lights of the billboard signs almost seemed to represent the pre-established expectations of these “bright” fairy tale characters placed in a dark world.

Here I want to talk a little bit about the voice acting and the soundtrack because they definitely need a category of their own. The voice acting in this game was absolutely amazing. Everyone brought life to the characters they were voicing, no matter how major or minor the role. Adam Harrington, who voiced Bigby Wolf and the Woodsman, immediately became the voice of Bigby. And I don’t mean that in an obvious way…I mean, in more than just the game. Bigby Wolf is one of the main characters in the comic books so, Harrington was stepping into HUGE shoes. But his performance was absolutely flawless from the moment Bigby opened his mouth. He was perfect! He instantly became Bigby. Now, even when I read the comics, I hear Harrington’s voice. A lot of the voice actors in The Wolf Among Us aren’t new to Telltale Games. For example, Gavin Hammon who played Kenny in the Walking Dead, voices Beast. Melissa Hutchison who voices Clementine in the Walking Dead, voices Beauty and Toad Jr. Dave Fennoy who voices Lee in the Walking Dead, voices Bluebeard. And many more. So, these are class A voice actors. It was a great performance as a whole.

The music was something else. The theme song alone is absolutely mesmerizing. The composer, Jared Emerson-Johnson, did an amazing job at capturing the feeling of the series. Even though we had never “heard” this series, Emerson-Johnson just made the music feel like it had always belonged there. Like it had always been playing within the Fables comics but, we hadn’t heard it until now. 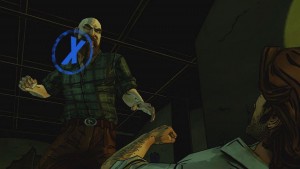 As many Telltale games, this is a point-and-click game with QTE’s (Quick-Time Events) and dialogue choices. I’m not a huge fan of point-and-click mechanics because it almost feels scripted as to where you need to go. There is a little white dot on every thing that you can interact with so, it’s a matter of just “follow the dots”. But, since Telltale is usually really good at how this mechanic is used, I end up not even paying much attention to this and pay more attention to the experience. I love the dialogue choices because even though it is extremely stressful to have a time limit to choose a dialogue option, it makes things feel more realistic. Impulsive. I love the choices because Telltale pretty much gives you the steering wheel to who Bigby is. Is he big and bad? Or is he trying to get away from that persona? Personally, I would have preferred a little more consequence for your actions. Even though you were given a lot of choice, it was evident that a specific story was trying to be told so sometimes no matter what you did, the outcome was the same. Or, sometimes things you thought would end up making a difference, turned out to not really have any part in what you were doing. But, again, the story that was being told was an intriguing one regardless.

The QTE’s…oh the QTE’s. Not my favorite form of gameplay ESPECIALLY in combat. Stresses me out like mad! But, it works for this kind of game. Anything else would almost feel weird and unfitting. It is stressful as hell and sometimes I swear I pressed the button prompted on the screen but these are also timed so, if you don’t hit it at a specific time, you miss it. Not my favorite. But, it really did “up” the intensity of the fight scenes.

This was pretty hard for me to score since this game is based off of a comic series and isn’t an original IP. Also, when it comes to gameplay, it’s pretty much the same template as other Telltale games. BUT, I couldn’t score it lower than this because it did have flair and cleverness of it’s own. The visuals, the music, the story, the twists and turns it took…it all felt refreshing to me. Different. Even for comic readers. That couldn’t have been easy to do for a comic series as widely established as this one.

The replay value for this game is not bad for several reasons. Mainly, the choices. Who is Bigby? What paths does he take? The ending is pretty much always the same but how you get there and what people think of you can be very different. BUT, even though there are different choices, there aren’t a WIDE variety of choices/paths that will drastically change your experience. There are pretty much 2 versions of Bigby to explore and each major decision has 2 paths. Also, the ending itself is a twist full of such amazing confusion that it makes you want to replay it in order to get a better feel for it and see it in a different light. Not to mention, it’s available on pretty much every device so that not only increases it’s replay value but also it’s practicality. AND, the fact that it was initially an episodic experience, kind of increased it’s replay value slightly because people that played it as the episodes came out, may now want to play the episodes consecutively to get a better feel for it.

I had a blast with this game. It was extremely engaging and kept me wanting to know more with each episode. My favorite thing about the game was definitely the character interactions. Every character that you came in contact with was so well written! And the WAY you could interact with them was just perfect. Another thing I really enjoyed about the game were the range of emotions it got out of me. There were moments where I almost felt the rage Bigby was feeling. Moments where I laughed, and others where I nearly cried. It was definitely a lot of fun for me.

FINAL THOUGHTS: So, overall, I thoroughly enjoyed The Wolf Among Us. I might be a BIT biased since I love almost everything Telltale Games creates, but I was as honest as I could be in this review. Telltale game fan or not. Fables Fan or not. The Wolf Among Us is definitely a game worth checking out for so many reasons: the story, the characters, the choices, and mostly, the fact that these are characters a lot of us grew up with! Some heroes and others were used as tales to scare little kids… the monsters that went bump in the night. In this game, they are ALL brought together so you could see what they do on a daily basis. This is what initially intrigued me. And after you play… it really keeps you wondering, who TRULY was the wolf?

So, what are you guys’ thoughts on QTEs being used in games? Do they work for some games? Or should developers stop making games with QTEs? Let me know in the comments down below!

Tags: The Wolf Among Us