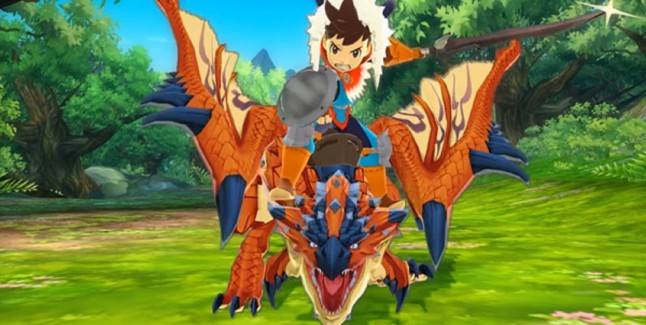 Monster Hunter Stories has been announced exclusively for 3DS in 2016 as the newest entry in the Monster Hunter franchise and the first straight-RPG title in the popular series, which is celebrating its 10th anniversary.

Give Monster Hunter Stories a look with this debut trailer (sadly, no gameplay shown).

Little is known about Monster Hunter Stories, but the game was announced by Capcom in Japan at the “Monster Hunter Fest 2015 Finals” where producer Ryozo Tsujimoto revealed the all-new title.

The trailer above gives us our first real glimpse at what to expect. The biggest change is in genre, going from what could be called an Action RPG, or more of an Action Adventure, to a more typical Japanese Role-Playing Game (JRPG); although whether that means we’ll see turn-based battles and things wasn’t made clear.

The second biggest change that’s easily noticeable is in tone and graphical style. It looks like this game may have a cel-shaded graphical style with a less serious, more goofy tone; And more of a light-hearted, cartoon-like aesthetic.

Here’s the Monster Hunter Stories image gallery.
Click on any of these image thumbnails to see the full-size photos: 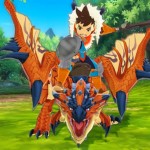 The third biggest change, as revealed by producer Ryozo Tsujimoto, is the fact that Monster Hunter Stories switches the focus from “Hunters” to “Riders”… And indeed you can see the little “Rathalos” monster being mounted and ridden in the trailer; where the main character then prepares to do some battle from “horseback” (er, “monsterback”) before the trailer cuts.

The tale that will be told in the game will go into detail on the difference between the Hunters & the Riders and their story.

It was also revealed that the core idea for Monster Hunter Stories has been kicking around Capcom for ages now, going back at least five years.

“After having passed the 10th anniversary last year, this is a new challenge for the Monster Hunter series, that we’ve began designing since about five years ago,” said Tsujimoto. “While staying true to the world of Monster Hunter, and a story that can only be told through an RPG, we’d like to pack it with fun and enjoyment that we can’t even begin to describe with words.”

“Monster Hunter Stories is still in the middle of development, we’d like to offer you a new kind of excitement that is different from the conventional series, and the development staff are working on it in full-spirit,” Tsujimoto concluded.

As you’d expect, no release date has been announced yet and the game has not been confirmed for release outside of Japan. But given the HUGE sales and all-time-high response that Monster Hunter 4 Ultimate for 3DS got overseas and outside of Japan; it’s pretty much guarenteed that Capcom will capitalize on the still-hot Monster Hunter excitement by releasing this spin-off Stateside.

It’s great to see the Monster Hunter series heading in a different direction and tackling a different genre with this new spinoff.

I definitely like what I’ve seen just from the trailer. Hopefully we’ll see more and get an actual English announcement at E3 2015 in June!

Are you excited about this new direction in Monster Hunter Stories?