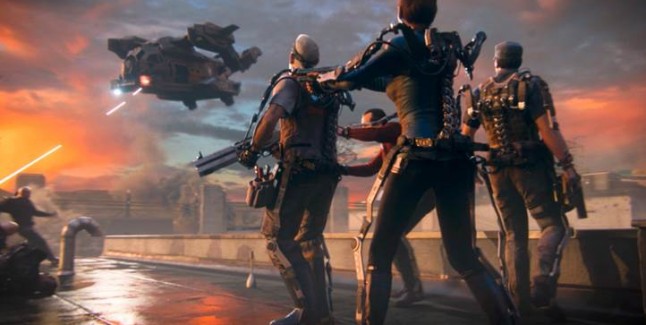 Infection is part of the Ascendance package for Call of Duty: Advanced Warfare, the second of four Exo Zombies maps that tie together a new storyline.

This is a full guide to complete the Infection zombies map. 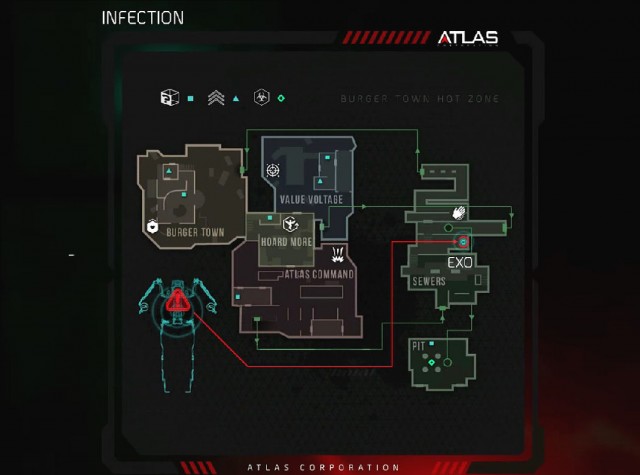 This exciting new Zombies cooperative mode called Exo Zombies features a story told through the eyes of four employees of the Atlas corporation, played by a celebrity cast consisting of John Malkovich (In the Line of Fire, RED, Burn After Reading), Bill Paxton (Aliens, Titanic, Edge of Tomorrow), Rose McGowan (Planet Terror, Scream), and Jon Bernthal (Fury, The Walking Dead). The actors provide their voice over and likeness in a dark and cinematic experience new to Call of Duty: Advanced Warfare.

This new mode brings the movements, abilities, and weapons of the exoskeleton into battle against the undead.

Here’s how to get started in Infection:

Intro: You enter a world where a DNA bioweapon unexpectedly spawns a bloodthirsty, ravenous mutant horde infecting an entire secret Atlas research facility and sending personnel running for their lives. Following a failed evacuation, four survivors, un-trained and underprepared, must face the most vicious mutations ever unleashed. The Exo Zombies co-op mode ushers in a new breed of Zombies and a truly unique experience, coming first to the Ascendance DLC Pack.

After being overrun at the Atlas research facility outbreak, our heroes awaken to find that the infection has spread and mutated the surrounding town. Before they can get any answers, they’ll have to fight their way out.

Exo Zombies Part Two: Infection introduces an expanded co-op map including a Burgertown franchise and all-new enemies like the giant Goliath Exo Zombies, Acid Drippers, and more. While the mutations have evolved, so has the technology. All-new traps and the Magnetron Microwave Gun will give our heroes a fighting chance, but just surviving doesn’t cut it anymore. In the new Civilian Extraction Mode, fellow survivors will need help escaping the growing horde.

Tip: Get a good team together of players you can rely on to revive and support you. Good team work is the key to success in Exo Zombies mode. — Still looking for other co-op players? Leave your online gamertag/username in the comments section below and let people know you’re a team player. It’s fun to make new friends. 🙂

Let’s begin the guide by showing you the first 10 minutes as an intro to the video guide. It shows from Round 1 where you can find the 3D Printers (mystery boxes) and Upgrade Stations.

How To Get Exo-Suits & De-infected Tips: The above guide video also explains how from the outdoor security checkpoint and/or hardware store you can gain access to the sewer. The sewer is important, because from the sewer you can walk to the Exo-Suits that are in there.

You’ll also find yourself going in and out of the sewer quickly to get de-infected at the de-contamination pad/station from the virus. — You may end up having to go there a lot more than in the first DLC, due to the grates in this map spraying the green zombie virus gas everywhere that infects you even on rooftops.

Mini-Boss Fight Hint: Every 10 rounds you and your team together will have to go up against the armored Goliath zombie that takes combined fire to take down. You’ll need a minimum of 3 or 4 players to beat him.

Survivor Rescue Hint: Save survivors to unlock your next weapon upgrade as a reward for guarding the survivor until the helicopter extraction point.

Alternately, not rescuing a survivor will give you a penalty like not being able to use the 3D Printer if the survivor dies.

Next, a tutorial on how to use the new “MAGNETRON” Microwave Support Weapon in Burger Town.

Zombie Tips: Zombies carrying EMP loads (called EMZ’s) will disable your EXO Suit if they hit you or if you attempt to boost away from them.

Remember to activate all traps Perks from zombies. That’s because after killing zombies they sometimes drop these Perk items that you can pick up.

The formerly-called Mystery Box & Pack-a-Punch Stations are now called the 3D Printer & Weapon Upgrade, respectively. These locations are also indicated on the map above with a questionmark box/square & up arrows/triangle.

Where to find the 3D Printer and Weapon Upgrade locations in Exo Zombies Map #2 is shown in this video guide with directions to their initial locations. With these Atlas machines you can arm yourself well.

UP NEXT: A full Infection walkthrough up to the ending!

Here are all the steps to take to finish the Infection easter egg puzzle:

STEP 1: How to open the Alter.

STEP 2: Where to find the Golden Frying Pan up top by jumping with the Exo-Suit.

STEP 3: How to fill up the Golden Frying Pan with blood to turn it into the Blood Sacrifice Pan.

STEP 4: This helps you find all 4 zombie meat locations. Then cooking the zombie meat with the magnetron gun to make a zombie hamburger. Once you hear a “Ding!” your hamburger is ready.

STEP 6: Find the Battery to power the Bubby statue. – It’s near the blue-lighted Bubby poster after you press the action button (X on Xbox) and keep running to the right, you’ll find the Battery location in the “Warning” labeled powerbox on a wall.

STEP 7: Next, go to the Burger Town Rocket Ship! Go inside the big burger via the stairs, and after looking around make your way back outside to the voltage station to charge the Battery at the blue light station. While it’s charging, you’ll need to defend it from zombie waves. Lastly, place the Battery in the Bubby statue.

STEP 8: How to get the Gator Zombie Hand. – Go down into the sewers and pay 500 credits to “Summon the Insta-Gator”. When the Alligators come up and start killing zombies you have to stand near a random Alligator when it drags a zombie down into the water to quickly pick up the zombie’s arm it leaves behind for a split-second by pressing the action button (X on Xbox) to grab it before it sinks.

With the zombie arm collected at the sewers, you can come back out to find an electronically protected safe with this text on it: “Restricted Access – Place hand on reader. Clearance Level C.” Activate that with the zombie’s hand to open it up and collect the red encrypted datapad.

Next, go back inside the giant hamburger to pick up the decrypted datapad from the middle panel. Following that go to the Bubby statue to activate it one more time and set it free… Which will unlock the “Meat Is Murder” ending achievement / trophy.

Congratulations! These should be all the details you need for completing the hidden Easter Egg puzzle in the new Infection map.

Big thanks to Tmar & Noah for the discoveries on launch day!