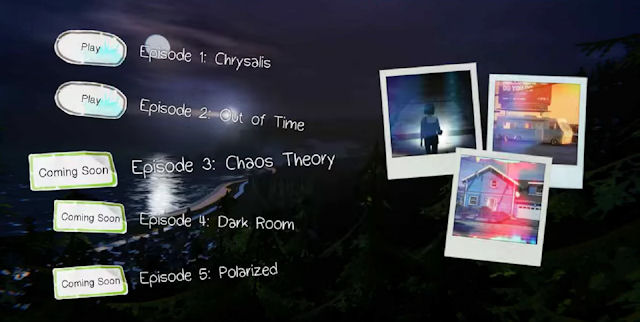 Square Enix and Dontnod Entertainment confirmed that the episodic, narrative driven adventure game Life is Strange releases digitally worldwide every six (to eight) weeks, with Episode 1 & 2 available now on PC, PlayStation 4, PlayStation 3, Xbox One and Xbox 360. The Life is Strange – Episode 3, 4 & 5 release date follows around every two months! 🙂 The full estimated release schedule for the rest of the season is…

Note: Episode 2 arrived 1.5 weeks later than the original schedule of every 6 weeks, so a delay of each episode by 1 or 2 weeks can happen. That’s why a developer commented on the Steam forum for the game that the new development time for each Episode is scheduled between 6 to 8 weeks. This is the nature of the episodic model; While you don’t have to wait a year for all parts of the game to be finished, you will more quickly notice development delays IF they happen. But they just make the game better.

Life Is Strange is a five part episodic game that sets out to revolutionize story based choice and consequence games by allowing the player to rewind time and affect the past, present and future.

You are Max, a photography senior who saves her old friend Chloe by discovering she can rewind time. The pair soon find themselves exposed to the darker side of Arcadia Bay as they uncover the disturbing truth behind the sudden disappearance of a fellow student.

Meanwhile, Max begins to have premonitions as she struggles to understand the implications of her power. She must quickly learn that changing the past can sometimes lead to a devastating future.

Watch the Episode 3 Preview Video for Life is Strange:

The Complete Season is available for pre-order:

April 17 Update: The game’s official Twitter page has confirmed Episode 3 is coming out in May. However, the date is to be confirmed. This means our May 5th date 6 weeks after Episode 2 may get delayed by 1 or 2 weeks until May 13th or May 20th after all. This falls in line with the developer indicated they’d like to take 6 to 8 weeks max to make each episode.

It's great to hear so many of you are excited for Episode 3 which will be released in May! (official date TBA) pic.twitter.com/jIp7upU2u9

May 2 Update: As expected, the May 5th release of Episode 3 — which was the first possible date 6 weeks after Episode 2 — won’t be happening. Life Is Strange developer Dontnod Entertainment confirmed via Twitter that it’s still set to arrive “in May” and clarified that “this is an episodic game where episodes are released 6-8 weeks apart.”

This means Episode 3 will be released on either May 12th or May 19th. The sooner the better!

To answer everyone asking me: the Life Is Strange Ep.3 will be released this month, and we'll announce the exact date as soon as we can! ????????

May 6 Update: Developer Dontnod Entertainment is getting ready for the Episode 3 release in the coming weeks. PlayStation and Xbox players will get an update to Life Is Strange this week in preparation for Episode 3! Version 1.02 will include “Necessary changes to get ready for the release of Episode 3.” It could still come out next week Friday (May 15th) if we’re sticking with a 7.5 week dev cycle for each episode, but as unlikely as that seems now, only time will tell. – Here’s their tweet about the update…

PlayStation users will see some small updates to Life is Strange today (Xbox will update in few days time) pic.twitter.com/VPlB73JDME

May 12 Update: Please note that as Tuesday May 12th passes us by, Episode 1 got released on a Friday, meaning technically Episode 3 could still arrive after 7.5 weeks. So we could still be seeing Episode 3 on Friday May 15th this week.

Of course a release next week Tuesday the 19th or Friday the 22nd are our last hope for Episode 3 to arrive within the maximum promised development cycle of 8 weeks. – Personally I wouldn’t mind them taking 9 weeks to finish each episode (until May 26th for Episode 3), if that means all future episodes are as amazing as the first two episodes.

Life is Strange episode 3 is still coming in May, release date will be announced as soon as its ready. Thanks all for being patient

May 13 Update: Aaaand it’s been confirmed by the creators that Episode 3 will arrive on May 19th! Knowing this will allow us to predict when Episode 4 & 5 will arrive more precisely, either after 7 or 8 weeks of development. See the list at the top of this page for the new dates.

We are happy to announce that Life is Strange Episode 3: Chaos Theory will be released May 19 http://t.co/Vtg8UdhOfJ pic.twitter.com/tWXHr3NGig

Here’s the letter from the developers to the fans:

We know you’ve all been eagerly awaiting news on Life is Strange Episode 3. It has been brilliant reading all your thoughts and theories from Episode 2, the response has been truly amazing!

We are really excited to finally announce that Life is Strange Episode 3 ‘Chaos Theory’ will be released May 19th.

In this next installment of Life is Strange, Max and Chloe’s investigation into Rachel Amber’s disappearance lead them to break into Blackwell Academy after dark, to search for answers. Secrets will be uncovered and Max will find another use for her power.

In a new screenshot [shown above], you see Max & Chloe attempting to break into the office of Principal Wells. What could they be looking for? What will they find?

Make sure you have played through Episodes 1 & 2 before continuing the story as your choices will carry over to Episode 3!”

Watch the Episode 3 Launch Trailer for Life is Strange:

May 19 Update: The Life Is Strange – Episode 4: Dark Room preview trailer has been added to this page!
It shows Max visiting an October 10th, 2013 “End of World” dance party. 😮

Watch the Episode 4 Preview Trailer for Life is Strange:

June 23 Update: Community manager Scott Blows asks your questions to the DONTNOD developers, where they answered everything Life Is Strange live from the E3 2015 show. Watch the 50-minutes-long Q&A below.

July 10 Update: The 6-8 week development window per Episode seems to have been thrown out the window in favor of giving us more polished future Episodes of Life Is Strange. The series looks to be on a 9-10 week dev cycle per Episode now, since they didn’t announce this week at San Diego Comic-Con 2015 it’s coming out next week. But don’t worry, it looks like we’ll still get a July release for Episode 4! 😀

In the meantime, get a behind-the-scenes look at in a new video that shows how they make the Episodes:

DONTNOD Entertainment recently visited BAFTA, London, where they spoke in detail about Life Is Strange in the ongoing ‘BAFTA Showcase’ series. — In the video Michel Koch (Co-Game Director), Raoul Barbet (Co-Game Director), Luc Baghadoust (Producer) and Alejandro Arque Gallardo (Designer, Square-Enix) share their design philosophies and reveal the intricate network of choices and consequences running in the background that determine the content of future scenes and events for the player.

July 15 Update: As mentioned at the top of this continually updated page, the July 2015 release of Episode 4 is still a go! As confirmed by Life is Strange’s own Twitter feed. They said “The wait’s nearly over! We are applying final touches to our most ambitious Episode yet.” and concluded with “Thanks for your patience.”

The wait's nearly over! We are applying final touches to our most ambitious Ep yet & we'll share more news ASAP. Thanks for your patience.

July 17 Update: Fun tidbit. Hannah Telle — the American voice actor for Maxine “Max” Caulfield in Life Is Strange — received a replica of Max’s shirt from the game’s creators at DONTNOD Entertainment. – I wonder if they will make these T-shirts available to all fans at some point? The official developer website at dont-nod.com doesn’t have a store at this time. And publisher Square Enix doesn’t have anything physical for the game in its online store either.

@lifeisstrangegame Thank you guys so much for sending me a replica of Max's shirt!!!???#maxcaulfield #lifeisstrange

July 23 Update: Aaaand it’s been confirmed by the creators that Episode 4 will arrive on July 28th! Knowing this will allow us to predict when Episode 5 will arrive more precisely, either after 9 or 10 weeks of development. See the list at the top of this page for the new dates.

Watch the Episode 4 Launch Trailer for Life is Strange here:

Episode 4 Synopsis: “Max realizes that changing the past can lead to painful consequences and that time is not a great healer. Her investigation into the disappearance of Rachel Amber begins to reach a thrilling conclusion as she finds the Dark Room. Will the answers lie within? Or will there just be trouble?”

July 28 Update: The Life Is Strange – Episode 5: Polarized preview trailer has been added to this page!
It shows Max in a rather precarious position with a new nemesis who likes to polarize his victims. Will she be able to turn back time to save herself and Chloe!? Expect a longer than 2 months wait to find out. 😮

Watch the Episode 5 Preview Trailer for Life is Strange at the top of this page!

September 21 Update: The official Life Is Strange Twitter account has confirmed Episode 5 is aiming to release on October 20th, 2015. Further adding this ominous quote: “Prepare to weather the storm.”

It’s only a week later than our estimate, and they admit that “This is the date we are aiming for.” So it’s still an estimate in itself. Fingers crossed they’ll make this target date!

The official blog by game Producer Luc from Dontnod Entertainment has the full details:

“We’ve seen that a lot of you can’t wait to play the Life is Strange finale and are eagerly awaiting a release date. The episode is getting closer to submission and we have almost completed development.

We don’t normally announce a date until we know the game is 100% ready but in the spirit of Max’s birthday (today) we wanted to let you know early that we are aiming to release Episode 5 ‘Polarized’ October 20.

Many things can change in the lead up to release but the team are working really hard to try and hit this date. We know the wait may be a bit longer than some of you were hoping for but we want to ensure Episode 5 is the best it can be.

Your tweets, comments and messages have kept us going through this busy stage of development and we can’t thank you enough for your continued support.

We are super excited for you to play the finale and we hope you enjoy the ride! We couldn’t have foreseen the great reaction Life is Strange has had so far, the community is fantastic and we love seeing/reading your reactions to each episode.

Share your thoughts, photos or anticipation for Episode 5 using #LISFinale
Thank you”

October 7 Update: The Life is Strange Finale Teaser #1 has been released! The storm hits in 13 days.

Here’s the second teaser for the season finale. Looks like we might get multiple teasers leading up to launch.

October 19 Update: Here are the Episode 5 launch times per system.

times for when the episode will be available for download. Please see a list below but please be aware these are approximates and store update times differ per region and country. For further information on this, I recommend contacting Valve, Sony or Microsoft support.

Are you excited to get a new Life is Strange Episode every 2 months? 😀