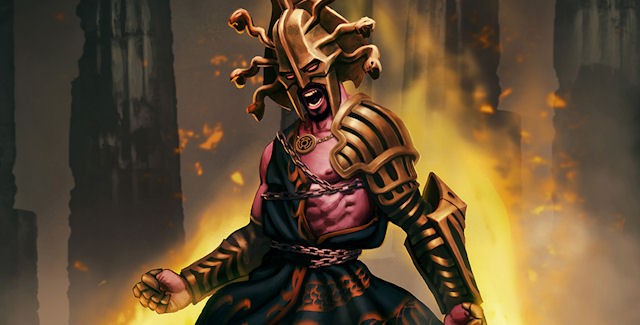 Infinite Crisis publisher Warner Bros. Interactive Entertainment was nice enough to share Keys for Champion Sinestro and his ‘Fearsome Tyrant’ Costume with us. This to celebrate the free-to-play PC MOBA game came out of beta and officially launched today! It’s on Steam now and we’ve got lots of Sinestro ‘Fearsome Tyrant’ Character Codes to give away! 😀

What should you do to get ‘Fearsome Tyrant’ Sinestro?

To get a ‘Fearsome Tyrant’ Sinestro Champion of your own, comment in the comments section below this article and we’ll reply to you there with a Character Code. (Available for everyone worldwide.) Yes, it’s that simple! 🙂

Feel free to request some Keys for your Infinite Crisis friends too. Don’t go overboard, but just say how many you’d like for your friends in your comment.

The free Key gives you access to the Champion Sinestro and his costume that normally cost 650 Crisis Coins in the Infinite Crisis Store!

April 26 Update: After one month, the last 300 of the 1,000 codes have been listed in the featured comment below!

How to redeem your Key:

This key will grant the Infinite Crisis Champion Sinestro, and his ‘Fearsome Tyrant’ Costume. – Featuring flaming arms, sinister eyes, and an imposing set of golden armor, the ‘Fearsome Tyrant’ costume is one you don’t want to miss!

A former Green Lantern and ally to Hal Jordan, Sinestro was eventually banished from the Green Lantern Corps for using his Power Ring in an oppressive fashion. He now uses his own yellow Power Ring, powered by fear. Sinestro is a Blaster who uses Will as a resource to terrorize and finish-off weakened prey.

Find out more about him in this official Sinestro Profile video:

What is Infinite Crisis about?

“Whether you’re new to multiplayer online battle arena (MOBA) games or only to Infinite Crisis, it’s easy to get started with our series of fun tutorial missions. Discover the role you’ll play in the survival of the Multiverse from DC heroes like Superman, Wonder Woman, Green Lantern, and Batman.

Learn the basics of the genre, what makes Infinite Crisis different, and practice your skills against AI opponents before jumping into great team combat with other players.

A sudden assault threatens the DC Multiverse. All realities stand on the brink of annihilation. Now, the last hope for Earth lies in the powers of the DC legends. Infinite Crisis blends RPG and strategy to create a fast-paced MOBA.”

To see what the game’s all about, you can watch the Infinite Crisis gameplay launch trailer here: