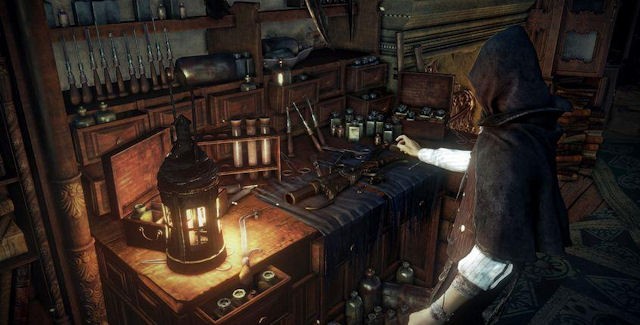 The Bloodborne trophies guide lists every trophy for this PS4 hack ‘n slash action-RPG game and tells you how to get and unlock them.

In the Bloodborne trophy guide we’ll show there are 34 Trophies (25 Hidden) that can be earned in the PS4 exclusive title. Earn Bronze (20), Silver (7), Gold (6), and Platinum (1) Trophies to increase your Gamer Level.

Tip: It’s recommended you go after the Hunter Set of Armor before the Boss fight in Central Yharnam.

The Hunter Set Armor location is shown in this video guide:

4. Weapon Master (Silver) — Acquire a weapon of the highest level.

10. Yharnam Sunrise (Gold) — You lived through the hunt, and saw another day.

11. Honouring Wishes (Gold) — Captivated by the moon presence, you pledge to watch over the hunter’s dream.

12. Childhood’s Beginning (Gold) — You became an infant Great One, lifting humanity into its next childhood.

15. The Choir (Silver) — Gain entry to the realm of the Choir, the high stratum of the Healing Church.

Where to find The Realm of the Choir & Upper Cathedral Key: The Realm of the Choir can be accessed from the Cathedral Ward area. But first you must find the Upper Cathedral Key in the Yahar’Gul Unseen Village. You come to this area after beating a boss called “The One Reborn”. From the spawn point you must follow the path on the left until you come to an area where a big monster shoots a laser beam at you. Here you must drop down on the right side to find the key.

Now teleport back to the Cathedral Ward and go through the door on the right side of the room you spawn in (you have to defeat the “Blood-Starved Beast” boss to open the door). Go up the tower and you will find a gate that you can open with the key. After that the trophy will pop.

16. The Source of the Dream (Silver) — Discover the abandoned old workshop, the source of the hunter’s dream.

Where to find the Abandoned Old Workshop: The Abandoned Workshop can be accessed from the Cathedral Ward area. You must defeat the “Blood-Starved Beast” first! He can be found in the Old Yharnam area. After this boss is dead a new door will open up at the spawn point of the Cathedral Ward. Go through the door on the right and use the elevator to get upstairs. You must then drop down a ledge on the right side of the tower. Now go inside the tower (where it’s really dark and there are lots of wooden platforms). There is a tiny platform on the wall of the tower. You must roll down onto this platform. Be sure you have enough health or you will die from the fall!

After you’ve made it to the wooden platform you just need to drop down to the gate, open it, and enter the abandoned workshop area.

17. Nightmare Lecture Building (Silver) — Gain entry into the Byrgenwerth lecture building, that drifts within the realm of nightmare.

Location: The Father Gascoigne boss fight takes place in the Central Yharnam area (in the graveyard).

Tips: Father Gascoigne is the second boss in the game. Bring some molotovs to this fight! You can buy them in the Hunter’s Dream headquarters.
The first part of the fight is easy with the Hunter Axe (transform it into the bigger two-hand version by pressing L1). Hold down the R2-Button to power up a strong attack when Father Gascoigne is heading your way. Timing is very important here and you need to get a good feeling for the distance between you and the boss. If you are too close he will hit you before you can perform your power attack. If you are too far away you will miss him and he may land a couple of devastating hits on you. Don’t heal yourself right away after getting hit. Try to land a counter attack first as it will restore the health you’ve lost from the last hit and at the same time it damages the boss. When you’ve got the timing down you will barely need any health potions (only use them when you’d die from the next hit).

Using the R2 power attack will knock him over for a short moment. Now stand near the boss and wait until he gets up to strike you. Walk away just far enough so he won’t hit you and perform another power attack with the axe (don’t evade as it will delay your follow-up attack). You just need to wait for the boss to run into your Power Attack and repeat the process. You can also attack him from behind the tombstones and trees.

When he transforms into the monster (30% health left) you should keep throwing molotovs at him quickly. Don’t mess around for too long as he will jump you and it’s hard to evade his attacks. In this final monster form he is the strongest, so you should finish him off as fast as possible. Avoid melee combat when he is in his monster form (he strikes too quickly and does too much damage).

Tips: Vicar Amelia is the third boss in the game. There are four types of items you should bring to this fight: Oil Urns, Molotov Cocktails, Rope Molotov Cocktails, Numbing Mist. All of them, except for the Numbing Mist can be bought from the shop in Hunter’s Dream (the Mist can randomly be looted from enemies). Get 10 of each and make a backup of your save game on a USB Stick or the PS+ Cloud just before entering the boss fight zone. In case you lose the fight you copy back your save game to retrieve all items and will spawn in front of the boss again.

When you hit Amelia with Oil Urns you can double the damage of the next Molotov you throw. The most helpful item, however, is the Rope Molotv. First of all, lock in Amelia with R3 to evade her attacks more quickly. The strategy here is to attack Amelia from behind with a couple of quick attacks until your staminia is gone. Now throw the Rope Molotovs on the ground while your stamina regenerates. Once you’ve regained your stamina you attack her again with quick strikes and repeat the process. This will eventually stun Amelia for a few seconds (if you deal enough damage in a short period of time) and you can keep attacking her with everything you’ve got.

When Amelia’s health gets below 30% she will try to heal herself (she will glow golden when she does that). To prevent her from healing you can throw a Numbing Mist at her (this will stop all healing immediately) or you attack/shoot her until she stops.

Because Amelia has so much health it is highly recommended that you level up a bit before this boss fight and put a lot of points into strength. Then your attacks will deal more damage and you can kill her much quicker. I was farming the same group of enemies around the Cathedral Ward for a couple of hours to boost my strength.

Tips: The Cleric Beast is the first boss in the game. The basic strategy for this fight is to attack him from behind at all times. He is very slow and will rarely hit you when you are behind him. Should he hit you, keep in mind that counter-attacking him with some quick strikes will replenish your health. So instead of using up your health potions perform some counter attacks right away and you will get your health back + deal some damage at the same time. Don’t waste too much stamina by dodging attacks. It doesn’t matter if you get hit, as long as you have enough stamina left to perform a bunch of quick counter attacks. Despite being on a very low level I didn’t have to use any health potions in this fight, simply because I performed enough counter attacks.

If you are really having trouble with this boss you can also throw Oil Urns and Molotov Cocktails at him. The Oil Urns will drastically increase the damage dealt by the Molotovs. This will take away a lot of his health and give you a good start for this fight.

Special thanks to From Software, GamerForEternity & Powerpyx for the list, tips & guide videos.

Please comment if you have any Bloodborne trophy unlock tips of your own. Kudos will be given. – Thanks for visiting!