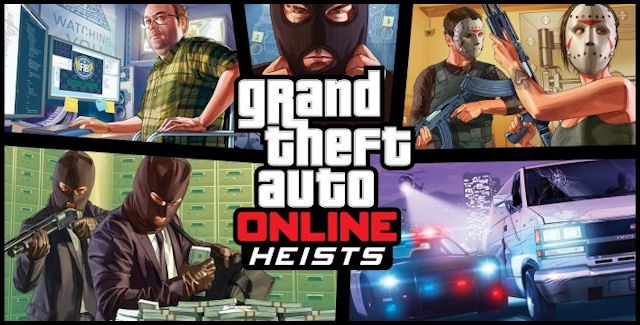 Here we will show you how to unlock all GTA Online Heists codes with a cheats list that’s valid for the PS4, PS3, Xbox One, Xbox 360 & PC versions. Where available.

How To Unlock The Hydra & Kuruma Vehicles

• How To Unlock The Kuruma: The Kuruma, an armored four-door sedan car, is a Heist vehicle that unlocks after completing the Fleeca Job’s Finale. Then you can buy it.

• How To Unlock The Hydra: The Hydra, a military VTOL fighter jet, is another Heist vehicle that unlocks after completing the Humane Lab Raid’s Finale. Then you can buy it.

How To Change Into a Cop Outfit

A newly discovered cheat lets you play in a Cop’s “The Officer” Outfit during Free Roam gameplay.

How To Play As A Cop: During the “Prison Break” Heist’s “Station” setup mission, for which you will be asked to pose as cops in a police station. Before you start, you’ll be able to select “The Officer” Outfit with a buddy and that lets you walk in and steal the bus schedule from the police station.

Then when you’re back outside from the police station, hit the Start button and from the pause menu’s “Online” tab go and select “Find New Session”. Next, pull out your phone and go to “Quick Job” and “Play Capture”.

– You’ll spawn into that Capture session with the police uniform still on, then change your glasses a few times as the first step to saving the police uniform, so every round of Capture you play you’ll want to change your glasses.
– The second step is to complete the Capture to really save the police officer uniform.
– Now for the final step. From the menu you get after completion of Capture, select “Freemode” to go to free roam. Once in free roam, immediately go to the nearest clothing store, and when you’re inside go to the cashier to save “The Officer” Outfit.

Note: Rockstar can patch this trick at any time.

Rumor. Some players have reported the BMX, Classic Coquette, Massacro and Bodhi added to their garage’s special car lists.

Since it’s a Garage Glitch, when selected a special car replaces the first car, and is only available for one randomly selected character only.

There are no other GTA Online Heists cheats on Xbox 360, Xbox One, PS3, PS4 & PC yet. So until more are discovered, we made the handy GTA Online Heists guides listed above to help you with tips and tricks for the game!

Do you know of any GTA Online Heists cheats or unlockables?
Let us know in the comments, you’ll get credit for finding out. – Thanks for visiting!